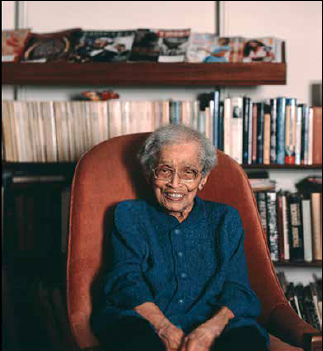 This week, the “Eclipse of the Century” cast a shadow across the nation on Monday, August 21, but not on Mrs. Jackson’s 100th Birthday, which she celebrated that day. She informed Our Time Press she spent the day in her Massachusetts apartment with her daughters, and is looking forward to a gathering of friends this coming Saturday at The W.E.B. DuBois Institute at Harvard’s Hutchins Center for African & African-American Research.

The former resident of Clinton Hill, Brooklyn – for more than 50 years — is a pivotal figure in Black history. Her work spans the 1930’s through the present, and includes involvement in the National Negro Congress, the fight against Fascism in World War II, the Southern Negro Youth Congress and the emergence of the 1960’s Civil Rights, Black Power and Peace Movements.

She was born and later raised in Arlington, Virginia, the daughter of an activist mother and teacher who served in the northern Virginia branch and president of the NAACP, and was an engraver and career Army officer. After graduating from Oberlin College (1938), she earned a master’s degree in sociology (1940) from Fisk University. She met her husband, fellow activist James E. Jackson, while working for the Southern Negro Youth Congress Voting Project in Birmingham, Alabama. At SNYC, she served as executive secretary and registered voters and fought for equal housing and employment opportunities. Mr. Jackson was a founder of the organization. They married in 1941.

For the 66 years of their marriage until his death in 2007, the Jacksons were considered mainstays of the struggle for African-American equality.

The Jacksons came to New York City in 1952, and later co-founded — with Shirley Graham DuBois, W.E.B. DuBois and Louis E. Burnham – (and later deemed managing editor of) Freedomways: A Quarterly Review of the Freedom Movement (1961-1986), a journal that featured the early literary and political writings by luminaries such as DuBois, Martin Luther King, Jr., Paul Robeson, Alice Walker, Lorraine Hansberry, James Baldwin, Ruby Dee and Ossie Davis, President Kwame Nkrumah of Ghana and many others. The magazine also featured covers by such artists as Romare Beardon, Jacob Lawrence and Elizabeth Catlett.

It is reported that “the publication was an important link between the northern and southern movements for civil rights. The publication enjoyed a national and international readership”.

Their lives and work are captured in Sara Rzeszutek Haviland’s 2015 book, “James and Esther Cooper Jackson: Love and Courage in the Black Freedom Movement”.

Mrs. Jackson was a co-editor of W.E.B. DuBois: Black Titan and Paul Robeson: The Great Forerunner. She penned such articles as “This is My Husband: Fighter for His People, Political Refugee” and “The Negro Woman Domestic Worker in Relation to Trade Unionism”.

In 1984, she received an Excellence in Journalism and Communications Award from the National Alliance of Third World Journalists. In 1989, the New York Association of Black Journalists presented her a Lifetime Achievement Award.

On March 29, 2010, she was honored at the “Phenomenal Women in Media” Awards ceremony at the Herbert Von King Cultural Arts Center in Brooklyn. The award, named after community activist Hattie Carthan, was bestowed on Mrs. Jackson for her “lifelong commitment to telling the stories of the African-American experience and connecting young people to their history and legacy”.

On October 16, 2014, Mrs. Jackson received an award from the National Domestic Workers Alliance at a conference on “Justice in the Home: Domestic Work, Past, Present and Future”. The conference at the Barnard Center for Research on Women was held almost 75 years after her ground-breaking study on improving the working conditions of Black domestic workers.

On May 8, 2015, the New York chapter of the National Organization of Black Law Enforcement Executives (NOBLE) presented her with its Presidential Trailblazer Award for her “outstanding contributions to the Civil Rights Movement”.

And at the end of 2005, the Jacksons signed an agreement with the Tamiment Library at New York University, setting the stage for the library to preserve the couple’s papers and other archival material and make them available for study, research and public exhibition by scholars and others.

Before relocating to Massachusetts, Mrs. Jackson left great gifts of learning materials for all ages at various institutions. She reports that papers, correspondence, classic artwork by Black masters, signed first-edition rare books and other materials from her vast archives were given to Medgar Evers College, City University of New York. NYU’s Tamiment Library and the Robert F. Wagner Labor Archives contains Esther Cooper Jackson’s notes, clippings and correspondence with many African-American progressives, historians and other researchers, including Robeson biographer Martin Duberman. The Brooklyn Historical Society, Schomburg and many universities are repositories for her interviews.

The Thinker’s Notebook: The Funniest Things are usually true.