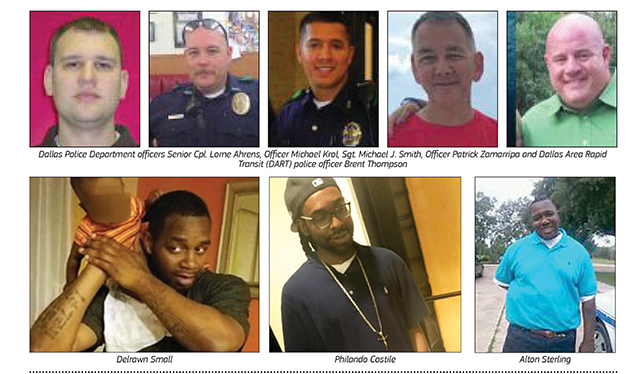 The major news outlets broadcast “Four black men are killed in one week by the police”. These men are:

The fact is more than the above listed men were killed by the police during the week of July 4th.  These other men were African-American, too and also Caucasian and Hispanic/Latino.  Apparently, the frequency of killing suspects by US police forces is such a concern to the American and international public that web sites exist for the purpose of keeping track of the activity.  English major daily The Guardian established The Counted: Police Killings in the U.S. website in 2015.  Killed By Police is the database that includes web links to news articles and photos of the killed people.  Another website is Innocent Down.  The website is so named because the U.S. justice system is based on the premise “innocent until proven guilty”.  Killing suspects circumvents the process.

This reporter went to the streets to obtain the public’s response to the question: “Do you have a reaction to the four black men who were killed in one week?” The Flatbush Avenue Street Fair and the Soul Summit at Fort Greene Park were the venues to meet the following New Yorkers:

Lisa McKenzie, Canarsie section of Brooklyn; McKenzie, a woman of African descent, was distributing literature at the street fair when I asked for her comments and reaction (she declined having her picture taken): “I think that everything done is a real tragedy.  More can be done to train the police.  They need training in human relations and compassion training.  They need to know that not every black man and woman is going to harm them…They are seeing color before “person”.

If a police officer is scared of black people, he ought to tell their supervisor if you think your life is in danger.  And in Castile’s case, he was in his car and stated he had a gun.

This is causing a lot of tension and people are getting scared of cops…  These four men that were killed in 48 hours were supposed to go home.  1% of cops are bad and all the cops need to be retrained.  I saw a video on Facebook with a female police officer reacting to this [situation].  She was startled by what she saw.  She said other things could have been done other than shoot.

Keith Williams, East New York section of Brooklyn: “Man is the only misfit in his environment.  All other animals kill for food; man kills for vindictiveness.  It’s unfortunate that we’ve come to accept killing without asking the questions.

Is it human culture or corporate/class or group of people responsible?  We need to get back to education…  It is Krisna Murti who said, “Education must be for the significance of life. Education when combined we’ve virtue if an asset of incalculable value.” These are things I embrace.  I don’t look at the news much.  Is news to inform about a catastrophe and to plan how to deal with it or to just gaze at the catastrophe?”

Austin Hannah, Prospect-Lefferts Gardens section of Brooklyn: “I think it is terrible.  I think it is racially motivated.  The police should be held responsible.  Good cops need to do a better job of weeding out the bad cops.  It reflects poorly on all police.”  Hannah’s associate Ganesh Samar of Richmond VA. interjected: “The worst part is the local police: they conduct the investigation afterwards.”

Darrell Adams, Canarsie section of Brooklyn: “It is troubling.  You fill empty in your stomach—feel nervous…  Another day, you feel helpless.  You don’t know what day it will happen to you.  History is repeating itself…  It gets

scary.  It is like you never know.  The first video, the two cops are holding the man down.  The second video, the Minnesota one. His child was in the back seat.  He had about 63 traffic violations…  It was like an execution.  [My] family in Georgia texts me frequently, asking me to be careful.

Joseph (last name not given), a man of African descent from the Flatbush section of Brooklyn:  Joseph declined being photographed because “I’m trying to get a city job”.

“If you’re scared to be a police officer, don’t take the job.  What is needed is better training in the academy to deal with communities of color–for black and white officers.  Some police officers-including blacks–turn into something else while on the police force.  They become “blue people”.  If you know there’s a bad cop, say something.  You should be able to turn in a bad cop without saying your name nor face retribution from your commanding officer.”

A Discussion of Police & Race