A Discussion of Police & Race
Advertisement 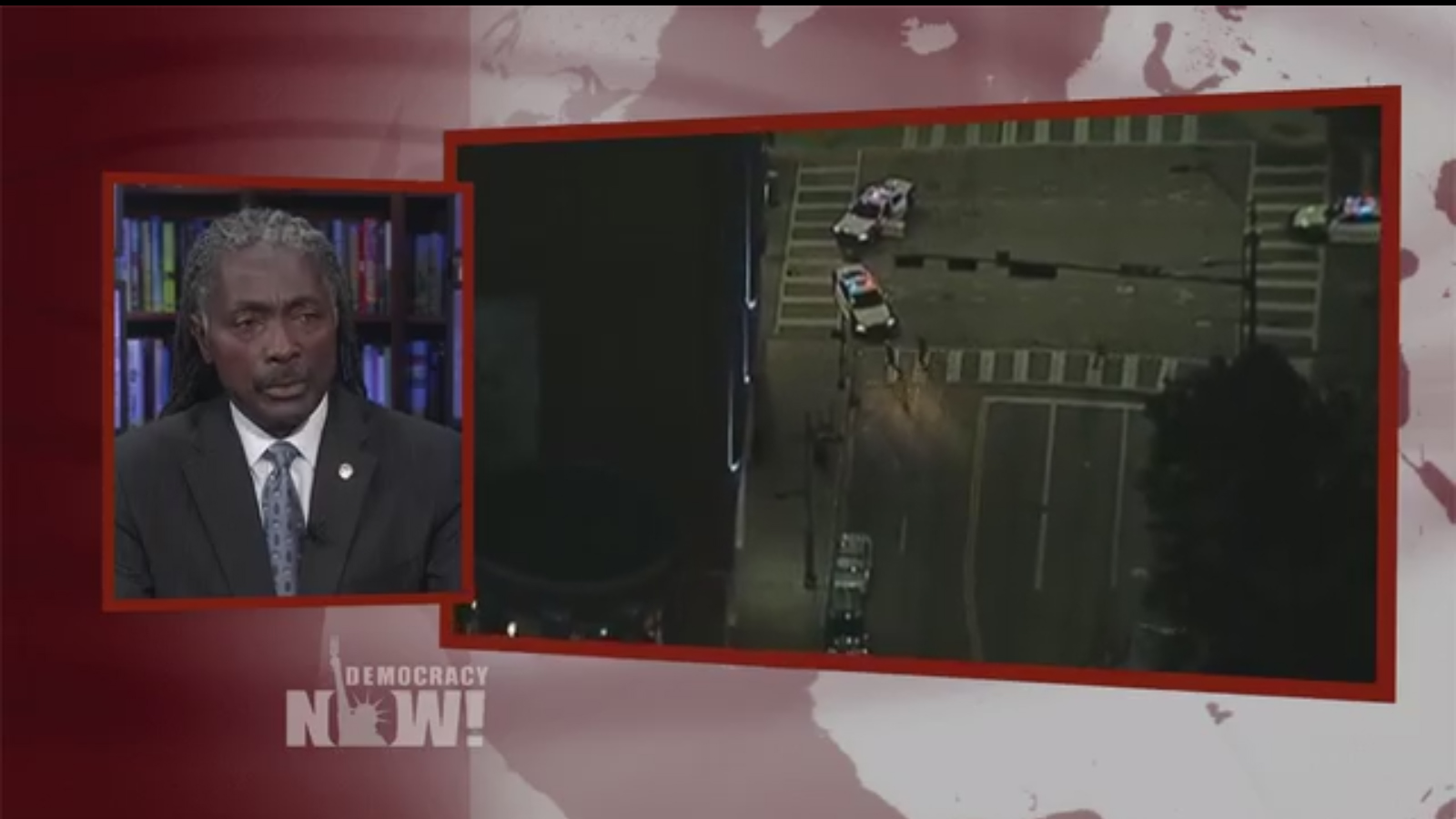 We begin today’s show with two guests. Graham Weatherspoon is with us. He’s a retired detective with the New York City Police Department. He’s also a board member of the Amadou Diallo Foundation. And Marc Lamont Hill rejoins us–journalist, distinguished Professor of African-American Studies at Morehouse College in Atlanta. He’s just written a new book, it’s called Nobody: Casualties of America’s War on the Vulnerable from Ferguson to Flint and Beyond. Welcome you both to Democracy Now! Graham Weatherspoon, let’s begin with you. Your reaction to the horror that unfolded last night, carrying on for hours in Dallas, just as this peaceful anti-police brutality protest was wrapping up, snipers opening fire on Dallas police.

GRAHAM WEATHERSPOON: Yes, the last three days have been numbing in this country, and we are at a very pivotal apex right now in terms of where this country is heading or where it will wind up very shortly. I’ve carried the caskets during my tenure. I have stood over people that I knew laying on the ground. My partner was shot in the face and I’ve had people try to kill me numerous times. But what we saw last night, and I didn’t know this until I woke up this morning around 6:00 — it took me back to a conversation I had with Ray Kelly a few years ago, and I asked him, I said, do you want urban warfare in the city of New York? Because people had come to me years ago after Amadou had been killed — and these were ex-military personnel — and they said they were tired of it. And they said, we’re going to start killing these cops. And I said, that’s not a good thing to discuss or even recommend. But it is a reality. There are people out here who — and we’ve seen it just in the political spectrum over the last few months with comments that people have made and just the fanning of the flames. We now know that whoever these individuals were, and I had said this to Ray Kelly, a bulletproof vest is not going to protect the police officer, not from someone who is using a high-powered weapon.

So, unfortunately, it has come to pass, not here in New York but in Dallas, and I pray it never happens here, but there are people out there who are not operating on all cylinders who have weapons. My son, who is in the military, told me some years ago that they were weeding men out of the military who were part of the white supremacist movement, and they were joining the military just to get the training. You know there are a lot of things going on in the back that you just — and the general public doesn’t have an idea of what is of — of what is happening.

So the FBI and JAG and other units of the government were trying to find out who those men were to pull them out of the military so they couldn’t get that type of training. But then you, you, you look at the situation last night. A peaceful demonstration erupts into total chaos. I did an interview yesterday on News One and I said, we cannot afford to move with the “eye for an eye” mentality. Innocent people wind up dead on both sides. We see this in Iraq right now with these insane bombings that are going on. We have seen it in Palestine between the Jews and the Palestinians. Nobody wins. There has to be a time where we come to the table to truly address the issue of race in this country. It is a cancer that has polluted not just this country, but it’s polluted the world. And until we choose to come and sit down and talk, number one, I believe that most Americans live in two states in this country. The state of denial and the state of fear.

MARC LAMONT HILL: I think we absolutely have to engage this question of race, there’s no doubt about that. We also have to engage the question of power, because everyday citizens don’t have equal footing with the state in order to battle the state, in the same way that I would argue Palestinians and Israelis don’t have the same footing. Right? One is in a position of power, one is an occupying force, one is not. The same with law enforcement in our communities. One is an occupying force and one is not. So, we have to look at that as well. And so, what — and I also want to be careful that we don’t link what happened last night to the Black Lives Matter movement, or the anti-state violence movement — resistance movement, because — and, and I know you’re not doing that, but that, that has been the instant, kind of, easy media narrative, and it becomes a sort of straw man. And that’s very dangerous.

AMY GOODMAN: I found, in watching the coverage of the horror that took place last night, people saying, oh, you know, look at what happens, they’re protesting police and then they’re killed. But, was it really protesting the police or is it a peace movement? It is for peace. There is no contradiction in being opposed the the killing of police officers and the killing of young black men who are stopped for their taillight being out.

MARC LAMONT HILL: Absolutely. I would argue any good revolutionary movement or radical movement or progressive movement is driven by humanistic principles. I have worked with, I have studied, I have organized with, I have marched with, and I have covered, as a journalist, the Black Lives Matter movement and anti-state-violence activists all around the country for the last two years. And not once has the question of shooting police come up. In fact, when we go to these rallies and we see people beginning to cause problems, we try to weed them out. When I was in Ferguson, the biggest thing — problem we had was that some of the, sort of, extremists would come in, and particularly anarchists, and would try to kind of colonize the movement and turn it into something that it’s not. The Black Lives Matter folks said on Twitter today, this is a movement driven by a sense of dignity, a sense of peace, a sense of purpose. We want to end violence against the state. We don’t want to reverse relations of oppression. We don’t want to turn into killers. We want to stop the practice of killing. We don’t think the state has the moral authority to kill us, and we don’t want to go around killing cops.

So, even if there is an outlier who happens to be an activist, and I don’t know that to be the case, but even if there were and outlier who, who was somehow considered self, self identified as an activist and they shot a police officer, that’s not a reflection on the movement, that’s not a reflection on our principles anymore than the, the Klan members are a reflection of the Tea Party. There are certainly Klan members in the Tea Party, but that’s not the organizing principle of the movement and certainly that’s not the case for Black Lives Matter or any of these other kind of anti-violence movements.

AMY GOODMAN: This issue of guns. President Obama said from Warsaw, we also know when people are armed with powerful weapons, unfortunately, it makes attacks like these more deadly and more tragic. Now, you’re a former cop on the street, a former detective. What about this, the high-powered weapons they had?

GRAHAM WEATHERSPOON: There is no need for people to have high-powered weapons. They’re not hunting. Those are assault weapons. They’re used for combat situations. They are not to protect your home, necessarily. You have a handgun, I’m not against people having a handgun legally, but we have to understand in this country, money motivates a lot of things. And unfortunately, money is the God of this country. So as money is generated, politicians respond one way or the other. We have no need for assault rifles. We’re not hunting bear, we’re not hunting elk or anything else. Those days are long gone in this country. It was 250 years ago. That is not the time we’re living in now. There is no need for people to have 7.62 NATO rounds, 223 ammo. That’s high-velocity ammo. You are not simply protecting yourself. You are out there with a high-capacity magazine. You’re out there taking people. You’re a killer. You’re a killer. Yes, you know, people like to go and shoot and target-practice. That is great. But there’s a limit to everything. My pastor says anything to the extreme becomes error. So, it’s best to stay, if we can, near the middle. But these, these weapons? AK-47’s and such? There’s no need for them.