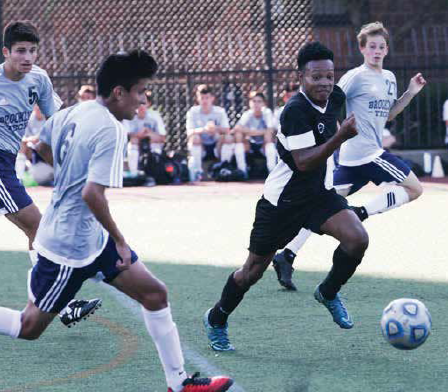 Last week it was about Grand Street Campus’ girls soccer team and their bond with each other that will hopefully lead the team towards a successful season this year. This week, let’s spread the love towards the boys soccer team. Eager to get on the field after their first two games were postponed, this past Saturday the boys were finally able to get on the field and the “extra rest” was beneficiary. The team stormed out the gates and put on a scoring display defeating Brooklyn Tech by a score of 6-1.

Despite their offensive outburst, it was the boys’ ball movement that was quite impressive. The team was able to control possession of the ball and was able to find holes and open lanes. Most important, they were able to contain Brooklyn Tech’s defense who came into the game undefeated at 2-0 and had not allowed a goal for their first two games. Junior player Ossama Diaby seemed very satisfied with the team’s first win of the season saying, “We were understanding each other and everyone kept moving around, just making space for each other. With that, the Wolves were able to score at will.

Not a bad way to start the season at all. However, the team knows it still has to continue to get better every game and keep up the great passing and offense. Perhaps this group of kids are playing with a chip on their shoulder. Last year, in what many feel was a Cinderella-like run towards the Public Schools Athletic League championship game, the Wolves lost a heart-breaking double overtime loss to Beacon. With that said, the first game was a statement game, and the message as well as the goal is quite simple, get back to the championship game and win it all!

Sports Notes: (Football) The Jets were able to bounce back from a tough Opening Day loss to the Bengals by defeating their division rival Buffalo Bills to capture their first win of the season. The team now heads to a rowdy crowd in Kansas City to play the Chiefs. The New York Giants are showing why their defense was worth investing $109 million dollars into. The team defeated the New Orleans Saints to go 2-0 in the season. The team will welcome in a division rival of their own as the 0-2 Washington Redskins come into town. This will also mark round two of the most anticipated receiver/cornerback matchup between the Redskins’ Josh Norman and the Giants’ Odell Beckham, Jr.