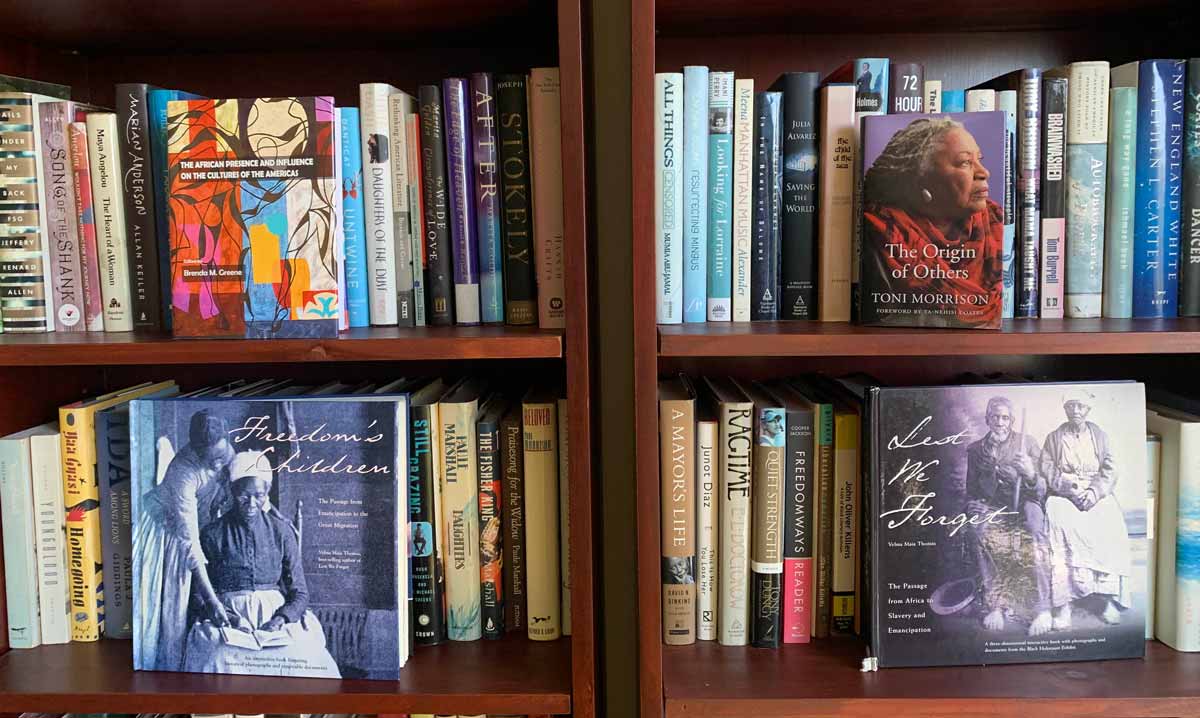 by Dr. Brenda Greene
How Do We Support Black Writers, Publishers, and Presses?
Black readers drive the number of black books published and sold; it is, therefore, incumbent upon Black readers to support Black presses, publishers and writers. The principles of Kwanzaa serve as a guide to how we move forward in supporting Black writers, publishers, and presses. These principles celebrate and affirm African American culture. The principles of Ujima (Collective Work and Responsibility) and Ujamaa (Cooperative Economics) especially apply. Ujima builds on the concept of building and maintaining our community together, making our community’s problems our problems and solving them together. Ujamaa reminds us that when we must build and maintain our own stores, shops, and other businesses together, we all profit together. In this way, we keep our money in the community.

Our legacy is sustained when we invest in the community of Black presses and publishers who are committed to publishing Black writers. We are widening the landscape of books being published and exposing readers to an array of voices from various parts of the African diaspora. We are defying stereotypes and providing counternarratives on the history of Blacks in this country and expanding the conversations on race, popular culture, sexuality, politics, religion, music, education, and art. Paul Coates, the Founder and President of Black Classic Press, has continually spoken of the ways in which Third World Press, Black Classic Press, Just Us Books, and Africa and Red Sea Press support each other. There are a number of independent presses, publishers, and booksellers that are either Black-owned or that carry a significant number of books by Black writers and there are a number of Black-owned book distributors in the country. You can find a listing of them on the website of the African American Literature Book Club. Please visit https://aalbc.com.

Dr. Haki R. Madhubuti is the founder and publisher of Third World Press Foundation (based in Chicago), the oldest independent publisher of critical black thought in the country. Madhubuti is well-known for his classic books on Black males, Black Men, Obsolete, Single, Dangerous?: The Afrikan American Family in Transition (Third World Press, 1991)and Tough Notes: A Healing Call for Creating Exceptional Black Men(Third World Press, 2002). In discussing the Black male situation, Madhubuti notes: “Studies that bring clarity and direction to the black male situation as an integral part of the black family/community are unpopular, not easy to get published and very dangerous.” Madhubuti’s statement represents why it is necessary to support black presses. He launched Third World Press from his basement apartment on the South Side of Chicago in 1967. Third World Press has published a rich tradition of Black writers and authors who include poets and playwrights Dudley Randall, Gwendolyn Brooks, Sonia Sanchez, Tony Medina, and Amiri Baraka, producers and playwrights Woodie King Jr, Ossie Davis, and Ruby Dee, and scholars John Henry Clarke, Asa Hilliard, Derrick Bell, Barbara A. Sizemore, and Herb Boyd among others For more information about the breadth and scope of books published by Third World Press, visit, https://thirdworldpressfoundation.org/

Paul Coates founded Black Classic Press in 1978. The press, based in Baltimore, is devoted to publishing obscure and significant works by and about people of African descent. It specializes in republishing works that are out of print or significant works that have been forgotten. Coates states, “ We began publishing because we wanted to extend the memory of what we believe are important books that have helped in meaningful ways to shape the Black diasporic experience and our understanding of the world.” Dr. John Henry Clarke and Yosef-ben Jochannan were major supporters of Black Classic Press. Walter Mosley made history with Black Classic Press after attending a Black Writers Conference at Medgar Evers College where he listened to a presentation by Coates about printing books on demand; he decided that he wanted to publish with an independent black press. His major publisher was Norton, but Mosley decided that he wanted Black Classic Press to publish his novel, Gone Fishing: An Easy Rawlings Novel. Its first edition was published by Black Classic Press in 1997. For more information about Black Classic Press visit, About Us (blackclassicbooks.com).

Kassahun Checole is president and publisher of the sister presses, Africa World Press, Inc. and the Red Sea Press, Inc. based in Lawrenceville, New Jersey. The presses are dedicated to the publication and distribution of books on the African world and they fulfill a demand for “non-mainstream” academic texts, short stories, and children’s books. Checole was motivated to create the presses after teaching and realizing that there was a dearth of academic titles by Black writers. He started the presses in 1983 and found out that he could publish the books but had no way to distribute them. He then began distributing books and has worked closely with Third World Press and Black Classic Press. began For more information visit www.africaworldpressbooks.com.

Just Us Books, Inc. was founded in 1988 by Wade Hudson and Cheryl Willis Hudson. Wade serves as president and CEO of the company. His career as a writer spans more than three decades and has resulted in more than 25 published books for children and young adults.
Cheryl is publisher and editorial director of Just Us Books. She has authored nearly 30 books for children including AFRO-BETS ABC Book; Bright Eyes, Brown Skin; Hands Can; Just for You! What Do You Know? Snow!; I’m A Big Sister Now; and My Friend Maya Loves to Dance. Cheryl and Wade founded Just Us Books because they could not find books representing Black characters for their young children. Their business has become a well-respected institution in the Black children’s books publishing industry. Visit the Just Us Books at https://justusbooks.com/

RedBone Press, founded in 1997 by Lisa C. Moore publishes work celebrating the cultures of black lesbians and gay men, and work that further promotes understanding between black gays and lesbians and the black mainstream. Lisa C. Moore founded RedBone after white feminist publishers told her that there was ‘no market’ for her anthology of Black lesbian coming-out stories, does your mama know?—which is now in its fourth printing. In 2004, Moore changed RedBone Press’ mission to include quality literature by gay Black men. For more information visit RedBone Press – About the Press
The Black publishers and presses cited above represent a portion of the institutions devoted to publishing black books. You can support the Black independent presses and booksellers cited in this article in the following ways.
Visit the Center for Black literature to obtain a list of recommended books by Black writers at Recommended Reading List – Center for Black Literature
Visit www.aalbc.com to obtain a list of Black booksellers, publishers, and distributors.
Support the Black community by buying black. Go to Black booksellers in-person and online.
Cultivate relationships with independent Black booksellers and with librarians. They will steer you toward the number of books being published by Black writers.
Use social media to post and spread your comments on books by Black writers. Take advantage of platforms such as chats, blogs, Instagram, and Facebook to highlight Black writers.
Post comments on black books sold on websites such as Amazon and Barnes and Noble
Write book reviews for papers and presses and post them online.
We have the power to support our community. The culture of a people is sustained through its writers. Let’s be guided by the principles of Ujamaa and Ujima and use our power to create book culture.
See my review of Not My President. (Third World Press Foundations, 2017) edited by Haki R. Madhubuti and Lasana D. Kazembe. This critical anthology, written when #45 became President, represents a “Call to Action” from scholar activists, historians, journalists, educators, poets, and cultural workers. #45 has declared that he intends to run for President again. The lingering effects of the devastation to our country’s democracy generated during Trump’s reign remain with us. Not My President is essential reading.

From the Harlem Chamber Players, Two Gifts and More to African American Culture and History