Sian Proctor, the First African American Woman to Pilot a Spacecraft: ‘the Reality Is That Solving for Space Solves for Earth’
Advertisement 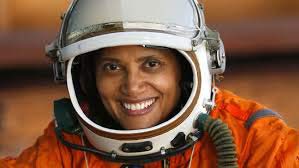 Geoscientist and artist Sian Proctor, 51, made history in September as a member of the first all-civilian orbital spaceflight, SpaceX’s Inspiration4 mission, and as the first African American woman to pilot a spacecraft. She lives in Tempe, Ariz.

How did your interest in space begin?
I was born in Guam, because my dad was working at the NASA tracking station. And I was born 8 1/2 months after Neil Armstrong stepped foot on the moon, so I consider myself to be a moon celebration baby, and space has always been in me, to some extent. As a kid I just wanted to fly. I made lots of model airplanes — World War II airplanes and military jet fighters. I always saw that as the path to space: You became a fighter pilot, and then went on and became the shuttle commander.
Women couldn’t be fighter pilots until the mid-’90s. But nobody ever told me that I couldn’t. In fact, my dad encouraged me. He took me to the model shop to pick out the planes that I wanted to build. And he’s the one who found the Civil Air Patrol for me to become a member when I was a kid. So he was very supportive of me following this dream and this passion and never was like, You know, this might be a hard thing to achieve. It was the complete opposite. But I got glasses when I was a teenager. And you weren’t going to be able to be a military aviator if you wore glasses. So that kind of ended that whole career path for me. And that’s when I really focused on becoming a scientist.

So you probably didn’t think you would end up going to space at 51.
No. It’s been kind of like a roller-coaster ride. You know, a lot of times, in your 40s, 50s and 60s, you think the best part of your life has already passed you by. But that’s not the case. You know: Fabulous 50s. Amazing 60s. I mean, there are things that are achievable and real, if you engage in lifelong learning and make opportunities for yourself and set fun goals.
After I got my PhD, I really wanted to gift myself something special, so I said: I’m going to go get my pilot’s license. Then, at 38, somebody sent me an email saying, NASA’s looking for astronauts, you should apply. I had no idea how they even selected astronauts. And when I looked at the qualifications and was, like, Wow, I actually meet most of these qualifications. I had to kind of mentally talk myself into applying — I struggle with impostor syndrome. But I did. And I got down to being a finalist. It was literally a year-long process to get to that yes/no phone call. And that no was kind of crushing. Because, like, uh, I got so close to my childhood dream.
So I kind of got really sad. But I thought: Okay, I’ll make myself better for the next round. I enrolled into a space studies program. I told myself I was going to get my instrument rating. I was going to get my advanced scuba and all of these things. But I was driving myself crazy. So I just had to stop and say: Whoa, just go back to living my life. And that’s when I learned about becoming an analog astronaut living in moon and Mars simulations. A friend of mine said, “Hey, NASA’s looking for people to go live in this new Mars simulation in Hawaii to investigate food” — and I’m a foodie! So I applied and ended up living in the HI-SEAS habitat for four months and becoming an analog astronaut. It was really fulfilling because I was, like, okay, if I’m not going to go to space, then I’m going to advance human spaceflight here on Earth in my own little way.
Then the last astronaut selection announcement that came out two years ago, just before covid — I was 49, I think, when that came out. A lot of people asked me, “Are you going to apply?” And I was, like, “No, my time has passed for NASA. I’m just too old.” I said, “Maybe one day I’ll be able to go up on commercial space.” But in my mind, that was a decade off. Not realizing it was right around the corner.
You knew a lot about NASA and its training, infrastructure, but going up on the first fully civilian astronaut mission, did you have misgivings?
No. I think I’ve always kind of been “Jump in head first and let’s figure it out along the way.” So for me, it was pure joy, excitement and gratitude from the beginning. Because here I was about to turn 51 and just like, Okay, let’s do this. Because an opportunity like this comes along once in a lifetime. And the fact that it happened, that this dream came true — I had been chasing it my entire life. So I was all-in.

Commercial space flight is a completely different model. What do you see as some of the benefits and the drawbacks?
Well, the biggest drawback is cost. And so, just access. When you think about how do we have as many people experience this as possible because it opens up opportunity, it’s like traveling on a plane, right? You’re going somewhere. There’s some destination. There’s some experience. And that helps to broaden your understanding of our planet and our world and our culture and all of those things. And when I think about access to space and opening it up to more people, I think how all of that knowledge spurs the imagination. And with commercial space, because we’re writing the narrative of human spaceflight now, we have to strive for that JEDI space: just, equitable, diverse and inclusive space. And how do we do that when the cost is so high?

There’s criticism of the billionaire space race when there are so many problems here on Earth that those resources could be put toward.
The reality is that solving for space solves for Earth. That’s the message I don’t think gets portrayed enough. Because everything that we do are real dollars spent here on Earth to advance human spaceflight. There are jobs. And not only that, but the technology and the spinoffs. They all come back here to help us. NASA’s had basically 50 years of spinoff technology.
And as we push for the moon and Mars, it’s all about efficiency and energy, water, food, structures. All of that we have to figure out in order for humans to be able to survive. Well, those are the things that we need to not just survive, but to thrive. To become more energy-efficient. To become more water-efficient. To become more food-efficient. Those are the big problems people are talking about solving. And we can solve them by solving for space.

You’ve spoken about your father as a sort of hidden figure, and here you are now, a public pioneer. What do you think that would mean to him?
Oh my goodness. Oh, he would be so proud and just overjoyed. And I think he would say, “See? I told you you could do anything.” [Laughs.] Because he really instilled that message in me from the beginning — me and my siblings. We’re so lucky to have had amazing parents who just — you know, they grew up half of their lives in segregation. And so they had every reason to be bitter, to some extent, and jaded. But they weren’t. Both my parents believed that the key to advancement and success is education, even though neither of them ever went on to get their college degrees.

You said that the highlight of the mission for you was opening the cupola. Can you describe what that is like for those of us who might not get that opportunity?
It was amazing. When you look up through the cupola at first, when you slide up into it for the first time, you literally openly gasp. Because you can see the entire sphere of the Earth. There’s no way to describe how epic that moment is. You’re just, like: “Wait, wait, ah, ah, oh, okay, ah, wow!” [Laughs.] And then you see the star field down below and the moon peeking out right around the corner, suspended there. It’s magical.

Does seeing the Earth from up there change how you think about the planet and our lives here?
I’ve been a geoscientist my entire career. So climate change, all of that stuff, I already had that in me. But as an artist and a poet, all I kept thinking when I looked at our planet swirling and moving below us was that it was a portrait in motion. It was this amazing portrait that we get to paint. And influence. And how delicate, fragile, and beautiful it is.

I don’t know if you’ve ever seen the movie “What Dreams May Come” with Robin Williams. Great movie, and the scene where he’s in a portrait, and he’s just making the portrait swirl. And I just kept thinking, Wow, I feel like I could just reach my hand out from the cupola and just go like this and make it swirl. And, to some extent, when I think about human influence on our planet, that’s what we’re doing, right? But we’re doing it from the Earth up. And here I am watching the impact of that from space. Because we could see the fires burning. So thinking how we can’t mess this up. It’s too beautiful to mess up.

When you see the Earth from that perspective, it does change you. For some, it gives an appreciation for all that we have down there and this sense of stewardship. For others, it gives that urgency to keep going, to keep advancing human spaceflight out among the stars. But the reality is, it fundamentally changes you in some way. And that’s a good thing.

KK Ottesen is a regular contributor to the magazine. Follow her on Twitter: @kkOttesen. This interview has been edited and condensed.

In OUR TIME…Dr. John Henrik Clarke