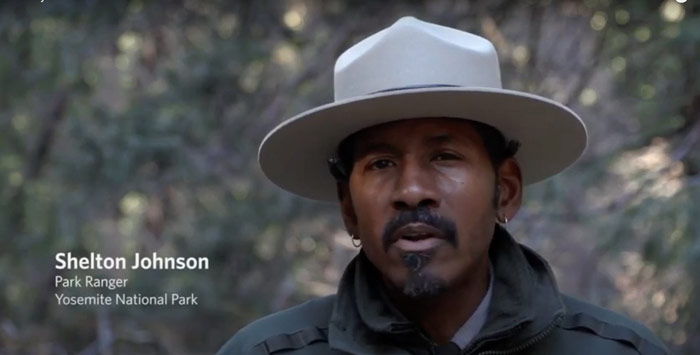 In Gloryland the ranger displays both his interpretive and literary skills, painting images and carrying across the racism of the day with deft use of the words contained in the English language in a rolling narrative that stabs at the racial bigotry of the past, such as in an early passage in which a young Elijah gets accosted by a white Southerner while he and his mother are walking through Spartanburg.

What I can’t forget is Mama talking to me when we got home. When we got inside where there was shelter, her holding my face in her rough warm hands like she was praying, I felt how warm it was and safe to be there in her hands. Nothing could hurt me in that shelter that was hands and love, and she said, “Elijah, you forget that man, he nothin to you or to me or your daddy. But you ain’t nothing, cause I didn’t work a day and a half bringin nothin into my life. You could never be nothin, you could never be anyone’s nigger. You my boy Elijah, you my son, and my son ain’t a nigger, and your daddy ain’t a nigger, and I ain’t a nigger, and it don’t matter how much it get said don’t make it true.

“That man’s cussin somethin inside him, somethin he hates inside him, but not you cause he don’t even know who you are, Elijah. Cause what I’m holding in my hands is somethin good and kind, and I know you’ll never be a nigger unless you forget who you are!”

That’s what Mama said, so I never try to be something I ain’t, and I ain’t ever been a nigger. But I’m Seminole and I’m colored, just like sundown I’m colored, like dirt that’s warm and black and red too, like the sun’s been shining so long the dirt remembers all that light and holds onto it. It takes a lot of sunsets to turn the ground red down deep, but I guess there’s been plenty of sunsets since the beginning, and there weren’t no niggers then. Niggers came later.

But knowing I wasn’t a nigger made me sick, cause white folks treated me like something I wasn’t. When I got older I corrected them, I told them who I was. I said, “Elijah Yancy’s my name, what’s your name?” I didn’t really care if they told me. What mattered was that they knew who I was. I could’ve been saying I was God, I said it with such pride. I believed my mama when she said Elijah Yancy is God’s child, her child, a boy who’s got a mother and a father, people who love him, and love ain’t nothing. It matters like water matters, or the sun.

Everyone’s got a favorite place, a place that’s who you are, and you can move through it, breathe the air, walk the ground, and be home in a way that you’re not anyplace else. I found a place like that in Yosemite, or it found me.

It was a high meadow so close to the sky that the blue of heaven began to stain the plants below. You could see it in the high grass and flowers with the blue of the sky in their petals. Sky was so close there, maybe it was leaching its color, so after a rain the plant just pulls it from the air and gets drunk on it, waving back and forth in the breeze, giddy with indigo.

You’d be giddy too if you could walk there with snowy mountains rising around you, holding the trees in place. It was high and rocky and green and cold. Even in the sun it seemed cold and warm at the same time. Some places can hold oppose things, like putting something to your lips that’s hot and cold and sweet and bitter, that’s what the meadow was like. It was cold as if winter was walking out but warm as if spring was strolling in, and when they passed each other, they stopped and turned round, then spoke in the heart of it, comparing notes. It was a long conversation. You could hear their talk in the grass and in the trees and inside yourself.

Shelton Johnson acknowledges that he wrote the book with blacks in mind, but he also believes that anyone can find the spirituality that nature offers.

“I think we’re in danger of being the first species on the planet to lose all spiritual connection with the earth. Deer do not have to be reintroduced into wilderness to give them a sense of being grounded again. They’re deer, they don’t know anything else,” he tells me. “But with the fact that now we have over 90 percent of Americans who classify themselves as being urban, whereas in 1900, the time of the Buffalo Soldier history, about 90 percent of African-Americans would have classified themselves — not just African-Americans, but Americans in general — would have classified themselves as being rural. It’s such a short time ago. 100 years ago we were mostly rural. But now we’re mostly urban, and African-Americans are more urban than urban, they’re the least likely of a cultural group to be users of wilderness. And this is not me coming up with these statistics, these are verifiable stats that you can find among the social scientists.