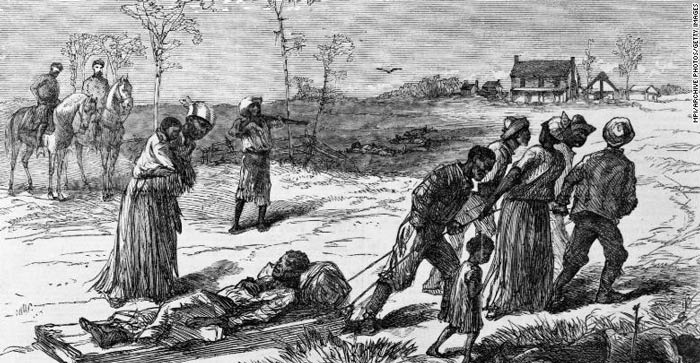 The Republican Party is determined to ignore history and the moral arc of the universe, by using the 2022 and 2024 elections to return the United States to a nation ruled by White Christian men and placing Donald Trump as its leader. And when you combine their voter suppression work with their redistricting and gerrymandering efforts, they could well succeed.

We’ve seen who they are at the capitol on January 6th.  We watch them on television speaking with no regard for the truth, we see them packing the federal judiciary with lifetime appointments to judicial ideologues.

And, instead of rampaging through black areas in white sheet to suppress the vote, they’ve introduced over 360 legislative proposals to do the same and are passing them, one by one.

The CNN analysis below, recounts the long and bloody history of suppression of Black voting.

The Republicans may want to ignore history, we cannot.  David Mark Greaves

Analysis by Brandon Tensley, CNN
Washington (CNN)This past March, John Kavanagh, a Republican member of the Arizona House of Representatives, insisted that his antidemocratic position on voting rights was about election security.
“Democrats value as many people as possible voting, and they’re willing to risk fraud,” the lawmaker said, rehashing former President Donald Trump’s baseless tub-thumping about mass voter fraud in the November election. “Republicans are more concerned about fraud, so we don’t mind putting security measures in that won’t let everybody vote — but everybody shouldn’t be voting.”
Then Kavanagh went even further, suggesting that not all eligible voters are of the same quality.
“Not everybody wants to vote, and if somebody is uninterested in voting, that probably means that they’re totally uninformed on the issues,” he added. “Quantity is important, but we have to look at the quality of votes, as well.”

Everybody shouldn’t be voting. The quality of votes. Kavanagh’s support for voting restrictions is part of a much, much broader Republican effort to block access to the ballot box in the wake of President Joe Biden’s victory over Trump — but it’s also consistent with a long US history of political machinations intended to ensure power for White men and keep it at a distance for everyone else, most especially Black Americans.