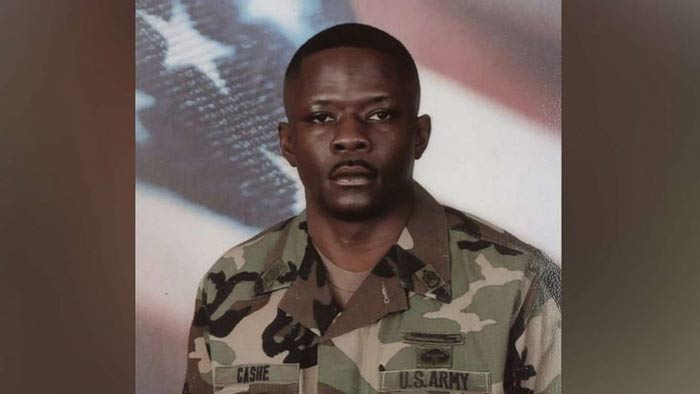 President Joe Biden on Thursday awarded the Medal of Honor — the nation’s highest military award for valor — to three U.S. soldiers for risking their lives “above and beyond the call of duty” during the wars in Afghanistan and Iraq, including Sgt. 1st Class Alwyn Cashe, the first Black service member to be so honored since the 9/11 attacks.
“Today, we honor three outstanding soldiers, whose actions embody the highest ideals of selfless service,” Biden said at the ceremony. “We also remember the high price our military members and their families are willing to pay on behalf of our nation.”

“We remember the strength and the sacrifices of these military families, caregivers and survivors,” he added. “And we remember and renew our sacred obligation to those who served this nation in uniform.
Cashe suffered fatal injuries while serving in Iraq on Oct. 17, 2005, after rescuing fellow soldiers from a burning vehicle during Operation Iraqi Freedom in the Salah Ad Din Province, according to the White House.
Cashe’s sister Kasinal Cashe-White recalled her brother as “very rambunctious,” a “daredevil” and “a good kid all around.”

She told ABC News in an interview on Wednesday that receiving the Medal of Honor “means everything” to the family.
“We lost our brother. He can’t be replaced. But this award means that his name his legacy will go down in history,” she said.

Cashe grew up in Oviedo, Florida, and enlisted in the U.S. Army in July 1989 after graduating from Oviedo High School. He was deployed in the 1991 Gulf War and served in Korea and Germany before being deployed to Iraq in 2005 while serving as a platoon sergeant in the 3rd Brigade, 3rd Infantry Division at Fort Benning, Georgia.
Asked how she feels about Cashe being the first Black soldier to receive the highest award for valor for service during the war on terror, Cashe-White said her brother “earned” the honor through his actions.

Cashe was initially awarded the Silver Star, the Army’s third-highest honor for valor in combat, but his battalion commander, Lt. Gen. Gary Brito, and other officers advocated for years that Cashe deserved to be upgraded for the Medal of Honor. Cashe-White said that Brito and the 3rd Infantry Division had “been with us every step of the way.”
When asked whether she thought race was a factor at all when it came to the delay, she said, “I don’t think so. I think it was just a matter of timing,” adding, “Did I want it in 2005? Yes. Would I have been happy in 2007? Yes. Would I have been ecstatic if it happened before now? Yes. But I am just over exhilarated that it’s happening now.”

Biden also posthumously honored Sgt. 1st Class Christopher Celiz, an Army Ranger who died at 32 years old during a 2018 firefight in Afghanistan, as well as Master Sgt. Earl Plumlee, a Special Forces soldier who fought off Taliban suicide bombers in Afghanistan in 2013 and is set to attend the ceremony, according to the White House.

Each of the service members demonstrated courage and gallantry by putting their own lives on the lines to aid their comrades and the actions that led them to receive the honor, a White House press release said.

When the vehicle that Cashe was commanding became engulfed in flames during an attack, his uniform caught fire and he sustained severe burns while extinguishing the flames and rescuing his fellow soldiers, according to the White House. Even after suffering injuries, he repeatedly approached the vehicle and helped four soldiers escape while being targeted by live fire.

“He went back into the inferno for a third time and got everyone out of that inferno,” Biden said at Thursday’s ceremony. “That was his code; his love for his Third Infantry Division ran deep. No soldier was going to be left behind on his watch.”

Celiz, who died of wounds he received in combat on July 12, 2018, in Afghanistan’s Paktia Province, was attacked while leading an operation to disrupt attacks against the U.S. and allied forces and saved six lives through his actions, the White House said.

His wife, Katie Celiz, told ABC News in an interview Wednesday that her husband was a “family man” who had an “amazing relationship” with their daughter.
“Chris believed in putting his men and his mission first,” she said. “Chris believed that we should always do good, whether it was the easy thing to do or not.”

During the operation he “voluntarily exposed himself to intense enemy machine gun and small arms fire” to help the U.S. and its allies reach safety and to administer aid to a wounded soldier, the White House said.
After he was hit himself, he signaled for the aircraft to depart without him.

“His selfless actions saved the life of the evacuated partnered force member and almost certainly prevented further casualties among other members of his team and the aircrew,” the White House said. At Thursday’s ceremony, Biden said that Celiz was “courage made flesh.”

“Today we add his name to the elite vanguard of American warriors, who generation after generation have strengthened and inspired our nation with their unwavering bravery and service,” he added. “His legacy lives on, in the lives he saved, the teammates he mentored and the memories he made with his beloved wife, Katie, and especially in their precious daughter, Shannon.”

Plumlee, who spoke with ABC News on Wednesday, was also being honored for his heroic actions while serving in Afghanistan.
While responding to an explosion on the U.S. base, he fought off 10 Taliban suicide bombers dressed in Afghan National Army uniforms and came under fire several times, according to the White House. He placed himself in harm’s way by leaving cover to protect his base and helped render first aid to a wounded soldier, carrying him to safety.
“Without cover and with complete disregard for his own safety, he advanced on the superior enemy force engaging multiple insurgents with only his pistol,” the White House said.

At Thursday’s ceremony, Biden said he was “grateful” for Plumlee’s continued service and dedication to the nation.
“This recognition has been too long and coming delayed for you and your family as well,” he added. “And no one, no one will ever forget how you sprang into action when the enemy attacked our base.”
ABC News’ Luis Martinez contributed to this report.

The Loss of Tutu is Immeasurable