The Loss of Tutu is Immeasurable
Advertisement 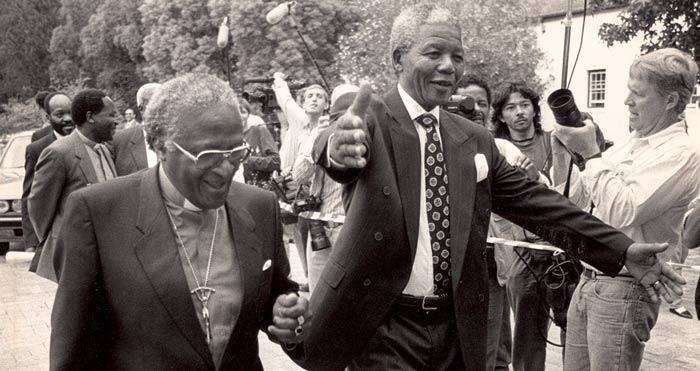 The anti-apartheid icon passed away at the age of 90.

Sello Hatang says the loss of Tutu is immeasurable as he was an extraordinary thinker and leader.
“The Arch meant everything to me, I first met him during the work of the Truth and Reconciliation Commission, and was privileged to work with him on a number of projects over the years. He was a friend to Madiba and to the foundation.”

Hatang says there was a long history between former president Nelson Mandela and Tutu.
“Nelson Mandela and the Archbishop Emeritus first met at a debating competition in the early 1950s. It would be four decades later before they met again, on the day that Mandela was released from prison.
“His first night as a free man was spent at the home of the Tutus in Bishopscourt, Cape Town. On that occasion before everyone retired for the night, Tutu offered a prayer of thanksgiving and led a singing of Reverend Tiyo Soga’s famous hymn in isiXhosa, ‘Lizalis’idinga lakho’ – ‘Let your will be done’.”

Hatang says the legacies both icons leave behind are guidelines on working for a better world.
“We owe it both to Madiba and to the Arch to continue working for the country and the world of their dreams. Their intersecting legacies are powerful resources for social justice work.”

“When Nelson Mandela passed away in 2013, Archbishop Emeritus Tutu said ‘This is a man who cared.’ As the Foundation mourns today the passing of our beloved Arch, we in turn can say precisely the same of him. May he rest in peace.”

“I am not interested in picking up crumbs of compassion thrown from the table of someone who considers himself my master. I want the full menu of rights.”

“What is black empowerment when it seems to benefit not the vast majority but an elite that tends to be recycled?”

“Europe became rich because it exploited Africa; and the Africans know that.”

“In its history, Europe has committed so many massacres and horrors that it should bow its own head in shame.“

“I mean in the South African case, many of those who were part of death squads would have been respectable members of their white community, people who went to church on Sunday, every Sunday.”

What is black empowerment when it seems to benefit not the vast majority but an elite that tends to be recycled?

All the United States, it is a society that is split like to the bottom, that had very poor people in the country that is one of the wealthiest countries.

I am a leader by default, only because nature does not allow a vacuum.

In its history, Europe has committed so many massacres and horrors that it should bow its own head in shame.

“Archbishop Desmond Tutu was the global Ambassador of humanity and human rights who helped usher in an era that united the world in a common cause: ending apartheid in South Africa.

What a great loss for the world and mankind. The 1984 Nobel Peace Prize winner was the Commencement Speaker at my graduation from Oberlin College and a leader and true inspiration in the Global Racial Justice movement. I have powerful and indelible memories of Archbishop Tutu’s passion for justice as commencement speaker.

This would be the first of several encounters with him over the years. He was truly an inspiring leader. He is leaving behind a legacy that will not only shape generations to come, but continue to be transformative, as we advance the movement for a more just and equitable world. May he rest in peace.”

“The passing of Archbishop Desmond M. Tutu is a heartbreaking loss for our global community.
“A champion of civil rights whose voice brought down apartheid in South Africa and advanced the fight for human and economic justice throughout the world, Archbishop Tutu’s advocacy resonated across generations, cultures, and communities. His lessons of love, justice, and empowerment have personally inspired me throughout my journey as a public servant.

“One quote of his in particular always stays with me: ‘There comes a point where we need to stop just pulling people out of the river. We need to go upstream and find out why they’re falling in.’