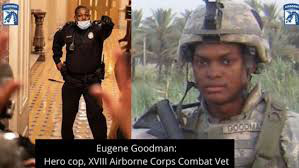 Black History month 2021 should be a celebration of how African Americans has saved this country yet again. What the insurrection in the Capitol has shown, along with their enablers in congress and the ascent of the racist, antisemitic, deranged conspirator Congresswoman Marjorie Taylor Greene in the Republican party is how close we are to becoming a true authoritarian state.
These forces were thwarted by Congressman Jim Clyburn, who saved America with his emotional endorsement of Joseph Biden in the South Carolina primary, setting him on the path to the presidency. They were thwarted again by the thousands of unnamed volunteers across the country who brought out the black vote and gave Biden the votes he needed to win the national election. And Stacy Abrams and election activists saved America once more when they got out the vote to send Jon Ossoff and Raphael Warnock to the Senate. Without those two senate seats, Biden would have been obstructed at every turn and the suffering of the nation would have only deepened. And then there was Eugene Goodman, the Capitol police officer who led the mob away from the unguarded doors to the senate chamber before the legislators had fled, preventing a horror we can only imagine.
After the 400 years of slavery, the thousands of lynchings, Reconstruction, Jim Crow, and the systemic racism throughout society, the forces of darkness are coming for us again and the mob at the Capitol was only a point on the spectrum of the mentality Black and Brown folks have been dealing with for centuries. And now the country has an in-your-face proof there is no depths of depravity that White so-called Christians, White supremacists, White nationalists or whatever you want to call them, will not descend to maintain power.
They have tried voter suppression and when that didn’t work, they tried to delete our votes through the courts and legislatures. It was only when all those effort failed that they decided to storm the Capitol and enforce their rule over the country. They are united in one thing. Their belief that their color and religion are superior to all others and should define the nation.
What is needed, as it has always been needed, is a lifting up of the White abolitionists.
The Baby Boomers had not thought Black History Month would be like this in 2021. That we’d be still fighting for the right to vote.
When the world leaders get their briefing books, like our president gets his, what do you think they say about America, when they see not only the riot and the support in congress, but the on-the-ground vote suppression work and guerrilla insurgency of the Republican party? They see a militant, destructive minority, driven with a religious fervor, to take control of the country. They see the US better than we see ourselves. They recognize the danger and wonder what will happen in 2022 and 2024, now that we have shown that anything is possible in today’s United States.
And yet the glass is half full. There are signs that most people are genuinely afraid of where the country is headed. And like yesterday’s abolitionists, they are stepping up, getting to the polls and fighting the good fight, which brings up another person the country should be thankful for, Joy Chatel. It was Joy’s unflagging diligence that led to the historical landmarking of the Underground Railroad station at 227 Duffield Street, and the recognition of Harriet and Thomas Truesdell, the Abolitionists who opened their home, to much personal risk, for the Africans fleeing to the north.
We need that abolitionist fervor and courage today, because the slaveholder mentality is still with us and we must band together if we are to avoid a return to the past.