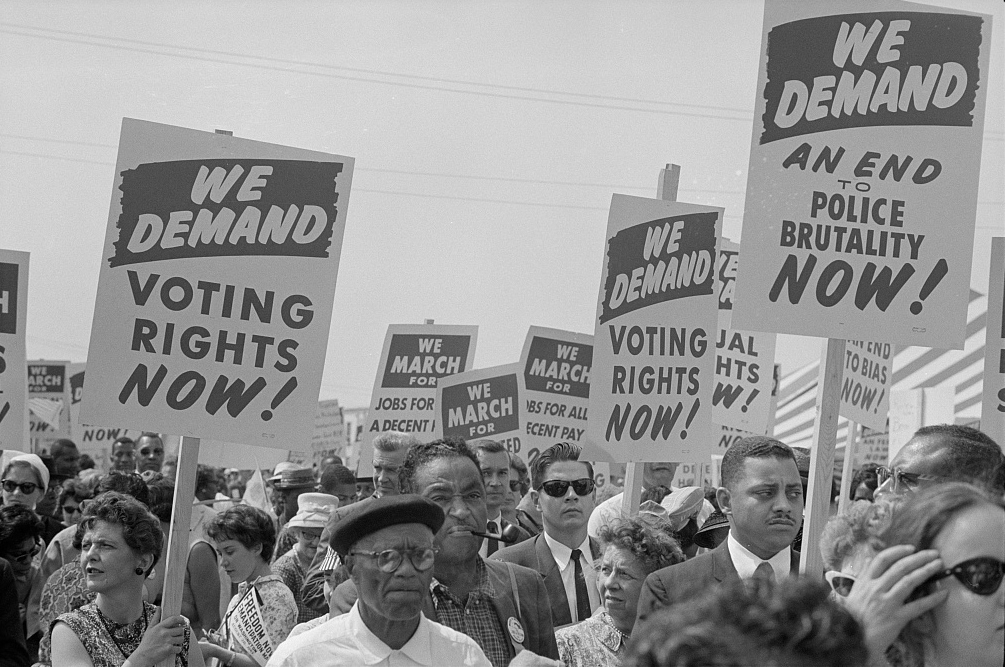 The following talk with Prof. Gloria J.Browne-Marshall, professor, Constitutional Law at John Jay College, and publisher David Mark Greaves, is the third in an Our Time Press series of ongoing interviews and conversations on the state of our times. It is inspired in part by a book Prof. Browne-Marshall is writing entitled: My Sankofa Year. The interview took place January 11, 2020.

OTP: Janie Green, mother law, the well-known late community activist,used to speak about the power of NYCHA residents. She would tell me, “Some of these public housing developments have more people in them than many U.S. towns, and along with that comes great voting power.”

GBM: Yes. That’s what the March on Washington and H. Phillip Randolph’s campaigns were about. It was necessary for us to work together across class lines. There aren’t enough black middle-class people to make this country move, one iota. There’s got to be a combination of the Black middle class and the working class for us to make progress.

America’s advancement as a class-based society is one where not only did the Black middle class jump in with both feet but they also turned a snobbish eye to their brother, cousin, sister who had not made that progress or chose to stay in the black community. I like being part of a Black community. I’m not one of these people who wants to be the only Black person out in a suburb but if that’s somebody’s choice, that’s their choice.

I’m saying, when something happens to that black person out in an all-white community, the first thing they want to do is call Black people to come and help them. That’s fine. You live where you live. What we fought for was choice, so I’m a firm believer in free will, which is something we didn’t have the majority of time we’ve lived in this country. It’s something I believe in: free will and choice. On the same note, though, this animosity against other people because they have not attained certain material gain, has undermined the relationship, the trust, that we need in one another and the ability to bring the troops together. So, this idea we have to bring the troops.

The animosity goes both ways because you have a lot of working class who have a great deal of animosity against the middle class. The lack of trust between the two is not going to help us at all. If people actually found out that we have this real schism they’re really going to figure out ways to make it wider. So, I don’t think it’s well known at this point, but the Russians are trying to know everything about us.

OTP: You know that sounds like an extension of the house and the field negro From Slavery time. So that’s something that has been I don’t know what to say engrained or is become part of our thinking is that so?
GBM: I don’t think its ingrained. I don’t think it was ingrained back then. I think there’s so much that has been put in front of us, and we’ve been forced to eat, as racism. The diabolical — and I mean diabolical from the standpoint that peo0ple thought things through in ways in which they could divide our community — make us hate ourselves.

There’s so much that has been created for the end objective to break us down, break our spirit, break our bodies and make us hate ourselves and hate each other. The fact that we are still not at that point is a miracle and that’s because inside of us, we want to work together.
We want to protect each other’s interests, we want to progress as a team and this is why it’s been, I’m sure, puzzling to a lot of people that we still have such great pride in ourselves as African Americans and then our African American or Black community , is one in which we come together to fight oppression but we also come together because we enjoy being with each other which is something the outside world will never understand.

I’m very proud to be an African American and they will probably never understand that, and I don’t care about their understanding of it. But they know enough about (that pride) to know that they must exploit our weaknesses, and classism is one of those weaknesses that we cannot afford.
Gloria J. Browne Marshall is a Professor of Constitutional Law at John Jay College of Criminal Justice (CUNY). She teaches classes in Constitutional Law, Race and the Law, Evidence, and Gender and Justice. She taught in the Africana Studies Program at Vassar College prior to John Jay. As a civil rights attorney, she has litigated cases for Southern Poverty Law Center in Alabama, Community Legal Services in Philadelphia, and the NAACP Legal Defense Fund, Inc. She addresses audiences nationally and internationally. Gloria J. Browne Marshall-Marshall, a broadcaster for WBAI-FM, has spoken on issues of law and justice in Ghana, Rwanda, England, Canada, South Africa and before the United Nations in Geneva.

A prolific writer, she is the author of “The Voting Rights War: The NAACP and the Ongoing Struggle for Justice” and “Race, Law and American Society: 1607 to Present.” Her book “She Took Justice” will be out later this year.

David Mark Greaves, CEO, DBG Media, is the award-winning “View from Here” columnist and chief interviewer for the Brooklyn-based Our Time Press weekly, which he co-founded with his wife Bernice Elizabeth Green in 1996. Also, Vice President of William Greaves Productions, Mr. Greaves is an author and former filmmaker. He is a graduate of Syracuse University and received a Masters in Fine Arts from Columbia University.

(Note to readers: This Conversation was edited by Ms. Green from a transcription.)