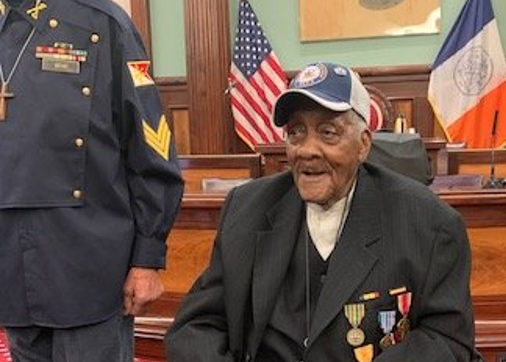 By Chaya Gurkov
It’s not every day that one gets to see a 100-year-old man celebrating such a momentous birthday but last Thursday the city council witnessed just that when Majority Leader Laurie Cumbo (Fort Greene, Clinton Hill, Prospect Heights, Crown Heights, Downtown Brooklyn) joined with council colleagues in celebrating the birthday of Reverend James E. Blakely, the oldest known African-American Pearl Harbor Veteran on record.

Though confined to a wheelchair, Rev. Blakely’s humorous disposition filled the room with laughter, his graciousness highlighting a vibrancy for life that left people awe-inspired. Enlisting in the United States Navy in September of 1939, he served aboard the USS during the Pearl Harbor attacks, sharing his vivid memories of the events that took place that fateful day.

“Thank the good Lord I didn’t get wounded,” he recalled, “because I stood right on the deck when a bomb fell from the sky, right next to where I was standing. It didn’t go off, and the crew threw it overboard, right into the water.”

Later during World War II, Rev. Blakely served aboard the USS President Jackson in major combat operations in the Pacific Theater, including the battles of Guadalcanal, Iwo Jima, the Marshall Islands and Guam, helping to transport troops to the battlefield and evacuate the dead and wounded.

Also being honored at the event was Clyburn Sowell, a fellow veteran who served aboard the USS Bullwar. Sowell recently celebrated his 95th birthday.
Beyond the palpable positivity emanating from the room rose a slightly darker note when Rev. Blakely admitted that little has changed in America from what he remembered it to be back in segregated Arkansas, where he was born. “It was one of the meanest states, and it hasn’t really changed,” he said.

But the 70-year-old Herbert Sweat, native to Brooklyn and a good family friend of the Blakely’s, brought a different side to that argument when addressing the crowd, “The reason why many people of color served in the army of the United States is for our honor, our dignity, and for our alliance with this country that we so diligently embody.”

Rev. Blakely was honorably discharged from the United States Army in 1945 where he moved to Brooklyn and started a new life working as a longshoreman on the waterfront and then as a porter at New York University.

After experiencing some years of hardships, Rev. Blakely settled on Bergen Street in Bedford- Stuyvesant/ Crown Heights Brooklyn with his wife of 12 years, Bonnita Blakely. “James always expressed to me that he wanted the veterans to be treated right. That was something he always told me,” Bonita told Kings County Politics when asked about what Rev. Blakely opinion on the current treatment of veterans and their rough transition back into mainstream society.
According to a National Coalition for Homeless Veterans study, about 20% of the male homeless population are veterans.

Cumbo, coming upon the question of what we can do to better serve the men who put their lives on the line for America, told Kings County Politics that, “I think when we do holidays or celebratory months like women’s history month or veterans day, really what they should inspire is year-round activity and recognition. It’s important that we recognize our veterans year-round.”