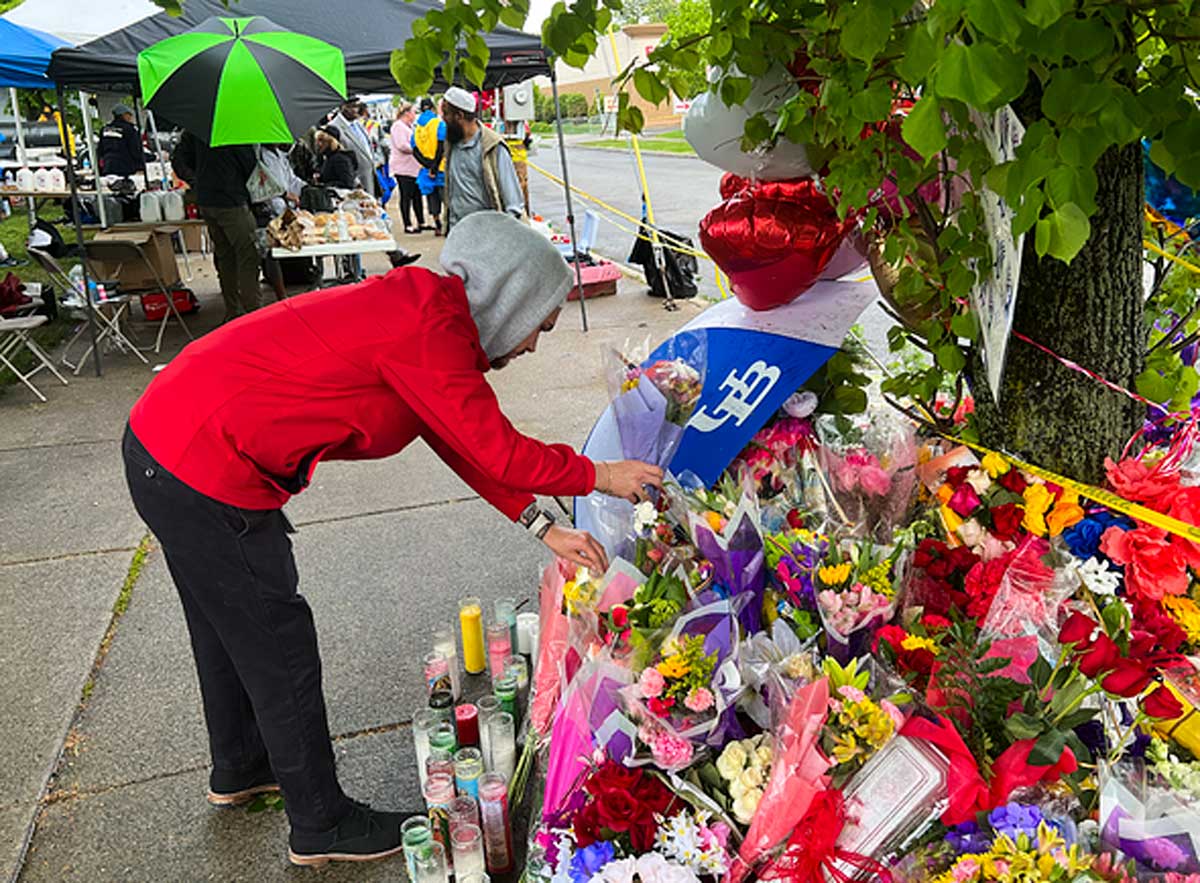 May 16, 2022, Buffalo, New York: A man lays a bouquet to mourn for the victims of a mass shooting in Buffalo on Saturday. (Credit Image: © Zhang Jie/Xinhua via ZUMA Press)

“I am horrified to see another devastating act of hateful gun violence in America. Our thoughts and prayers are with the families of the thirteen innocent people who lost their lives due to this tragic hate crime. This story is not new; we’ve seen this play out repeatedly. But we are very clear, thoughts and prayers are not enough. There must be accountability for hate, there must be criminal justice reform, and there must be common-sense gun reform. That is why Democrats in the House passed sweeping legislation to address these glaring issues. The Senate must abolish the Jim Crow era filibuster and pass the legislation that will save the lives of innocent Americans. We owe it to the victims, their families, and all Americans to take action.”
Rep. Joyce Beatty (D-Ohio),
Chair, Congressional Black Caucus

“Black Americans are the leading targets for hate crimes in our country, but we also continue to witness increases in anti-Semitic attacks, as well as violence against the Latino, Asian, Muslim, and LGBTQ+ communities. The frequency and intensity of this violence has been super charged in part by social media, which provides a virtually unchecked platform for hate speech and the encouragement of violent actions. And, as we have seen by the number of attacks that have been live-streamed, a built-in audience for hate. It is imperative that elected officials take concrete steps to reduce online hate speech – including essential government regulation – and put forward serious legislation to put an end to gun violence in America.”
Janai S. Nelson, President and Director-Counsel of the Legal Defense Fund

“As white supremacist hatred has raged out of control over the last few years, social media and gun merchants exploit it for profits, while atrocities and trauma continue to be inflicted on communities of color. We call on state and federal law enforcement to pursue hate crimes charges against the shooter and pursue policies to prevent such tragedies.  Until we as a nation begin to confront the twin threats of domestic extremism and reckless gun policies as the grave crises they are, innocent people will continue to pay the deadly price.”
Marc H. Morial, President and CEO, National Urban League and Thomas Beauford, Jr., President and CEO, Buffalo Urban League

“America is witnessing an unprecedented depth of resentment, hatred, and hostility. It grows out of racism. This feeling that something is being taken away from people who consider themselves to be true Americans. So, they have used whatever methods they can use up to and including the attack on January 6 in Washington. Violence, hatred, use of the media, and the elective system are all tied in together in one package of hatred that they have taken something away from us and we’ve got to get it back. Out of these minds comes the violence we are witnessing. Unprecedented.”

Reverend Herbert Daughtry, National Presiding Minister Emeritus, The House of the Lord Churches“This is absolutely devastating. Our hearts are with the community and all that have been impacted by this terrible tragedy. Hate and racism have no place in America. We must address domestic terrorism. Think of this. Had this individual been from a Middle Eastern country the reaction would be completely different. It would be a matter of national security. In the NAACP we have long said that white supremacist behavior and domestic terrorism are a matter of national security. And we must treat it as such.”
Derrick Johnson, President and CEO, NAACP