Again the Pain.
When Will it End?
Advertisement 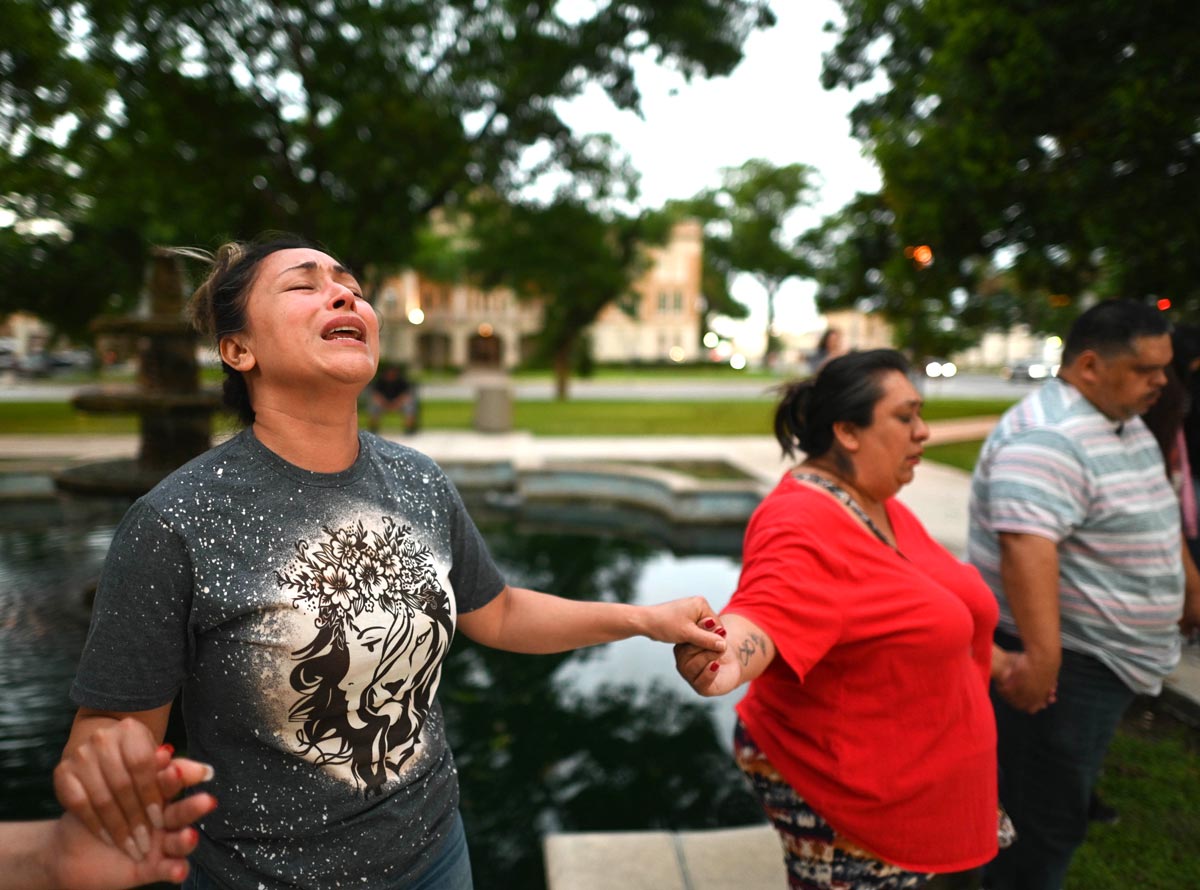 May 24, 2022, Uvalde, Texas, KLADYS CASTELLON prays during a vigil for the, 22 dead: 19 children (7 thru 10 years in 2nd, 3rd and 4th graders) and two teachers as well as teen high school student shooter, that died at a mass shooting at Robb Elementary School in Uvalde on Tuesday. (Credit Image: © Billy Calzada/San Antonio Express-News via ZUMA Press Wire)

“What are We Doing?”
Senator Asks Question for All Americans

After another horrific shooting, this time killing 19 students and two teachers in an elementary school in Uvalde, Texas, Sen. Chris Murphy took to the floor of the U. S Senate to express his deep anger and frustration.
The text of the senator’s remarks:
Mr. President, 14 kids dead [19 later confirmed] in an elementary school in Texas right now. What are we doing? What are we doing? Just days after a shooter walked into a grocery story to gun down African American patrons, we have another Sandy Hook on our hands. What are we doing? There were more mass shootings than days in the year. Our kids are living in fear every single time they set foot in the classroom because they think they’re going to be next. What are we doing? Why do you spend all this time running for the United States Senate, why do you go through all the hassle of getting this job, of putting yourself in a position of authority, if your answer as the slaughter increases, as our kids run for their lives — we do nothing?
What are we doing, why are you here, if not to solve a problem as existential as this. This isn’t inevitable. These kids weren’t unlucky. This only happens in this country and nowhere else, nowhere else do little kids go to school thinking that they might be shot that day. Nowhere else do parents have to talk to their kids as I have had to do about why they got locked into a bathroom and told to be quiet for five minutes just in case a bad man entered that building. Nowhere else does that happen except here in the United States of America. It is a choice. It is our choice to let it continue. What are we doing?

In Sandy Hook Elementary School, after those kids came back into those classrooms, they had to adopt a practice in which there would be a safe word that the kids would say. If they started to get thoughts in their brain about what they saw that day, if they started to get nightmares during the day reliving stepping over their classmates’ bodies as they tried to flee the school. In one classroom that word was ‘monkey.’ Over and over and over through the day, kids would stand up and yell ‘monkey’ and a teacher or a paraprofessional would have to go to that kid, take them out of the classroom, talk to them about what they had seen, work them through their issues. Sandy Hook will never be the same. This community in Texas will never be the same. Why? Why are we here if not to try to make sure that fewer schools and fewer communities go through what Sandy Hook has gone through, what Uvalde is going through. Our heart is breaking for these families. Every ounce of love and thoughts and prayers we can send we are sending, but I’m here on this floor to beg, to literally get down on my hands and knees and beg, beg my colleagues to find a path forward here, to work with us to find a way to pass laws that make this less likely.

I understand my Republican colleagues will not agree to everything that I may support, but there is a common denominator that we can find. There is a place where we can achieve agreement that may not guarantee that American never ever again sees a mass shooting, that may not overnight cut in half the number of murders that happen in America. It will not solve the problem of American violence by itself, but by doing something, we at least stop sending this quiet message of endorsement to these killers whose brains are breaking, who see the highest levels of government doing nothing shooting after shooting. What are we doing? Why are we here? What are we doing? I yield the floor.”