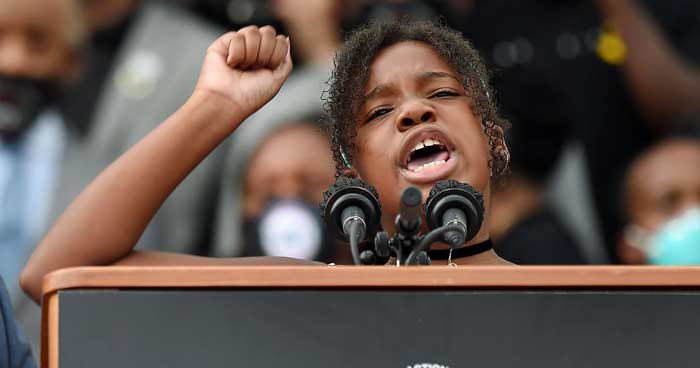 “The Commitment March: Get Your Knee Off Our Necks,” organized by The Rev. Al Sharpton (in photo, inset, left), Founder & President, the National Action Network, (NAN), and attended by thousands on Friday, August 28, 2020, commemorated the 57th anniversary of Dr. Martin Luther King Jr.’s “I Have A Dream” speech. Among the guest speakers were Rev. King’s granddaughter Yolanda Renee King, 12 (above).

Miss King’s Vision: “We Will be the Generation That Dismantles Racism.”

She said that her grandfather “predicted this very moment” – when the struggle would move into a new phase. “The first phase was the Civil Rights (Movement), and the new phase is genuine equality,” she said.

“My generation has already taken to the streets peacefully, and with masks and socially distanced, to protest racism, and I want to ask the young people here to join me in pledging that we have only just begun to fight,” she said. “And that we will be the generation that moves from ‘me’ to ‘we’.”

“I didn’t know what would hit us in 2020 – a pandemic that shut our schools and put our young lives on hold, more killings of unarmed Black people by police, attacks on our right to vote, the worst economic crisis since the Great Depression that we learned about in school, and more extreme weather than ever before,” she said. But, she noted, “great challenges produce great leaders.”

And Miss King is ready to lead.

OUR TIME PRESS Q&A with …MICHAEL A. HARDY, ESQ.