OUR TIME PRESS Q&A with …MICHAEL A. HARDY, ESQ.
Advertisement 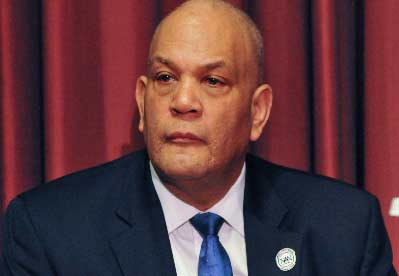 Our Time Press has followed the work of the National Action Network, founded by The Rev. Al Sharpton, for more than 20 years, and we have observed the contributions of NAN’s co-founder and legal counsellor Attorney Michael A. Hardy, Esq. for just as long. What specifically impresses us is NAN’s consistent community advocacy, strategic creativity and compassion for the people on the ground. The organization has raised emergency preparedness to an art form. We were impressed with its decision in response to COVID19: to convert satellite offices into community kitchens to deliver meals to those who needed them. We are energized by its commitment to get voters to the polls, and its tireless work around Voter Registration and encouraging the community to join in poll watching work and the 2020 national elections. Then, of course, there is the tireless work for our families, the Bells, the Carrs, the Hawkins, the Floyds, The Martin-Fultons and so many others. We requested a talk with Mr. Hardy, the day after Rev. Sharpton’s successful “Commitment March,” August 28, 2020, in Washington, DC. Mr. Hardy spoke to us the following morning.

Part One of Two

OUR TIME PRESS: Things are happening across the country and the National Action Network (NAN) seems to have been involved in several, if not most of them, as the go-to organization for support, guidance and stand-taking. Your thoughts on the missions, the reach and the people’s trust nationally in the National Action Network?
ATTORNEY MICHAEL A. HARDY: We are coming up on 30 years of National Action Network as an organization and I am proud to be part of it and to support what The Rev. Sharpton does and the services and opportunities he and the National Action Network provide to families and communities.
The work of The Rev. Al Sharpton and even myself preceded the National Action Network.
Many people have seen the recent HBO documentary “Yusuf Hawkins: Storm over Brooklyn” about the Bensonhurst tragedy in 1989. National Action Network was born out of that whole Bensonhurst incident and the attempted assassination of Rev. Sharpton after one of the marches.
People know NAN because we have built an organization, under the leadership of Rev. Sharpton. They know the work we have done. They know how to reach us. They know where to go when these situations happen. and they often do.
Rev. Sharpton has a nickname, Rev. 9-1-1.
It’s come to the point when it is understood when we can’t come. But when National Action Network goes to a community to help with a situation, it comes as an organization. When a police officer has a situation, the police union will come to provide the back up and help the family or to see situations arising and have the officer be prepared.
National Action Network provides that same work for many of the families that ask for support. We support them in all ways to give the organizational backing that they need in order to challenge the institution in various situations that they may be confronting.
If you think about what Rev. and NAN have done, looking at say, the Sean Bell family, the Gwen Carr family, Sabrina Fulton, we not only help these families, but we inspire them in a way that gives their lives new meaning and purpose. Someone like Gwen Carr was not only the mother of a victim, Eric Garner, but she herself has found new purpose in life to do things.
In some ways, Rev. Sharpton delivers miracles in the support and the justice he stands for. That’s me talking. Not him. It’s my observation over the years.

OTP: Last Friday’s “Commitment March.” What is community media being asked to commit to?
MH: Media must tell truthful stories. A diligent story. Ask the right questions. There are times when you may enter an interview, particularly major corporate mainstream media entities. You listen to the whole interview and you say there are more commonsense questions that could have been asked to give the reader an understanding on what’s happening here with a perpetrator or a victim. So they may tell a story that they want to tell as opposed to what is actually happening. Media entities that really seek to tell the unbiased story do the greatest service to the community they serve.

OTP. That reminds us of Rev. Sharpton’s statement on Friday: doors must be opened. We need a new conversation. What kind of conversation is that?
MH: When people want to commit, to helping and changing a situation, they must be willing to engage in it, and do something they may not be completely comfortable doing but is the right thing to do.
That’s how you really progress: have a partnership. It’s not the case that partners agree on all things. But, ultimately, they realize what the right thing to do is.
Look at what happened in the core part of the Civil Rights Movement from 1955 to 1968. The Congress that confirmed Thurgood Marshall as a Supreme Court Justice, and that passed the 1964 Civil Rights Act of 1964 and the Voting Rights Act of 1965, the Housing Act and on down the line, did not all want to do those things. But they knew that history put them in a situation where it was impossible for them to say, “No.”

OTP: In that history, not so far ago, in 1989, is the group killing of Yusuf Hawkins in Brooklyn and, in recent history, last February, the deadly shooting of Ahmaud Arbery by racists in Brunswick, Georgia That’s a 30-year span. What do you see has changed and what remains the same?
MH: The Arbery situation was a deviation.
After the Michael Griffith’s case at Howard Beach and Yusuf Hawkins in Bensonhurst and other cases that occurred in the South, you no longer saw that type of non-police racial violence against individuals. You may have seen discrimination happen, but that type of violence is a throwback to earlier days. The difference is: because of the movement that was built around those cases, the authorities had to act on them quickly. If there was a tape like in today’s environment, that would have made them different cases, and would have led to a full prosecution of the perpetrators.
Then again, the dynamics is a result of the work that has evolved from many organizations, and the underlying need to be responsive.

OTP: As you react to the various incidents happening now, do you wish there had been a camera present earlier in your career for a record of what was happening back then?
MH, Esq: Obviously, had there been a camera present for Amadou Diallo, Sean Bell and some of those earlier incidents, it might have made a tremendous difference.
However, even without the camera, you still fight the cases. There’s always enough evidence available to know that something happened that should not have happened. Would a camera have made a difference for any of the officers in those cases being convicted or not, no one knows. Certainly, a camera would have made it a different type of case.

Committed to the March