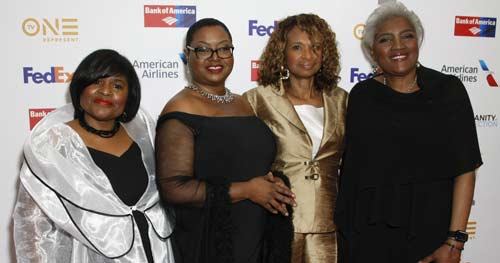 In the heat of the Democratic primary, the Black girls at Hillary Clinton’s Brooklyn headquarters huddled in the corner of the office to hear from a very special guest. Reverend Leah Daughtry, the two-time CEO of the Democratic National Convention, was a new face and name to many of the young Black women currently working tirelessly to elect Clinton.

We sat there, tired in the midst of a hotly contested primary, and listened to Reverend Daughtry tell us the story of The Colored Girls. And were transfixed by that story.
For the uninitiated, The Colored Girls are living legends in Democratic circles. In 1988, while staffers on the presidential campaign of Michael Dukakis, The Colored Girls—a group that includes Donna Brazile, Minyon Moore, Yolanda Caraway, Tina Flournoy, and of course Reverend Leah Daughtry—staged a protest after their office was moved, creating a power center on one floor and putting all of the people of color on another floor. The Colored Girls were not having any of it.
Knowing they needed to be as close as possible to that power center, they set up shop inside a conference room on the floor they had been told to move from and posted a sign on the door: “For Colored Girls Only, We Shall Not Be Moved.” And they did not.
They began working out of this conference room until the issue was addressed within the Dukakis campaign’s leadership. Eventually, the conference room became a central workspace for all members of the staff, of all backgrounds. And it cemented their legacy forever.
Zerlina Maxwell, Essence Magazine, September 15, 2016

VP-Elect Harris Chooses Tina Flournoy to be Chief of Staff