Kofi Annan: A Model Statesman for the World
Advertisement 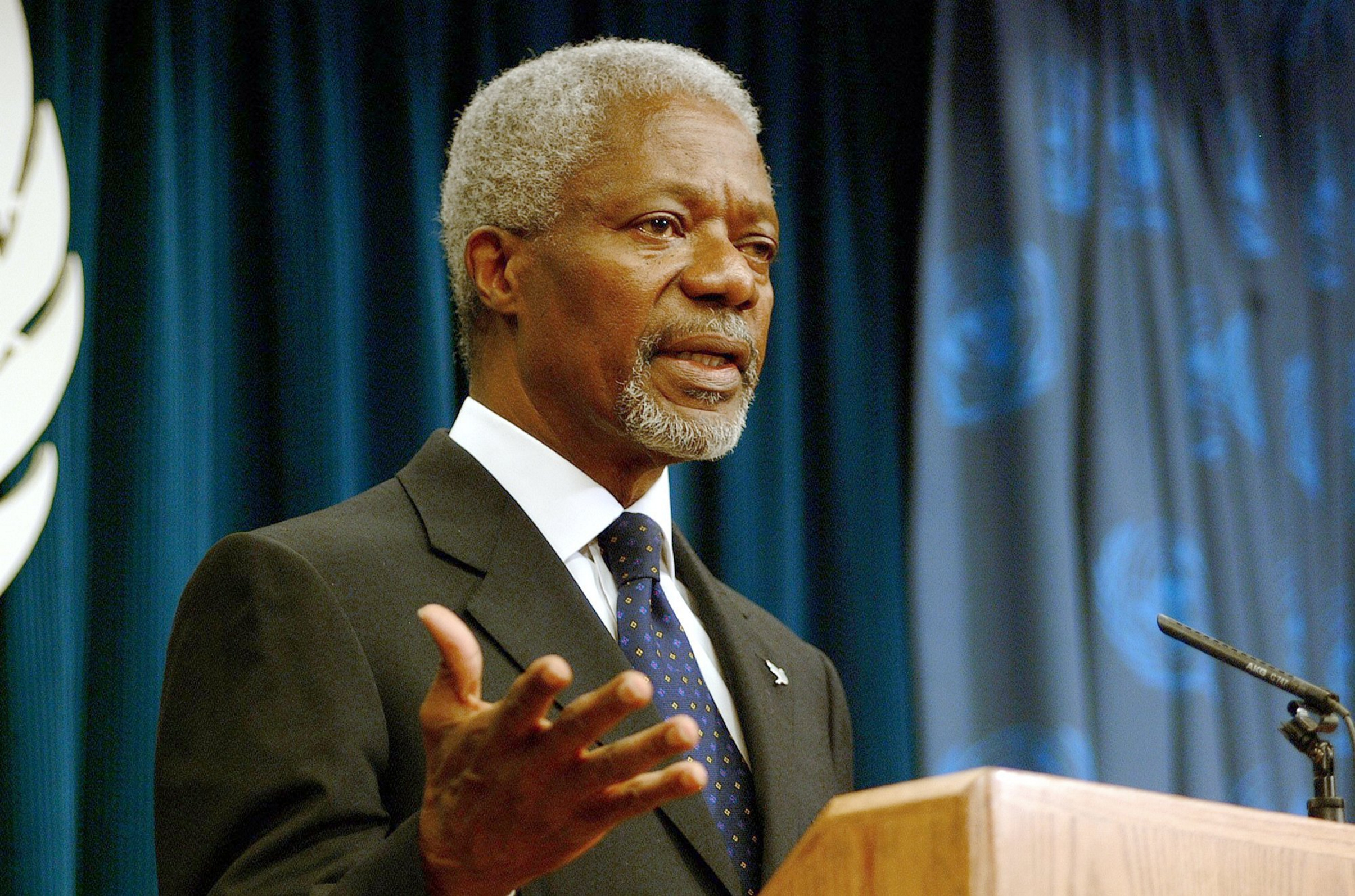 During this time in America when the President of the United States is an unindicted felon and reading about the happenings in and around the White House leaves you feeling dirty, it is good to remember, even at his passing, Kofi Annan. “Annan came from a line of Ashanti tribal chiefs,” writes James Traub in Foreign Policy. “He understood, in the chiefly way, that one could win by allowing the other man to feel that he had won, a strategic act of ego suppression whose merits one could not even explain, much less justify, to the current President of the United States.” Annan was a different sort of leader. A different role model for the world. His current activities and his biography from the Kofi Annan Foundation are below.

Kofi A. Annan was the 7th Secretary-General of the United Nations and is the founder and chair of the Kofi Annan Foundation. In 2001, he and the United Nations were jointly awarded the Nobel Prize for Peace. Kofi Annan was praised for being “preeminent in bringing new life to the organization.” (Norwegian Nobel Committee, October 2001)

With the Kofi Annan Foundation, Mr. Annan mobilizes political will to overcome threats to peace, development and human rights.

Mr. Annan believes that the expertise and evidence needed to solve pressing problems such as poverty, violent conflict and poor governance in most cases already exists. Progress is held back too often due to a lack of leadership and of political will to use it to identify and deliver solutions.

Kofi Annan set up the Kofi Annan Foundation in 2007 to mobilize leaders of all sectors to provide leadership where it’s needed. The foundation works on the premise that there can be no long-term peace without development and no sustainable development without peace. And no society can long remain prosperous without the rule of law and respect for human rights.

The foundation works to identify new threats to peace and security and supports Mr. Annan’s preventive diplomacy and mediation activities. Kofi Annan chaired the Global Commission on Elections, Democracy and Security (March 2011 to September 2012), and in January 2013, launched the West Africa Commission on Drugs, as a response to the surge in drug trafficking and consumption in West Africa and their impact on security, governance and public health.

The foundation also works with select partner organizations to amplify Kofi Annan’s voice and catalyze effective action on the promotion of food and nutrition security, sustainable development and support for good governance, the rule of law and respect for human rights.

In early 2008, he led the African Union’s Panel of Eminent African Personalities, which mediated a peaceful resolution to post-election violence in Kenya. Today, with his Foundation, Mr. Annan devotes considerable time to supporting democracy and elections with integrity.

From February to August 2012, he was the UN–Arab League Joint Special Envoy for Syria, mandated to seek a resolution to the conflict there.

Mr. Annan is the founding Chairman of the Alliance for a Green Revolution in Africa (AGRA), which works for a food-secure and prosperous Africa by promoting rapid, sustainable agricultural growth based on small-holder farmers. AGRA’s programs invest in soil regeneration and health, improved seeds, access to markets and building capacity and investment throughout the agricultural value chain.

He chairs the African Progress Panel, which advocates at the “highest level” for equitable and sustainable development in Africa. The panel includes distinguished individuals from the public and private sector and publishes an annual Africa Progress Report.

He is an active member of The Elders, an independent group of global leaders who work together for peace and human rights, and in 2013 was appointed its chair.

Kofi Annan is currently Chancellor of the University of Ghana and has held a number of positions at universities around the world.

He is a board member, patron or honorary member of a number of organizations including the United Nations Foundation. A complete list can be found here.

Kofi Annan’s widely acclaimed memoir, “Interventions: A Life in War and Peace,” was published in 2012.

Kofi Annan was UN Secretary-General from January 1997 to December 2006. One of his main priorities during this period was a comprehensive program of reform that sought to revitalize the United Nations and make the international system more effective. He was a constant advocate for human rights, the rule of law, the Millennium Development Goals and Africa, and sought to bring the organization closer to the global public by forging ties with civil society, the private sector and other partners.

At Mr. Annan’s initiative, UN peacekeeping was strengthened in ways that enabled the United Nations to cope with a rapid rise in the number of operations and personnel. It was also at Mr. Annan’s urging that, in 2005, Member States established two new intergovernmental bodies: The Peacebuilding Commission and the Human Rights Council. Mr. Annan, likewise, played a central role in the creation of the Global Fund to fight AIDS, tuberculosis and malaria, the adoption of the UN’s first-ever counter-terrorism strategy, the acceptance by Member States of the “responsibility to protect” people from genocide, war crimes, ethnic cleansing and crimes against humanity.  His “Global Compact” initiative, launched in 1999, has become the world’s largest effort to promote corporate social responsibility.

Mr. Annan undertook wide-ranging diplomatic initiatives. In 1998, he helped to ease the transition to civilian rule in Nigeria. In the same year, he visited Iraq to resolve an impasse between Iraq and the Security Council over compliance with resolutions on weapons inspections and other matters; this effort helped to avoid an outbreak of hostilities which was imminent at that time. In 1999, he was deeply involved in the diplomatic process that led to Timor-Leste’s independence from Indonesia. He was responsible for certifying Israel’s withdrawal from Lebanon in 2000, and in 2006 his efforts contributed to securing a cessation of hostilities between Israel and Hezbollah. Also in 2006, he mediated a settlement of the dispute between Cameroon and Nigeria over the Bakassi peninsula.

Mr. Annan’s efforts to strengthen the organization’s management, coherence and accountability involved major investments in training and technology, the introduction of a new whistle-blower policy and financial disclosure requirements, and steps to improve coordination at country level.

Kofi Annan joined the UN system in 1962 as an administrative and budget officer with the World Health Organization in Geneva. He later served with the Economic Commission for Africa in Addis Ababa, the UN Emergency Force (UNEF II) in Ismailia, the United Nations High Commissioner for Refugees (UNHCR) in Geneva, and in various senior posts in New York dealing with human resources, budget, finance and staff security. Immediately before becoming Secretary-General, he was Undersecretary-General for Peacekeeping. Kofi Annan facilitated the repatriation from Iraq of more than 900 international staff and other non-Iraqi nationals (1990), and also served as Special Representative of the Secretary-General to the former Yugoslavia and Special Envoy to NATO (1995-1996).

Kofi Annan was born in Kumasi, Ghana on April 8, 1938. He is married to Nane, and between them they have three children.