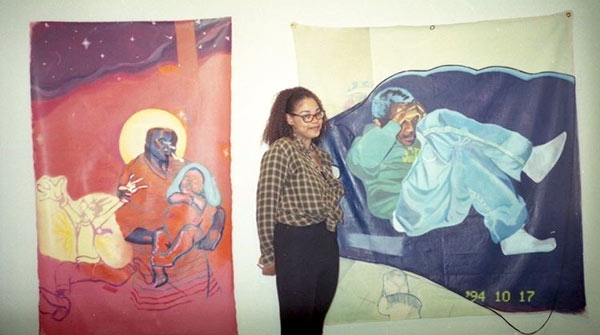 The scribes on this page cite the genius (and spirit) of Lemuel Mial as a motivational force in their lives.
In his public life, Mr. Mial was the architect of many programs that served families, youth, and residents.
And he was the same in his private life with family members and friends.
He cultivated the community’s next generations to learn skills useful in all areas to forge ahead in a number of careers, the fine arts, performing arts, teaching, music, construction, culinary arts, gardening, producing and more.

On this page are artworks by Mial’s Brooklyn-born granddaughter Maya Herdigein, a millennial born in 1993. She is a painter, sculptor and textile artist who paints portraits and surrealist landscapes using her family and cultural iconography as an inspiration. She graduated from the San Francisco Art Institute with a BFA in Painting in 2018.   “ Our grandfather was an iconoclast, a true one of a kind,” she told Our Time Press.

Mr. Mial’s grandson Ishawn Owens, above, a lead dancer in the popular Brooklyn-based dance collective, Masterz At Work, is a born entertainer. Owens recalls his grandfather influenced his friends. Courtney Washington, Masterz At Work founder and choreographer, says she was inspired by Mr. Mials. “He encouraged the group to practice and perform at Von King Park over the years,” (when it was open to the public).

Our Time Press’ first collaborative project with Lemuel Mial (under the editor’s Project Green venture)  was an events partnership with the Brownstoners of Bedford-Stuyvesant at Von King Park in July 2004:  the first Bedford-Stuyvesant Children’s Book & Reading Fair. It was designed to celebrate reading and give away free books. Local and national writers and authors signed books; elders told their stories; political and civic leaders spoke of the joys of reading and the history of Bedford-Stuyvesant.  The late Dr. Mary Umolo and Weeksville’s Joan Maynard were presenters, and the Hon. Al Vann was a keynoter.  Borough President Marty Markowitz attended and discovered a star-student for his Wingate Concert series from music instructor Patricia Graham’s array of young concert artists.  Von King Park’s open-air amphitheater served as a large reading room space for book-lovers, young and old.
But for Mial it was more than “another Von King Park community event.”

The long-range goal, he told us, was to “impact reading scores in the school district and beyond.” He said the short-term goal was to “inform parents of Von King Park as a sanctuary for reading, literacy and educational resources, and afterschool homework tutoring.”  Under Mr. Mial, we remember Von King Park (closed since 2013) as a place where children learned to plant trees; could sing songs about nature; celebrate pioneer Hattie Carthan, Brooklyn’s first internationally known urban ecologist of color Hattie Carthan; and also where parents and guardians, parent coordinators, educators, STEM advocates and scientists could share information.
It was an open-air school where Bedford-Stuyvesant history was learned… and made. And a teacher named Lemuel Mial brought out the best in everyone he met.

The Best of Our Time LEMUEL MIAL