The Best of Our Time LEMUEL MIAL
Advertisement 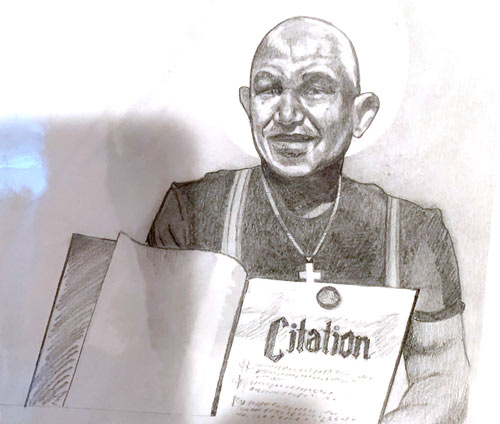 “Mr. Lemuel Mial will be remembered for his brilliance, creativity and dedication
to the transformation of the VON KING CULTURAL ARTS CENTER.
I am happy to have had the opportunity to work alongside him to make Von King a park for all ages.
Under his leadership, I learned so much. He was not just a man behind the desk, you also had to join him.
He was willing to work with anyone to provide programs for the community. “No was unacceptable!”
I will always remember the fun times when Mial and I would dress up as
Mr. & Mrs. Santa Claus, Mr. & Mrs. Easter Bunny, The Monsters for Halloween.
Before we got dressed up, Mial would have detailed designs and blueprints for each stage program.
Everyone would have a hammer; no details could be missed. He wanted the best for the community he served.
And thousands of children and families hundreds of thousands of residents
received the best from him. He was a man of excellence.
KAREN GRIPPER/
Ex-coworker and friend

“A friend was listening to some classic tunes the other day and my mind instantly ran on Mr. Mial.
I knew of Mr. Mial for many years before I began working for and with him at Von King.
That experience confirmed everything that I had heard of him and more. He was a joy to be around.
He was professional, he was fair, he was kind and he was exceptionally creative.
He and his wife were the epitome of the now trending term “Black love”.
I loved him and appreciate every moment, every project and every event.
I know that his heavenly wings are truly majestic and fit for a king.’
DEIRDRA LACY, Friend, Former Co-Worker

“Mr. Mial’s was warm like an old shoe that fits exactly right.
From the time he walked into my life (or I came into his), he was a friend
who was more like a father who was more like a brother.
Conversations with him from the onset were fluid, notable.
we composed songs together, we created music for schoolchildren. Mial’s had that way about him;
the ability to bring out the best, and take best to higher ground;
Even now, several months after his passing,
I pick up the phone to call him, forgetting that
Mr. Mial’s has finally found a better home.”
LARRY BANKS, Former co-worker, Co-Composer, “Like an Oak Tree”

“Lemuel Mial was an amazing leader who positively affected thousands of lives
during his 30-career with NYC Parks. He made a huge mark in improving the quality of life
in Brooklyn. That spirit will continue on in the thousands of lives he has touched
The love and enthusiasm he had was contagious to all who got involved
with Herbert Von King Park, both youth and adults.
A great example is the “Von King Dinner Theater” series.
From singing to composing and recording original music to his performances
to theatrical lighting, set design and sound to the culinary arts and community service.
Lem inspired so many to do their absolute best and to strive towards perfection.”
MARTIN MAHER/NYC PARKS, Brooklyn Borough Commissioner

“Mr. Mial’s was my platonic father. He was a man of great wisdom, a sage.
He was my counselor.
We built sets together for every production at the Von King Cultural Arts Center.
He was a man of wisdom, a man who could shape a whole new world from scraps of wood.
If you could think it, you could create it. And we always did because, like a good father,
he always found a way. I loved working with him. I loved the man.”
BERRIS ALSTON/ former-coworker and job son

“My dad was an extraordinary man; he always had the ability to make you laugh no matter what.”
CHARLETTE KISSI/ Daughter

“My dad an amazing man of very few words who loved you unconditionally in his own amazing way.”
LEMUEL MIAL Jr./ Son

“I have been blessed with a man who was everything to me: friend, confident, teacher and kindred spirit.
If I decide to write a story about true love it would be the story of the love of my life — Lemuel Mial.”
Charlotte R. Jarrell-Mial

“My father was fearless, full of faith and unique to a fault, because he was unafraid to be himself.
What others believed, or thought made no difference to him. He was consistent,
Spoke truth to power. And yet he was
humble.”
DERRICK J. JARRELL/ Son

“My granddad always motivated me to Never Give Up!
“The Sky’s the Limit,” he would tell me.
And he was right. He inspires me, still.”
OLIVIA CROSBY/ Granddaughter

“Mial’s was an awesome mentor and supporter to me for 17 years at NYC Parks.
Mial’s and I executed the first Special Olympics at BRC in Brownsville when he was the manager, there.
He put his trust and confidence in me and under his leadership, I nailed it – just as he said I would.
Boss man, I know you are bidding adieu to all of us; just know that your legacy
will remain deeply inscribed in our hearts.”
NEVERSEE DAVIS/ Ex-coworker
and friend

“My dad wasn’t a man of many words but when he spoke…
you could always count on it being honest and quick.
It may not have been what you wanted
to hear,
but it was always what you needed to know.”
LUCHANA R. JARRELL-HAYNES/Daughter

“My grandfather was very talented, especially in music and writing.
He was also inspiring to me because of his
acts of everyday kindness.”
RENEE CAVINESS/ Granddaughter

“Being friends with a brother like you was easy. But, losing you was hard.
And of all the love songs we sang, your notes on good living
And how you lifted your voice on behalf of the people
Are he soundtracks for life and living we will never forget.
Hey Mial’s, we love you. “U4RIA” agrees: though our harmonies were tight,
our friendship was tighter. So, we are still four singers with one sound.
Boo, Lee, Don, Mial … Love for Eternity.”
EDMOND BADY/ U4RIA

“Lem and I had something in common; we loved playing golf. We both were extremely competitive, but we always had a great time.
We would not just play, we also had good conversations. He taught me a lot about life.
I appreciated the advice he gave me; I will miss those days and, more importantly, I will miss our friendship.
Rest in peace my brother, I’ll see you on the 19th hole.”
RICHARD JARRELL/Brother-in-law

“Mial’s was educated, talented, a gentle soul. He was a loving man with a great spirit, along with being a jack of all trades. You name it, he did it! He was a leader, songwriter, teacher, just to name a few of his amazing attributes. We are all truly blessed to have shared those special times with him during our singing career! He will be deeply missed.”
LEE LAWSON/U4RIA

“My grandfather was a cool, calm, collected and a loving, caring man.
He respected all his grandchildren’s opinions and accomplishments,
and he encouraged us
To do our best, at all times. Grandfather, you, are the best.”
KADEEM KELLY/ Grandson

“My “Pop” was incredibly special to me in a lot of ways, whenever I needed advice or attempted to solve a problem or seek alternatives,
I went to him. Pop had a unique way of guiding me in the right direction.
I will miss his wit, knowledge and the love he showed all of us.”
SEAN JARRELL/ Son

“I knew Lem for over 50 years and during that time he was always a quiet/gentle person who never had a bad thought about
or negative response to any individual. My experiences with him started at a very young age as my basketball coach.
His children, grandchildren and greatgrandchildren adored him.
Moreover, his wife Charlotte, my sister, loved him. He will be missed.”
THOMAS E. JARRELL/ Brother-in-law