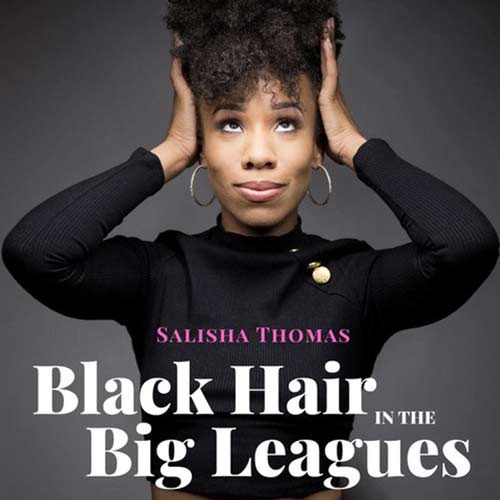 Dr. Maria DeLongoria
As a Black woman growing up in the United States (U.S.) with all of the nuances as well as the complexities that accompany the politics of Black hair, it was easy to develop that love/hate relationship that so many of us have. Mine started with me sitting locked between my mother’s legs as she snatched the comb from root to end while my screams echoed through the house earning me the nickname ‘Mari-ooch Mari-ouch’. I need to add that my mother, a Black woman, has straight hair. I, a Black woman, do not. And although she was not performing the dreaded ‘comb test’ on me, she most certainly was combing my hair the way she combed hers.

I was also limited in the ways in which I was allows to wear my hair, but more on that later. As an adult, I have worn my hair in every conceivable way that Black women embrace with the exception of weaves. I have had braids (all types), twists, finger waves, relaxers, innovation dry curl, texturizers, locs and what I call freedom hair.
And while I have proudly worn all of these black-girl styles, my identity, my hair type, and my style choice were [are] constantly called into question. What we need to fully embrace is that just as Black complexions range from one end of the spectrum to the other, is that there are multiple Black hair experiences that allow for multiple Black hair realities.

I was limited in the ways I could wear my hair as a child.

I had two or three braids –no beads or extra adornments except for a barrette (bubble) at the root and another on the end to hold the braids in place. I envied my friends’ cornrowed styles so much that I learned to braid while still in elementary school. Yet, still I was only allowed two braids so I wore two cornrows, and then lied about doing them fresh everyday -that comb to scalp thing.
When I was fourteen, I spent the day box braiding my entire head and adorning the ends with beads and tinfoil as was the style at the time, only to have my mother come home and make me take them all out. I think my mother was limited in what she could do with my hair since our hair was (is) so drastically different; she had no idea how to handle the unrestrictive freedom hair that adorned my head. Even now she remarks at how much better I am with hair than she is and she will recruit me to do hers when she does not make her bi-weekly salon appointment. I on the other hand, hit the salon maybe once or twice a year when acknowledge that my ends need professional trimming.
As an adult, I had my hair loced for about ten years and she would routinely threaten to cut my hair if I fell asleep around her. Although she would not have actually done so, her threats were rooted in perceptions of loced hair and the fear she held about the acceptance and employability of her daughter.

This was even more evident when she suggested I wear a wig for a teaching interview that I had some years later at a college in the southern United States. She was concerned how I would be received and more importantly judged. This, as well as the reluctance to allow me to wear the hairstyles I so longed for as a child were wrapped in respectability politics.

My multi-generational African American mother with the straight hair believed that you had to run that comb from the scalp every day or your hair was not
‘done.’ If you had multiple braids or cornrows you were not able to ‘do’ your hair and respectable people ‘did’ their hair every day.
Over the years I have experienced my share of hair-focused microaggressions ranging from questions and statements such as: Why would you do THAT to your hair?; Will it stay like that?; Do you think your locs make you look more Black?; I know you think it looks more professional this way but it looks better the other way; Having a bad hair day?; Did you do your hair?; Boy your hair is wild today; and, Can you calm it down some? I, the only Black woman holding a senior level administrative position, was pressured by an employer to participate in the then popular ice-bucket challenge at work with male colleagues. This was the challenge where a bucket of ice water was poured over the participants’ heads. I have been told that I was more militant because I had to prove how Black I was like the many other ‘angry high yellas’ and that this contributed to my hair style selections.

At different periods in my hair history, I have resorted to cutting my hair short to hide from this hair politics that take a toll on everyone regardless of texture. But I am working through my issues. Today, I do not own a comb. Using one sends me back to the sounds of breaking stands from my Mari-ooch days. Instead, my freedom hair is free. It may be braided one day and twisted a few weeks later. Perhaps it is adorned with shells or jewelry. I am no longer ashamed or feel guilty when it grows beautifully big and wild. Now when I cut it, it is because I want to, not because I am running from public scrutiny. There are days when my hair receives more love and attention than others, and days when it falls into a better groove than it did the day before. Whatever the temperate of the moment, I take it in stride. I remind myself that there is power in looking the way I want and I own that.

The full text of Dr. DeLongoria’s paper entitled Misogynoir: Black Hair, Identity Politics, and Multiple Black Realities, from which this Op-Ed is excerpted, can be found online at: http://www.JP:anafrican.org/docs/vol12no8/12.8-3-Maria%20DeLongoria.pdf
Dr. DeLongoria is Chair of the Department of Social & Behavioral Science; Executive Director, Caribbean Research Center; and Associate Professor of History at MEC – CUNY.