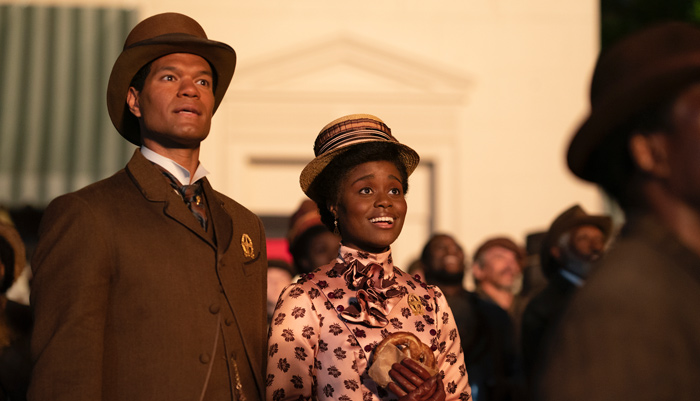 The Gilded Age is HBO’s lavish, opulent drama that not only tells a saga of New York City’s wealthy robber barons during the 1880s, but also explores the White Victorian Era middle class and the emerging Black American elite, entrepreneurs and intelligentsia.

“The Gilded Age is one way of thinking about that period of time in New York, but it’s really Reconstruction post-Civil War. Black people can finally participate,” explains actor Sullivan Jones, who portrays legendary Black journalist T. Thomas Fortune. “So, there’s this unleashing of energy among Black people want to get into politics, science, engineering and journalism. We haven’t been able to participate in any realm or any capacity, so let’s get after it. T. Thomas Fortune was at the tip of that sphere.”

For inspiration, Jones journeyed from his home in Brooklyn to Red Bank, NJ to visit the Victorian mansion that was once the home of Fortune from 1901 – 1911. Fortune had been helming The New York Globe, the largest and most influential Black newspaper since the 1880s. At the T. Thomas Fortune Cultural Center, Jones was inspired by the magnificently restored home that still had the aura of Black Victorian wealth and achievement. The home is listed as a National Historic Landmark. Fortune, who was born in slavery in 1856 and studied journalism at Howard University, was friends and colleagues with W.E.B. DuBois, Ida B. Wells and Booker T, Washington. Jones was born and raised in the San Francisco Bay area and earned a bachelors at the UCLA School of Theatre, Film and Television and a masters in drama from Brown University. In recent years. he has fascinated audiences with his stand-out performances in TV miniseries “Harlem” and “Halston” and in the Broadway drama “Slave Play.” For Jones, portraying activist-journalist Fortune, a sometimes forgotten giant in Black history, was a dramatic challenge that he embraced.

“During the Gilded Age, Fortune is making noise. He’s in organization mode. He was railing against Reconstruction, because he saw it as what it really was–a total failure as it applied to African American people and the economics of that time,” explained Gilda Rogers, award-winning journalist and executive director of T. Thomas Fortune Cultural Center, who met with Jones. “Yes, we were able to get our way into some places, but he’s still fighting. That’s when he starts using his newspaper as a bully pulpit to speak out. In 1887, he was the founder and organizer of the National Afro American League. It was precursor to the Niagara Movement and to the NAACP. Fortune is a trailblazer in this time. He is really opening the doors. He’s been called the bridge to modern day civil rights movement for that reason.”

Achieving the right voice and tone for Fortune was a sensitive issue for Jones. He is a sought after book narrator and winner of the Earphones Award. He immersed himself in Fortune’s books. “I did bring in a little bit of the southern flavor. He’s from Florida, so he has to have some of that drawl. He’s obviously a man of letters, so he has to think fast and he thinks quickly. I thought of him as a teacher and an educator,” he said. “I was also inspired by the voices of Cornell West, Ta-Nehisi Coates, Stokely Carmichael and Bobby Seale. There’s a crispness and a clarity and incisiveness with how they speak.”

Black women are instrumental in HBO’s “The Gilded Age” The co-writer, co-executive producers and director are Black women, who make it a point to showcase Black Victorians. One of the primary characters, actress Denee Benton has a family storyline with mother Audra McDonald, wife of a noted Black businessman. Benton becomes the only woman writer for Fortune at The New York Globe newspaper.

Julian Fellowes, the creator of “Downton Abbey” and “The Gilded Age”, tapped Sonja Warfield, to be his co-writer and executive producer of “The Gilded Age.” Warfield is a television writer known for the Emmy Award-winning NBC sitcom “Will & Grace” and BET’s hit comedy “The Game.” “When they offered me the part, I had a Zoom chat with Sonja and asked are we going to do him Fortune justice,” recalled Jones. “I could just tell she cared in the same way feeling like your custodian of the history. She was instrumental in shepherding the project along.”

Dr. Erica Armstrong Dunbar, noted Rutgers University history professor and an award-winning author and 18th and 19th century scholar, was the official historian on set and a co-executive producer of “The Gilded Age.” “She was the etiquette person,” he said. “One time I went to shake my co-star’s hand, she ran in and said ‘no, no, no, that’s not how they shook hands.’ During that time, you grabbed the tip of the fingers with your thumb on top.”

Salli Richardson-Whitfield, director and executive producer of “The Gilded Age,” is known as an actress, but she’s directed episodes of “Eureka,” “Queen Sugar,” “Underground,” “Scandal” and “Luke Cage.” “She directed half of the season,” said Jones. “She was also really instrumental, being there and setting the tone and making us feel comfortable, fielding questions and being a go between us and creative team.”

Working on “The Gilded Age” made Jones closely study and admire the post-Reconstruction Era that introduces Black Victorian strivers and activists. “In the 1880s, Booker T. Washington, W.E.B DuBois, Ida B. Wells and T. Thomas Fortune are surviving by the skin of their teeth,” he said. “And there’s no lure of popularity and richness. They’re just trying to make it work for Black people.”

-Bernice Elizabeth Green is editorial curator of Our Time At Home.

No, Will Smith slapping Chris Rock doesn’t set Black people back. But anti-Blackness will