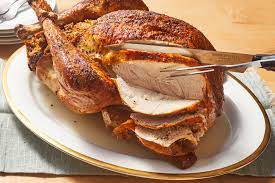 Gone are the days when you could put the carcass of a dead bird on the table and have everybody oh and ah at the sight of the shiny, crackling crisp skin. Remember the Charles Lamb essay: Dissertation Upon Roast Pig? Remember the part when they lick their fingers and then go back for more? It’s almost Proustian. In Swann’s Way, the guy dips a Madeleine cookie into a cup of tea and then waxes on for pages and pages. “No sooner had the warm liquid mixed with the crumbs touched my palate than a shudder ran through me, and I stopped, intent upon the extraordinary thing that was happening to me.” Imagine how many chapters he could do with his first taste of pungent turkey skin.

As an only child I always got the leg. Not once did I look in the mirror and see myself as King Henry VIII with grease dripping down my chin, wiping it off with the sleeve of my brand-new Best and Company Thanksgiving frock. I also got the wishbone. It’s good to be a princess. My mouth would start to salivate as I watched the knife glide through the breast, seeing the juices ooze from this lifeless, hapless fowl. Sometimes we would have a suckling pig with head in tack. It would lie in the middle of the table like a newborn child sleeping on his tummy. The rich aroma was sublime. That was then, this is now: my son has two adopted rescue dogs. One from Mexico and one from Thailand. The one from Thailand has been having a difficult time adjusting to American life. Not just because he doesn’t speak one word of English as in “Sit” “Come” “rollover”, but mainly because he was rescued from a situation in which he was about to be eaten. The image of seeing Fido on the table, with his skin all shaved and shiny, ears perked up and tongue hanging out of his mouth, just like the suckling pig, is not the most appetizing one for this holiday season.

Yet, how is it any different? The pig in the Lamb essay has the same IQ has Fido. The pig could be trained to do the same tricks, the same obedience and and give the same loving as Thai Dog. Why is it okay to eat pig skin and not puppy “pois”? Nowadays, if you don’t, please everyone’s aesthetic taste, you are an insensitive Luddite. So, it is with great trepidation that I serve this year’s Thanksgiving dinner. My friend gave a dinner for her California daughter in law…Lobster and steak…or surf and turf. When seeing the lobster thrown into the boiling water, the daughter in law got up from the table, went into the bathroom and threw up. Her husband, the son of the woman was mortified. “How could you serve something as barbaric as that?”

After five years, he finally allowed the grandparents to see their grandkids on the condition that no food that was a result of killing be served, eaten, or bought. I’m telling ya, I run with a rough crowd. Worst of all, the onus is on me. I am the grandma. I’m the one they came over the river and through the woods to see. I have to please three generations of food values. This is a totally lose, lose situation. I can deal with no meat, I can make it with no gluten but no fish, no fowl, no dairy (lactose intolerance) no sugar, no veggies from non-heritage seeds? Come on, where’s the fun in this? Thanksgiving is supposed to be a lot of fun. True, it may be a commercially based holiday with horrific roots of slaughter; but, when families get together and eat themselves into a stupor for just a few days, it can be a blast…or..used to be a blast. Unlike Christmas, which can be riddled with the tension of gift giving, all you gotta do on turkey day is show up…okay, maybe you can wash the dishes.

Celebrating the holiday with a dead animal in the middle of the table can be a bit of a downer for those of us who support life. It is difficult to justify being anti-war, anti-killing, anti-torture and then say prayers facing the corpse of one of God’s creatures. A dumb one to be sure, a steroid laden one at that. Nevertheless, it was once alive, possibly hanging around Tisbury with their family, stopping traffic whenever they felt like it. Now it lies morbid, defeathered and deeply tanned. I would like to think that it is not the food which brings us together. It is the spirit of love. Unconditional love you have for your friends and family that says no matter what you have done to me, you are forgiven. If Native Americans can forgive us for the atrocities, we have heaped upon them, surely, we can forgive our sister for borrowing the yellow cardigan without permission fifty years ago. We don’t need to kill something to show love, we don’t need to make ourselves unhealthy to show love, all we gotta do is show up.

Well, my dears, there is a Frankensteinian solution to all those picky eaters. Clearly, the planet cannot sustain the way agribusiness is calling the food shots. According to the United Nations, domestic animals, the ones we eat, cattle, etc. “is one of the most dangerous sources of greenhouse gases and water pollution.” Water shortages are caused by cattle and most of the veggies are grown to feed those animals.

According to CBS’s Seth Doane, there is a lab outside of Tel Aviv, Israel called Aleph Farms. It is growing steak from cow stem cells.
According to Didier Toubia, CEO of Aleph Farms, “We can produce more efficiently in a way which is more ethical, more sustainable and healthier.’

It may sound like science fiction to you, but billionaires are putting money into it, so you can bet your bottom dollar that there will be a profit motive here somewhere which might provide a downside as many Capitalist ventures tend to do; think GMOs (Genetically Modified Organisms)

The folks at Supermeat are already extracting stem cells from chickens. Those stem cells can be manipulated any ole which way. What they do is tweak a mix of proteins and amino acids and abracadabra! Just like that, they can create whatever they want: muscle, fat or connective tissue.

“The beauty with cell-based meat is that once you’ve established the cell bank you don’t need the chicken anymore,” CEO Ido Savir said. “So, theoretically, one chicken could feed the world.”

This is no joke, Israel already has a restaurant which has a glass wall so that you can see the test tube “chickens” being made. Check out Supermeat on the internet and you can see how much progress the industry has made.

The good news is the Tisbury turkeys are not at risk, further good news, your vegan friends cannot say a sanctimonious word. The bad news is…what do they put in that test tube to make it so delicious and is this something I will be thankful for in the future?