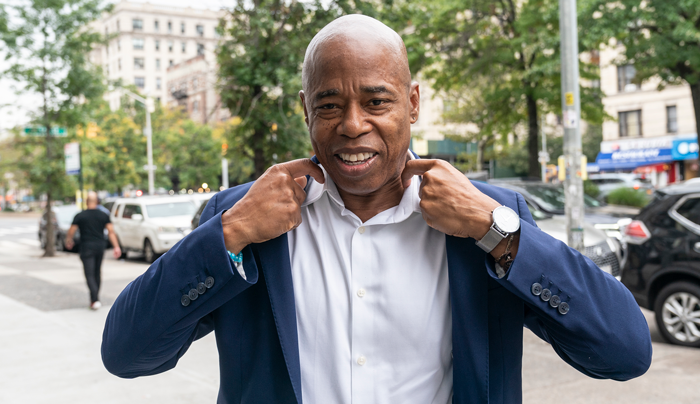 Ready to Go to Work

View From Here
David Mark Greaves
(December 17, 2020 column updated)
Eric Adams is solid, with a PhD. in what is necessary to serve the residents of New York.
From walking a beat as a police officer on New York streets, forming 100 Blacks in Law Enforcement, while rising to captain, working in Albany as a State Senator on legislative issues, and finally serving as President of New York’s most populous borough has earned him that advanced degree.

Give us someone who has dealt with the day-to-day problems of people on the street. Coming up through hard times is not enough. Compelling stories of early life struggles are not enough. Lots of people have overcome obstacles and while commendable, it is not enough.

Eric Adams has earned that political Ph.D. by serving constituencies that span the globe and has had to respond to their concerns. He has been through the gauntlet of community meetings where he’s been applauded, questioned and even cursed on the way to learning what the problems are and earning confidence and votes.

These are the battle ribbons and scars that make you understand the emotions and needs of people on the street. This is learning the job at the granular level. The city needs someone who has been in the trenches, with a history of fighting for New Yorkers every day and not just talking about it with an eye on the next election.

These are the focus groups that matter. Voters who come and challenge you with kitchen table issues about their livelihoods, answering questions about the futures of sons and daughters.

A favorite quote of Adams is from Archbishop Desmond Tutu: “There comes a point where we need to stop just pulling people out of the river. We need to go upstream and find out why they’re falling in.”

Adams says he will be the “working class mayor” the city needs, aligning city agency missions with his emphasis on the health and wellbeing of city residents, and the idea that working on those “upstream” challenges of poverty, diet, early learning, social services, etc. will produce outcomes that are life-enhancing and leading to a safer and more robust city.

(In full disclosure, Eric Adams was an Our Time Press columnist 20 years ago, writing about the problems of the city. That is why we know his commitment runs deep and is long standing.)

USA: The Threat of an Authoritarian State