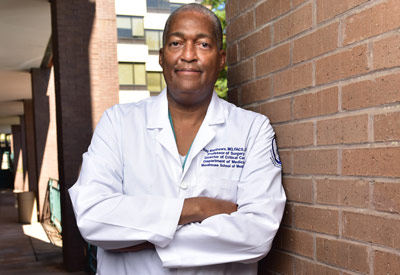 One of the most beneficial vitamins of all is not a vitamin; it is a hormone.

Despite misinformation on what Vitamin D actually is, what’s most important is what “the sunshine vitamin” does for the body. Particularly in times of stress, and when the body is under attack.
So powerful are its qualities, taking too much of it can be as toxic as not taking enough of it. According to Dr. Ray Matthews, it is just about as powerful as the sun, from which it is sourced naturally. He admits to taking the vitamin for 31 years, and not succumbing to even the flu virus.
Dr. Matthews says Vitamin D helps boost the immune system; generally, protects the body from diseases, and most interesting, it gives people of color essential armor for the immune system — a tactical strategy to slow down the spread of COVID 19 throughout the Black community, but left out of the discussion on coronavirus protocols.
Please note: Dr. Matthews clarifies that you should not just run out, buy it, and pop it like you would some vitamins; a health care provider or physician should be first involved to measure the existing vitamin D levels in the blood, but more than likely, Vitamin D levels are lower than we expect. We need it, but too much of it can cause problems so severe that the risks appear to be nearly as great as the lack of it, Everybody is different. And the effects could be toxic if not taken in the proper amounts. Dr. Matthews has made it a personal mission to do the research and tell the world about the hormone known as Vitamin D, its rampant deficiency in communities of color, and its efficacies as a health sustainer.
Dr. Matthews has studied the prevalence of vitamin D deficiency in various groups for more than 30 years. He along with other experts have found that the overall rate of vitamin D deficiency is more common amongst people of color and could be linked to important risk factors associated with leading causes of death in the United States.

Based on this research, we started supplementing all these groups with Vitamin D. (But we had to be careful) with getting people’s levels up rapidly you can get a vitamin D toxicity (if it’s too much consumption).

So, Vitamin D is called the “Sunshine Vitamin.” We were not aware of its efficacies until recent years.
Vitamin D is a true steroid hormone. It can be called an anti-stress hormone. Anytime your body is stressed, you need more vitamin D. And so, you need a lot more than what you normally get. (So if you in the hospital under stress) I would have given you a lot of IV fluids. So, you actually have a larger volume of distribution.

And there are certain medications that lower your vitamin D level too, such as steroids, HIV medications and seizure medications.

And so we started supplementing these patients with vitamin D and we noticed the mortality rate from all the four different groups equalized after a certain point. So, Vitamin D has the potential to positively impact the health disparities that everybody is always talking about in African American communities.

So, vitamin D directly increases the white blood cell count, and it decreases the inflammation that causes all the systemic effects and organ damage one can get.

I think of it as a hormone. And once you know how to use it, you can use it to modulate a lot of different things in the body. Bottom line is you cannot have a healthy immune system if you’re vitamin D deficient.

Most doctors major in biology. They think Vitamin D is a true vitamin. It is not. It is actually a hormone. Then you must understand that also in medical school, importance of nutrition has not been emphasized. The body is one big chemical factory. All processes — everything — in your body are chemical reactions.

So, the (understanding) in medicine is: vitamins or supplements can’t treat anything. But we treat night blindness with what? Vitamin A! Scurvy, which is a vitamin C deficiency, with Vitamin C.

Vitamins can be used to correct conditions and deficiencies and vitamins can affect your body’s processes. So, I was thinking maybe we need a paradigm shift in how we view medicine. For COVID, you need hand washing and social distancing. You need exercise. You need to wear a mask. You need to drink the appropriate amount of water. You need to limit the amount of stress that you undergo. It’s a combination of all those factors together. And so, yes, we need to pay more emphasis on the prevention, instead of the intervention, part of medicine.

With the statistics you cite on African American women having more problems with Vitamin D deficiency than any other group, one would think African American men would have less, not more wellness problems. What is it that we’re not doing?
Well, women are more into preventative care, more proactive in their health care and follow-up, whereas men are not willing to go to a physician unless their wives or somebody encourages them to do so.

An interesting dynamic: African American women may have lower vitamin D levels because they go out into the sun less than any other group.

You spoke of working with trauma patients, but what happens when you’re dealing with stress?
What many do not know is a person’s Vitamin D levels drop 50% within 24 hours of entering a hospital regardless of what the cause for being there. Whether it is a heart attack, stroke, pneumonia, even coronavirus or a gunshot wound, if your level is 30 nanograms per milliliter when you hit the door at the hospital, 24 hours later, your level will be 15 nanograms per milliliter because your level drops.

Well, remember, I said it’s a hormone. When the body is stressed any type of way, it produces hormones to basically help your body fight or deal with the stress. Your body goes into fight or flight response. The stress factor increases like when a dog is chasing you, you may get this supernatural strength where you can jump over a fence and you can lift heavy objects off of people that are trapped underneath. So, under normal circumstances, you couldn’t do this. But when you go into a fight or flight response, you have certain hormones that increase your strength, more blood rushing to your vital organs, more cortisol released and so all these hormones make you able to get away or get out of danger. That’s what hormone D or vitamin D does. It helps your body deal with any type of stress or any type of danger.

What do you want us to tell interested readers to do, and what are the costs?
First, I recommend people go to their doctor and get a Vitamin D blood level test. It’s a simple blood test. They draw it, put it in a red tube and send it off; You can get the lab results back within that day or the next day in most places. You need to know where you are first. If you have a deficiency and it is very low, you will need a great number of international units of Vitamin D which requires a doctor’s prescription. Once you get the levels to normal, then you maintain your required level on a smaller dosage.
You can purchase Vitamin D over the counter. It is actually an inexpensive way maintain your health care. You get optimal health with a simple solution.

The Future of Urban Agriculture …