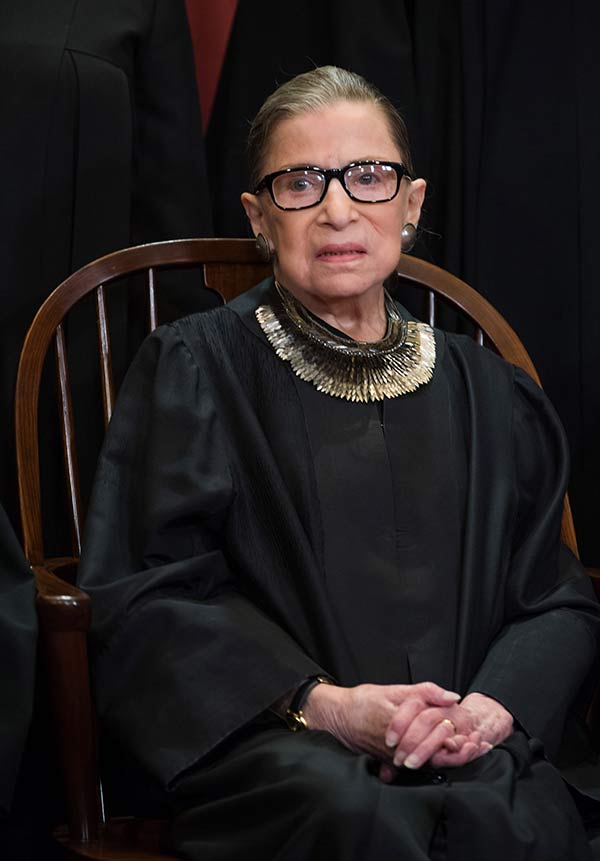 By Aprille Russell
I am heartbroken.
Ruth Bader Ginsburg, Supreme Court Justice and Brooklyn native, passed away September 18 at the age of 87.
I wish that in this moment we could focus entirely on the life and legacy of this amazing woman.
Instead I am terrified by the erosion of women’s rights and civil liberties likely to occur if President Donald Trump appoints her replacement on the court. I am demoralized by the idea the nation is left hoping Senate Republicans apply their no-supreme-court-confirmations-during-an-election-year principles to an election year vacancy under Trump. Pinning one’s hopes on the decency of Senate Republicans is a foolish endeavor in the Trump era.
But let’s not reduce Justice Ginsburg’s life to the ramifications of her death.
Ruth Bader was born the daughter of Jewish immigrants and grew up in the Midwood neighborhood of Brooklyn. She attended Cornell University where she met Martin Ginsburg. She recounted later of her husband, “he was the only boy I ever met who cared that I had a brain.”
Many universities claim Ruth Bader Ginsburg as their own: Ruth and Martin attended Harvard Law School. When Martin was diagnosed with testicular cancer, Ruth typed notes from Martin’s classes while maintaining her own coursework and parenting their young daughter. Two years later, Martin’s cancer was in remission and he was hired by a firm in New York. Ruth’s request to complete her Harvard law degree with classes at Columbia Law School was denied. She transferred to Columbia where she earned her degree.
Although she graduated at the top of her class, top schools including Columbia and New York University would not hire her after graduation. She accepted a teaching position at Rutgers Law School. There she volunteered as a litigator with the New Jersey affiliate of the American Civil Liberties Union and was committed to dismantling laws and policies that discriminated against women.
In what would become a landmark moment, Ginsburg authored the 1971 Reed v. Reed brief. For the first time, the Supreme Court—in unanimous opinion—applied the Equal Protection Clause of the Fourteenth Amendment to women and recognized discrimination on the basis of sex as unconstitutional. Ginsburg named brilliant African American lawyer-activist Pauli Murray as a co-author on the brief in recognition of Murray’s pioneering work applying the Fourteenth Amendment to women’s rights.
Reed was not to be a single battle and victory, but it laid the groundwork for many victories to follow. Hundreds of discriminatory laws in the areas of education, employment, banking, the military, and reproductive rights changed as a result.
In 1972, Ginsburg became the first director of the Women’s Rights Project of the ACLU, advancing a savvy litigation strategy where she argued cases that demonstrated ways discrimination harmed both men and women.
In 1980, under President Jimmy Carter, Ginsburg was appointed to the U.S. Court of Appeals for the District of Columbia Circuit. Ginsburg built a reputation as a moderate and a consensus builder. Martin Ginsburg was his wife’s biggest professional supporter and led a campaign for her consideration as a Supreme Court nominee. Ruth Bader Ginsburg was confirmed by the U.S. Senate 96 to 3 as a Supreme Court Justice in 1993 under President Bill Clinton, the second woman to join the nation’s highest court.
Fast forward to present day, where Justice Ginsburg has become a pop culture icon, dubbed the Notorious R.B.G., a play on the rapper Notorious B.I.G., another Brooklyn-born icon. Ginsburg became known for writing powerful dissenting opinions with her greatest hits including:
Bush v. Gore in 2000, where the Democratic candidate who won the popular vote lost the presidency to a Republican candidate who was handed an Electoral College victory when the court halted the counting of votes;
Ledbetter v. Goodyear Tire & Rubber Co. in 2007, where Lilly Ledbetter was denied the right to sue her employer for gender-based pay discrimination because no one informed Ledbetter sooner she was being paid less than her male subordinates (the columnist rolls her eyes for the majority opinion logic there);
Gonzales v. Carhart in 2007, which upheld Congress’ authority to substitute its so-called medical expertise on abortion procedures over the objections of a woman and her doctor;
Shelby County v. Holder in 2013, where the majority under Chief Justice John Roberts gutted the preclearance section of the Voting Rights Act, opening the floodgates for voter suppression efforts designed to disenfranchise predominantly Black and Brown voters.
Ruth Bader Ginsburg’s dissents were well-crafted, sometimes withering, and reflected lived human experience. She wrote in her Shelby dissent, “Throwing out preclearance when it has worked and is continuing to work to stop discriminatory changes is like throwing away your umbrella in a rainstorm because you are not getting wet.”
Ginsburg, a steadfast supporter of reproductive rights and civil liberties, didn’t set out to be a dissenter. She preferred to build consensus and even maintained a warm friendship with conservative hero Chief Justice Antonin Scalia.
But the Supreme Court shifted ever rightward until Ginsburg became a leader of what is known as the liberal wing of the court. Questioning the reality of the rightward shift? Chief Justice John Roberts, with his well-established conservative ideology, has become the median justice on the court and is perhaps the most likely of the justices to be a swing vote.
If justice matters to you, that rightward shift should matter. So-called “liberal” concerns such as civil liberties are, at heart, about protecting the rights and dignity of the individual in the face of more powerful individuals and entities. Sometimes, that requires dissent. Dissent is forward-looking. Dissent is patriotic. Ruth Bader Ginsburg understood that.
“Dissents speak to a future age,” said Ginsburg in a 2002 interview. It’s not simply to say, ‘My colleagues are wrong and I would do it this way.’ But the greatest dissents do become court opinions and gradually over time their views become the dominant view. So that’s the dissenter’s hope: that they are writing not for today, but for tomorrow.”
Thank you, Justice Ginsburg, for the better tomorrows you created.