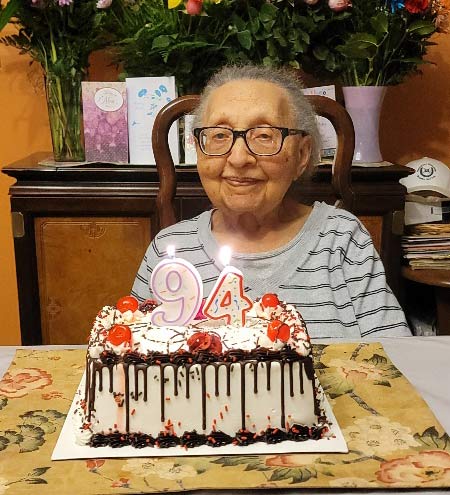 Dolores Marceline Syphax, age 94 of Brooklyn, New York, passed away on Monday July 25, 2022. She was born to the late Neil Gibson and Florence Bessie Brown Gibson on April 12, 1928. Dolores was the fifth of six children: Neil, Marcus, Edith, Anita, and Florence.
Dolores was born and raised in East New York, Brooklyn where she graduated from Franklin K. Lane HS. She excelled in Handball, Basketball, Track and Field where she received numerous medals. She proudly displayed her medals when competing with her children and eventually passed them down to them. Dolores was also quick to show that she could still sink a basket from the free throw line well into her 80’s, to prove she still had skills.

After graduating she began working for New York City Department of Welfare helping low-income families achieve a better life. During this time Dolores met her forever love, Robert L. Syphax, also from East NY. They were married on Sunday June 2, 1957. Through this marriage two wonderful children were born; Dolores E. and Robert J. whom they cherished dearly. Later she began working as a bank teller and finally found her calling at Bell Telephone Co. which eventually became Verizon. She worked until retirement in 1991 at age 63, when she and her late husband simultaneously retired, followed their dreams, and traveled the country without a care in the world. They both enjoyed bowling, boating, fishing, traveling, gardening, anything, and everything always side-by-side.

Dolores lost her love just one month shy of their 60th anniversary. She remained in the care of her loving son and his girlfriend Millie Soto until her love and the Lord called for her. She was preceded in death by her brothers Neil and Marcus, sisters Edith, Anita, and Florence. She leaves behind her children Dolores and Robert, her favorite son-in-law Randy, grandchildren Chance and Candace, a host of nieces and nephews, and numerous loved ones.
Submitted by The Syphax Family