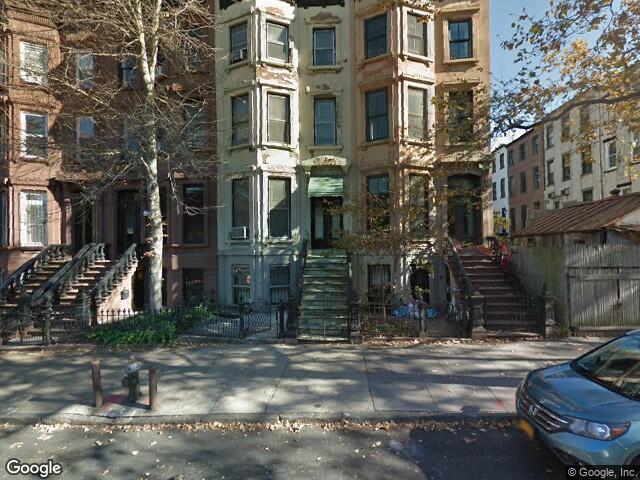 A beautiful brownstone in Prospect Heights, valued at over $2 million, was scheduled for sale at auction yesterday. But it was removed from the list, reported as having been sold on January 31st for $50,000. Before that, it was sold for $10,000. Neither sale was by either of the owners. The body of the woman who lived there was found in the vestibule a month after she died. Her mother’s body had been found in the same location 10 years before. Where’s a good private investigator when you need one? Anybody seen John Shaft?

The 1901 brownstone (which is actually white) at 591 Carlton Avenue, was last inhabited by Paula Sanford, who lived there since she was a child with her adoptive parent, Clarice Gray. Sanford passed away in February of 2017, 10 years after her mother. People would see her occasionally and exchange greetings, but she did not involve herself in any neighborhood activities.

Gray purchased the property in the mid ‘60s and left it to Sanford in her will, but her daughter never transferred the deed into her own name. Sanford had no children, siblings or other known living relatives when she died. This is where the city steps in with a district attorney working along with the public administrator to search for relatives. Public Administrator Richard Burkheit declined to comment when contacted. D.A. Naida Kalenborn, twice contacted by Our Time Press, first said an attorney would return our call, but the next day she would not comment nor identify whose lawyer it was that refused to return our call.

But Kalenborn was forthcoming with Keith Reid, who, though not with the press, is endeavoring to get to the bottom of this. Reid, an attorney and engineer, has lived around the corner from 591 Carlton for 30 years.

“When I called Naida Kalenborn on my findings as it relates to the forgery,” Reid said, “she knew that the record was forged. To me, that was a red flag, because I know when a property is in probate court, it normally sits there for four or five years. The City just doesn’t run around and start auctioning off a person’s property.”

Another longtime neighbor, Judith B., is concerned as well.

“In January 2018, I ran into a neighbor who said, ‘Oh, the house has been appraised for $2 million and they’re going to have an auction on April 11th.’ I said, ‘We can’t afford that, but we’ll go to the auction to see what happens.’ My son and his wife are looking for a house and would like to have stayed in the neighborhood.

“I think it was in February that I spoke to Keith Reid. He had been looking online and saw the house was sold in January for $50,000. You can’t even rent a hall room in this area for that kind of money! So it never reached auction because this deal was done prematurely. And with the few Blacks who are remaining, that’s the sort of thing that is happening to their properties. And we neighbors were sitting, waiting our turn to bid on the property.”

Documents show property rights to 591 Carlton were sold for $50,000 to 591 Carlton Corp., with the deed and other documents signed by “Yuval Goran, member.” A Loraine Gray, age 24 of Berbice, Guyana is depicted as having signed the document to sell the property.

Our Time Press contacted Goran for his side of the story and the call was returned just as we were going to press. We allowed him to have his say, but we will look further into his claims and give interested parties space to counter them, in a follow-up article.

Goran says he came across the property in a routine search, saw no claims had been made against it and began the purchasing process in December of 2017. He says he found birth and death certificates for Clarice Gray and her brother, Dr. Charles Gray, and found that Charles’ daughter Loraine was living in Guyana. When asked why he did not offer Loraine more than $50,000 for a home valued at more than $2M, Goran said that, “We also have other, different business going on with her.” He claimed this business would involve the Carlton property and other projects, and that Loraine wants to build a house in Guyana, and they will be doing that for her.

He also says that while he went through the court system, realtor Steven Stain initially claimed to have bought the property from Sanford in 2015, producing “fraudulent” documentation in early this year after Goran’s sale entered the public record. Goran maintains that his is the legitimate case, as he never claimed to have obtained the property from Sanford but through the Gray and Sanford estate.

Yuval Goran is listed as the owner of Bapaz Adaret Properties Corp. Newspaper reports say that in 2010, a blind and wheelchair-bound Evelyn Popalardo, 82, filed suit against her son Andrew for selling her $650,000 home for $6,000 to Golan. The son claimed Goran said if he did not sell, the family would lose the home if his mother entered a nursing home. The mother reported receiving not a penny from the sale and said Goran’s company attempted to sell the property back to her for $80,000.

Keith Reid would be interested to know this. “I think it was around Feb. of 2018 that the deed to 591 Carlton was forged on two separate occasions,” he said. “Whoever was involved in trying to find Paula Sanford’s family, they would have access to her records and realize that they were really no next of kin that was paying attention. The fact that the mother, Clarice Gray’s name was still on the deed, they had to fix that portion of it. That’s when they claimed they had discovered someone in a foreign country. So, for $50,000, they are trying to acquire a property that is valued at 2.5 to 2.7 million dollars. (Goran thinks the property is worth $1.5 million because it is a “shell building” that hasn’t been maintained for years.)

A bizarre twist is Paula Sanford being charged with first-degree manslaughter in the death of her 87-year-old mother in September, 2003. The medical examiner ruled the death a homicide. Sanford initially said she returned home to find her mother dead at the bottom of the stairs, but when interviewed again, she claimed she and her mother had argued and that Gray put her hand in Sanford’s face. The daughter says she grabbed Gray’s hand, but her mother pulled back and went tumbling backwards down the stairs. She said she called out to see if she was okay, and her mother said she was, and to, ’Just leave me alone!’

Sanford says she did just that. She left the home for five hours, returning to find her mother dead. That Sanford, a geriatric nurse, would walk past her mother to leave her lying alone, was a key argument for conviction. But the defense countered that New York State has no law that says a person – even a relative – must come to the aid of someone in distress. Sanford was said to have committed no crime and the charges were dismissed. It is odd indeed that the daughter would meet her own end inches away from where her mother died.

“I hadn’t seen Paula for a couple of weeks,” said Judith B. “And when I came home I saw police cars in front of her house and the morgue wagon came. Another neighbor said they found her dead between the two doors; apparently either she died when she entered or before she could leave, but she was between the two outer doors.”

Judith B., Keith Reid and other longtime homeowners want to see 591 Carlton either placed into the ownership of legitimate relatives or put up for public auction.

Miss Gray’s family should be able to work through the City of New York and make sure that the family is well-compensated for the hard work that their relatives have done in this country. I’m an advocate, as far as making sure that dark- and brown-skinned people are not being continually abused and being cheated out of what we have legally earned.”