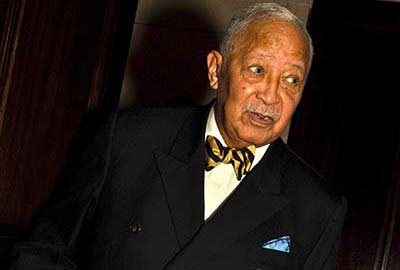 David Dinkins, New York City’s Gentleman Mayor (1990-1993), died Monday at the age of 93 from natural causes. He left a tremendous legacy of humanitarianism and an “indelible mark” on many, including young people like Elinor Tatum, publisher of the New York Amsterdam News, Karen St. Hilaire, author and Life Coach, former Governor David Paterson, the publisher of this newspaper who, at one point, lived across the hall from the Dinkins family on Riverside Drive.

Ms. St. Hilaire recalled in a CBS New York interview earlier this week when she, as a member of the Mayor’s Youth Advisory Council, met Dinkins during his time as Borough President of Manhattan. He would sit with the Council and listen to their comments on New York City issues. “I felt I was impacting politics at a young age. He was the original battery in my back to push me in to community service and politics.”
Paterson’s father, Basil, was one of the political power team known as the Gang of Four of which Dinkins, Congressman Charlie Rangel and businessman Percy Sutton, were members. “People talk about unrest and some of the conditions in the city now and they think about ‘those ’80s’, and they talk about Mayor Dinkins,” Paterson told a television reporter. “When he took office in 1990, the mortality rate was over 2,000 when he got there for six years. Within two years, he knocked it down 25% with his Safe Streets, Safe Cities Act,” Paterson recalled.

Ms. Tatum’s first job was working in 1985, at age 13, on Dinkins’ Manhattan borough president campaign. In an interview with The Gothamist, she recalled her experiences as a member of Dinkins’ Youth Advisory Board noting, “He actually took young people and listened to their voices and made us count.”

Dinkins was a mentor to many adolescent post college and established careerists who eyed public service. Martha Stark, a lawyer when Dinkins ran for mayor in 1990, inspired by Dinkins, left her job as a tax attorney in the private sector to go to work in the Department of Finance. She eventually became the finance commissioner for the Bloomberg administration.

“We are one city and it’s really quite a great one; (a city) that combines people from all walks of life and all backgrounds and we should figure out how we can all be in this together,” Starks said to The Gothamist. “That is especially true with COVID, (and) with us trying to figure out how to be an anti-racist city where Black and brown lives matter. We kind of owe it to David Dinkins to do our best.”