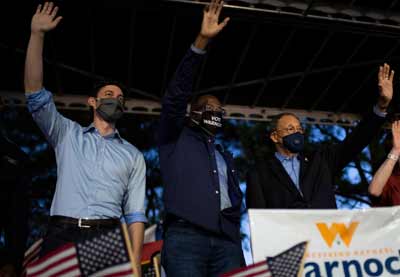 Jon Ossoff is a Georgia native, media executive, investigative journalist, and small business owner.
Jon and his wife Alisha, an OB/GYN physician, both grew up in Atlanta.
Since 2013, Jon has served as the CEO of Insight TWI, a now 30-year old media production company that investigates corruption, organized crime, and war crimes for international news organizations.

Investigative Journalist & Media Executive
In recent years, Jon’s company has successfully investigated and exposed sexual slavery of women and girls by ISIS, crooked judges, foreign officials who steal U.S-funded food and medical aid, contract killers, human traffickers, war crimes, and bribery.
Under Jon’s leadership, Insight TWI’s investigations of corruption, organized crime, and war crimes have won major awards and have been broadcast to hundreds of millions of people on dozens of television channels and on every continent.
Insight TWI’s work exposing ISIS war crimes has won particular acclaim. Their 2016 production for the BBC “Girls, Guns and ISIS,” was described by The Sun as “hard hitting and unflinching.” Their 2018 followup, “Face to Face with ISIS,” won the One World Media Award. The award jury called the production “exemplary of popular journalism at its bravest, most insightful and empathetic.”

Government Service
Jon earned his Bachelor of Science degree from Georgetown University’s School of Foreign Service and a Master’s of Science from the London School of Economics.
Before embarking upon his career in journalism and media production, Jon worked as a national security aide for Georgia Congressman Hank Johnson, handling defense, foreign affairs, intelligence, and economic policy.
In that capacity, Jon helped deliver constituent service and federal resources for our state, drafted legislative initiatives that passed both the House and Senate, investigated the mass surveillance of American citizens, worked to stop the spread of nuclear weapons, and helped root out corruption and abuse by federal contractors.
In 2012, Jon left Congress to pursue his career in investigative journalism, taking over as the CEO of a then-21-year-old, multi-Emmy award winning investigative television production company called Insight TWI.

Making History
In 2017, Jon was the Democratic nominee in the Special Election for Georgia’s Sixth District. He entered the race at 29 years old, six weeks after Republican Congressman Tom Price had been re-elected by 24%.
It became the biggest Congressional race in American history, which Jon narrowly lost by 3% after mobilizing the strongest Democratic Special Election turnout in over a decade, doubling youth turnout from the 2014 midterm, and producing the highest-ever turnout for a stand-alone House Special Election of all time.
With the endorsements of his mentor Congressman John Lewis, Congressman Hank Johnson, Georgia State Legislative Black Caucus Chair Rep. Karen Bennett, and dozens of other leaders from around Georgia, Ossoff is challenging Senator David Perdue in 2020.

Reverend Raphael Warnock grew up in Kayton Homes public housing in Savannah. The family was short on money, but long on faith, love and humor. Raphael and his eleven brothers and sisters were taught the meaning of hard work.
Reverend Warnock’s father was a veteran, a small businessman, and a preacher. He spent the week hauling old cars to the local steel yard, and on Sundays he preached at a local church. Reverend Warnock’s mother grew up in Waycross, where she spent summers picking tobacco and cotton, and still lives in Savannah today. She worked hard to raise Raphael and his siblings to know that they could do anything they put their mind to.
When he enrolled at Morehouse College, Reverend Warnock didn’t know how he would pay the full tuition. With the help of low-interest student loans and Pell Grants Raphael graduated, earned a Ph.D., and was ordained in the ministry. Fifteen years ago, he was chosen to serve as Senior Pastor at Ebenezer Baptist Church in Atlanta, the former pulpit of Reverend Dr. Martin Luther King, Jr. He was the youngest pastor selected to serve in that leadership role at the historic church.
Reverend Warnock believes his impact does not stop at the church door, and has been an advocate to expand health care coverage and to ensure hardworking Georgians can make a living wage.
As Senator, Reverend Warnock will bring to Washington the concerns of struggling Georgia families who wonder why no one is looking out for them. He will focus on fighting for quality, affordable health care, for the dignity of working people who are paid too little as our government works more for Wall Street, and to make sure every voice is heard.