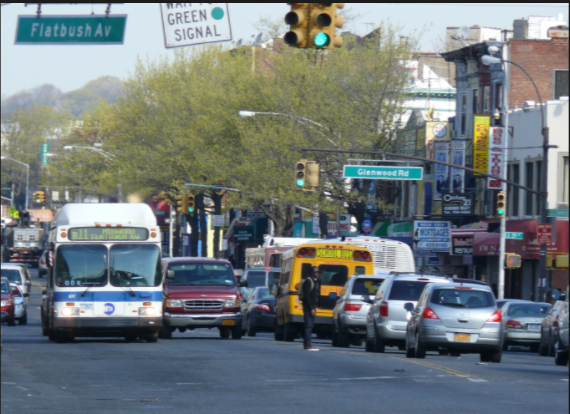 Every day, thousands of New Yorkers board commuter vans and buses to get to their destinations. The rides may be smooth or the rides may be nerve-racking. Most drivers play the radio for the passengers’ enjoyment, while others entertain passengers with the latest movies or music videos. For the most part, the drivers are men. Every now and then, passengers are greeted by a woman behind the wheel.

The drivers may be independent van owners or they are associated with a particular van line. In Brooklyn, the licensed van lines include Alexis Van Lines, Black Street Van Lines, Brooklyn Van Lines, Ace VIP Transportation and Royal Rose Transportation. Van lines in Queens specify the neighborhoods that are served. For example, Flushing is served, in part, by G & E Express, Inc. Jamaica is served by Ricketts’ Community Transportation Systems. Rosedale is served, in part, by Scarlet Girl Van Lines. Confidence Transportation serves Elmont. There are 54 TLC-licensed van lines that serve Brooklyn and Queens. There are at least two serving the Bronx, 12 serving Manhattan and four serving Staten Island.

Some issues that tarnish this industry are rogue commuter van drivers that aren’t licensed, commuter van drivers that are very lax in the upkeep of their vehicles, and reckless commuter van drivers. This industry turned a corner on January 25, 2017. In City Hall’s Blue Room, Mayor Bill de Blasio chaired a hearing on 14 pieces of legislation of which three, Int. No. 570-A, Int. No. 860-A and Int. No. 861-A, are classified as Commuter Van Reform Bills which deal squarely with more regulations for commuter van operations in the five boroughs. Those present to relish the moment were Leroy Morrison, owner of Alexis Van Lines; Winston Williams, owner of Black Street Van Lines; and Hector Ricketts, owner of Community Transportation Systems, Inc.

Mayor de Blasio informed the audience that the legislation would not be signed that day. “The City of New York has 30 days to have them signed or they will be executed into law automatically.” The mayor estimated “the signing occurring within two weeks”.

After reading the law classifications and numbers for the 14 pieces of legislation, the mayor moved into the hearing. Hector Ricketts was first to talk. His testimony addressed the need for the safety of the vehicles and the driving habits of van drivers. He also asserted, “The city will call commuter vans when we [New Yorkers] are in crisis. When it is over, you forget about us [van drivers]. Thanks to Nick Smith and his staff and the mayor and his staff for working with them to finally have the vans come out into the light”. Nick Smith is the Deputy Chief of Staff for CM Jumaane Williams, CD45. Smith is credited for finalizing the bills’ language. He worked closely on this project in order to gain traction for the bills and advocated for the bills within City Hall.

Following Ricketts was Leroy Morrison who said, “For years, it has been a situation of the city using commuter van lines when the MTA is on strike or there are floods or other bad weather conditions. But once the situation is resolved, we were put back in the shadows. But today is our day. Van lines are coming out of the dark and into the light finally”.

It is the offices of CM Jumaane Williams (CD45, Brooklyn), Chair of the Transportation Committee, and CM Daneek Miller (CD27, Queens) that penned the bills’ language and got them passed through the City Council. Int. No. 570-A “stops the practice of recording the requests for trips, services and passenger manifests”. Int. No. 860-A directs the “Taxi & Limousine Commission (TLC) to limit commuter van licenses to 735 unless an annual TLC study of van safety and public demand indicates otherwise”. Int. No. 861-A deals with the “penalties for operating an unlicensed commuter van: [Such] operation is punishable by a fine between $1,000 and $2,000 and/or up to 60 days of imprisonment. Minimum civil penalties would increase to the following intervals: $1,000 – $3,000 for the first offense; and $2,000 – $4,000 for subsequent offenses within two years”.

Another instrumental player in this legislative game is Phillip Hom, Special Counsel at Windels Marx. Hom’s specialties are ground transportation and government relations. He “prepares clients to comply with complex, legal and regulatory framework overseen by taxi and limousine regulators and public agencies”.

The sense of victory and accomplishment were apparent for Ricketts, Morrison and Williams. Hector Ricketts is called “the father of commuter vans”. He not only operates Community Transportation Systems, but is a consultant to motor coach, limousine, school bus and ambulette drivers. Winston Williams is a quiet leader, preferring to give the floor to more vocal advocates. Leroy Morrison is the consummate booster. This reporter met the three men while riding a commuter van the afternoon of the hearing. Morrison made other passengers aware of how vans were finally coming out of the dark and into the light of day. Possibly, the frequent reference to “the light of day” has to do with local authority getting active in stopping vans to check licenses.

Also present at the hearing was Alexis Van Line’s namesake. In 1997, Morrison shut down Pebbles Transportation to operate Alexis Van Lines. This business is named after his daughter Alexis. Alexis Morrison has not taken up the family business.