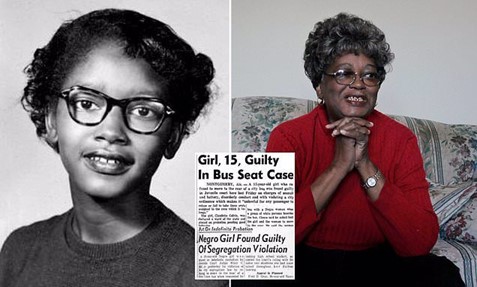 Last month, an Alabama family court judge granted Colvin’s motion to erase the 82-year-old civil rights pioneer record, clearing her name. On Nov. 24, Montgomery Court Judge Calvin Williams signed an order for her record to be obliterated, his office stated.
“My reason for doing it is I get a chance to tell my grandchildren, my great-grandchildren, what life was like living in segregated America, in segregated Montgomery,” the trailblazer told the Montgomery Advertiser. “The laws, the hardship, the intimidation that took place during those years and the reason why that day I took a stand and defied the segregated law.”

Colvin’s attorney Phillip Ensler told the PEOPLE that he’s very grateful that Claudette’s reputation has finally been vindicated after several decades.
“Our hope is that she is able to feel a sense of peace and relief. So many in Montgomery and those who believe in justice, freedom and equality throughout the world are moved by this monumental decision,” Ensler added.

Colvin was a 15-year-old student at Montgomery, Alabama’s Booker T. Washington High School in 1955. When she refused to give up her bus seat to a white person, police were called to arrest her. Her actions were inspired by Harriet Tubman and Sojourner Truth.

She earlier told PEOPLE, “I said, ‘I’m not getting up. It felt as though Harriet Tubman’s hands were pushing me down on one shoulder, and Sojourner Truth was pushing down on another. History had me glued to the seat.”
She’s made it clear that she’ll remain committed to her clamor for criminal justice reforms in the United States even after her historic victory.

“Double standards still exist in the judicial system,” she told the Montgomery Advisor. “One set of rules for African Americans, and another set of rules for Caucasians.”
Colvin was well aware that her actions may have startled some people at the time, but she was equally aware of their importance.

Photo top: Claudette Colvin is seen here as the15 year-old student who refused to give up her seat to a white passenger and was arrested, and now celebrates her 1955 record being expunged.
Photo right: Credit: Birmingham, Ala., Public Library Archives