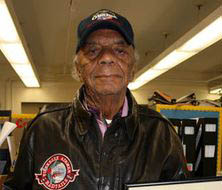 John Mulzac:  When we were young, we weren’t afraid of what we were doing.  Nobody was afraid of getting killed or dying or doing anything.  We were all getting training and we knew what we were doing.  If anything happened to us, it was because we did something stupid.  I’ll tell you one story that gave me confidence:  When I was in basic training at Tuskegee, I was about halfway through my training and I had a hard time solo.  For the first time, you go off and take the plane around and bring it back on your own.  Every other time you went with an instructor.

When I went to basic, we went to the big airplanes at the big field.  My instructor now is a white instructor.  I go up with him for 2 hours and he solos me in the new plane.  He was a fighter pilot; he had just come back from overseas.    He said, “John, I want you to go up and get about two hours of acrobatics in.  But get back here by 5 o’clock.”  He wanted to build up my time and build up his time.  So I said,  “okay.”  I go up and I practice slow rolls, spinning around.

I’m almost down to Montgomery, Alabama.  I turn around and this plane that I’m flying has gravity-fed gas tanks.   If you’re going upside down, the gas doesn’t get in the carburetor.  I’m practicing slow rolls and rolling all around.  I get on my back and, all of a sudden, I can’t move my stick.  My stick is way over in a corner.  It’s just stuck there.  The engine cuts out; everything gets quiet and all I hear is the air.  I’m falling upside down like a leaf coming down.  I’m hanging by my seat belt.  I open the hood-the canopy-and I loosen my headset because it’s connected to the air phones.

I’m getting ready to pull my safety belt and drop out.  I looked back to see what happened to the airplane and everything’s all right in the back, but then I look in the back seat.  The stick where the instructor sits in the back and his microphone cord had looped around my stick like a lasso and held my stick in the corner.  I couldn’t move it.  Remember, this thing is going fast.  I’m coming down thousands of feet at a time.  I tried pulling it, and I didn’t want to break my stick.  If I broke my stick, then I couldn’t do anything.  I’m pulling it and pulling radios out of the back.

Then I realized that I hit the high-lift rung and she comes back around and picks up; the engine starts up again.  Now I hook up my headset and everything and I call, “Mayday, Mayday, Mayday.”  I say that my controls are jammed.  So, right away, everybody comes up.
All the big white instructors come up into the tower and ask me what’s happening, and I explained to them what was happening.  Now I’m down to 2,000 feet.  I come from like 6 down to 2.  They say, “Well, bail out, bail out.”  I told them that I could bring it in.  He said, “bail out, bail out.”  I said, “No, I’m not going to bail out.”  So, I said that I would bring it in.  I keep using the rudders just to turn the plane around back toward the field.
The engines are running all right and everything, but my stick is way over there.  The stick is what controls the turning and the banking and moving the nose up and down.  All I have are rudders that can only go back and forth.

Finally, they realize that I’m not gonna bail out, and I’m bringing it back toward the field.  Now it’s after 5 o’clock.  I look down and here are the fire trucks and ambulances; everybody is out there.  They say that there’s gonna be a crash up there.

I put my head back in and I get lined up.  They’re talking to me and telling me what to do.  I line it up with the runway and as I get closer, I bring my throttle back and let the plane settle down.  I bring it down and I cut my power.

Then I reach on the side.  We have what they call a trim tab, a big wheel that when you have somebody in the back you have extra weight.  You can trim the airplane with nose-up or nose-down.  You don’t have the stick but you use the trim tab to compensate for your weight in the back.  I hit my wheel and I turn it back.  The nose went up and the airplane lands.  I started to get out but I said, “No, let me take it back to the ramp.”  I taxied it back to the ramp.  The mechanic jumps up on the wing and asks, “What happened, cadet what happened?”  I point to the back and show him all his radios and stuff.  By that time, the major, the colonel and the captain from the tower come down.

I’m standing up.  They walk past me.  They walk up on the ramp and they look in the airplane and they see what’s happened.  They come back down; they don’t say nothing to me-these are all whites-they walk right by me.  So I go back into the pilot’s room by myself.  My instructor is there, this white guy.   He said, “John, if that was me, I would’ve bailed out.”  I threw the parachute on the table and I told him that I quit.  I actually quit.  I said I’m not gonna do this anymore.  I started walking up the hill to my barracks to get all of my stuff.

My classmates come back marching up to our barracks in formation.  I’m up there starting to get my stuff and they didn’t know I had quit.  So they started asking me, “What happened”?   We had something to drink and I’m telling them the story.  They were so elated that one of us got in trouble and was able to come out of it safely.

So that night I thought in bed, “They don’t know I quit and one day I’m gonna be a private and they’re gonna be all pilots and lieutenants”.  Because of them, I’m not gonna quit; I’m gonna stay here for whatever I can do.  The next morning when I went down, my instructor saw me and he was so elated.  He took me up and let me do what I wanted.  He said, “I want to show you some new things to do.”  That got me going again.  I went on to basic and advanced without any more trouble.

It wasn’t until graduation day when they called my name to get my second lieutenant bars and my wings that the colonel stopped the whole graduation and told the story.  I was only halfway through my training.  He said,  “These are the kind of pilots that we want.”  The word was out that I was gonna graduate.  My instructor was sitting next to me and I asked him if he knew the word was out that I was gonna graduate.  He said, “Sure, John; the word was out that no matter what else you did, you were going to graduate.”  I asked him why he didn’t tell me.  He said he didn’t tell me because I would’ve goofed off all the time, and I wouldn’t study like I did.”

FDNY Remembers John Mulzac
John Mulzac was one of the original Tuskegee Airmen who distinguished himself, along with the other airmen in the now-famed segregated squadron. In 1947 he was appointed to the FDNY and rose to the rank of Lieutenant. His career with the Department ended with his retirement in 1967. During his time in the FDNY he was activated twice for military duty, first to be sent to the Korean Conflict and later to Vietnam. With 15,000 hours flying during his service from 1942 to 1983 in the US Army Air Corps, the US Air Force, the US Air Force Reserve and the New York Air National Guard, he attained the prestigious rank of Lieutenant Colonel.

U.S. Justice Department to End Investigation into the Lynching of Emmett Till