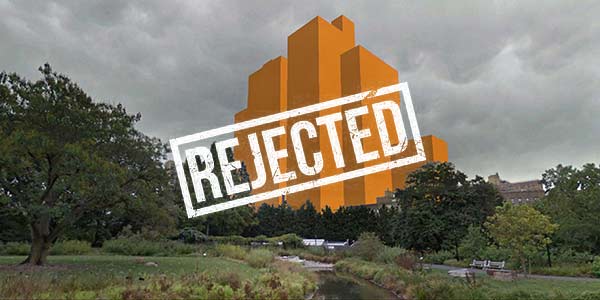 By Alicia Boyd, MTOPP
Today, the Crown Height/Flatbush Community has made history. For the first time in the known NYC world, a project that was certified by the City Planning Commission has been voted down by the efforts of a predominately Black low to moderate income community. The 960 Franklin Ave rezoning also known as the “Monster” had three consecutive nos. The Community Board, the Borough President and now the City Planning Commission. Currently there is a .01 percent chance of any application that has been certified by the Department of City Planning of being rejected because in realty once it is certified an application has a 99.9 percent chance of passing.

How did this happen? Well, it is a long story that started in 2014, when the residents of Community Board 9 in Brooklyn banded together and stopped a district wide rezoning (almost 50 blocks were being proposed to have increase heights from 3 to 4 stories to 30 to 50 stories). For the next six years, the city, Community Board members, local elected officials and developers tried all kinds of ways to get a rezoning passed in this community that would allow developers to build all along the parameter of Prospect Park and the Brooklyn Botanic Garden.

But the community stayed strong. We banded together believed in our power and pushed back. Not just in the political world but in the legal world. Residents came to the hearings, made donations, member of “MTOPP”, The Movement to Protect the People and “FLAC”, Flower Lovers Against Corruption FLAC organized and met every week.
WBAI raised its voice and kept us in the spot light, and we fought and fought and fought. We had a fair and honest Judge, Judge Boddie which we are thankful for.

We told folks our story, we educated our community on rezoning laws and political policies, we exposed corruption at the local Community Board level and at the Brooklyn Botanic Garden and we continued our Pro se (without a lawyer) litigation in court and in the end, it paid off!

The members of MTOPP and FLAC state clearly on the record, that we love our community. That we appreciate all the well wishes, the support, the encouragements, the thanks that we have gotten over the years. Our hearts are filled with joy, and we say thank you from the bottom of our hearts!

However, we also know this is not over. Developers do not take defeat easily and we know that corruption is continuing as we speak and breath, but it is nice to win a few battles to ensure that we the people remain faithful and optimistic that the people will is what matters!

National Grid Employees Give Back