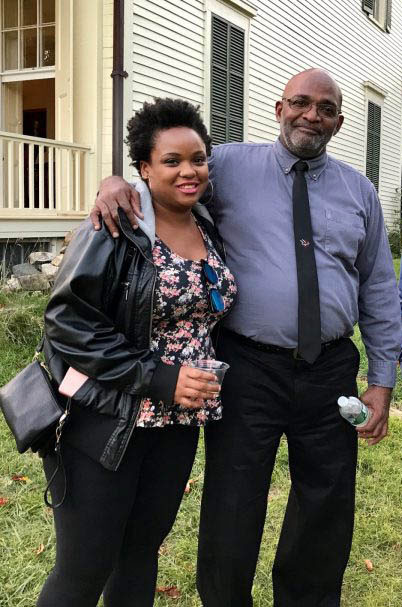 Westchester historian Dave Thomas, seen here with Kia Thomas, in a 2017 photo, is founder of the Friends of the African American Cemetery, the resting place of black individuals in Rye, New York for more than two centuries.

Our Time Press first learned of the existence of Rye’s historic African American Cemetery from Alfred Peterson Jr. AKA Baabasurya. The site on North Street, now a National Historic landmark, is where Peterson family members — notably Baaba’s mother and grandparents — are among the interred 300 individuals.  It opened officially in 1860, although it was a burial ground for people of color for many, many years before then.

“There are fifteen Civil War Veterans, one Spanish American War Veteran, five World War I Veterans and two World War II Veterans that we know of.  Each time we met at the site, another descendant would approach me with new information. It was these descendants, town employees and local officials, who were the first Friends of the African American Cemetery.
“Each year, I try to present research on those at this burial ground:The stories of everyday people and families, their lives and their deaths, what they meant to our community and the organizations they belonged to.

“ Over the years, we have discovered stories of wealth, poverty, disease, honor, sacrifice, love and family.  Many of those interred belonged to local churches, namely the Barry Avenue AME Zion Church in Mamaroneck and the Saint Frances AME Zion Church in Port Chester. The founder of Barry Avenue, Robert Purdy his wife and two of his children are interred at the site. Their descendants, Robinette Robinson and Surya Peterson, are current Friends. Through the years, they have provided stories and histories of other ancestors buried at the African American Cemetery.

“The goal of the Friends is to preserve the site, research the lives of those buried, and promote the educational value of the site. Over the years, several scouting projects have improved each aspect of our goal.  Daniel Vitagliano’s Eagle Scout project and Anna-Kay Smickle’s Silver Star project have documented the names and stories of some of the people. Brendan Ramos’ Eagle Star project cleaned every headstone at the site.  Each project has contributed to both new knowledge and maintenance.”
Learn more about the Friends on their Facebook: https://www.facebook.com/FOAAC/

Related Topics:david thomas
Up Next