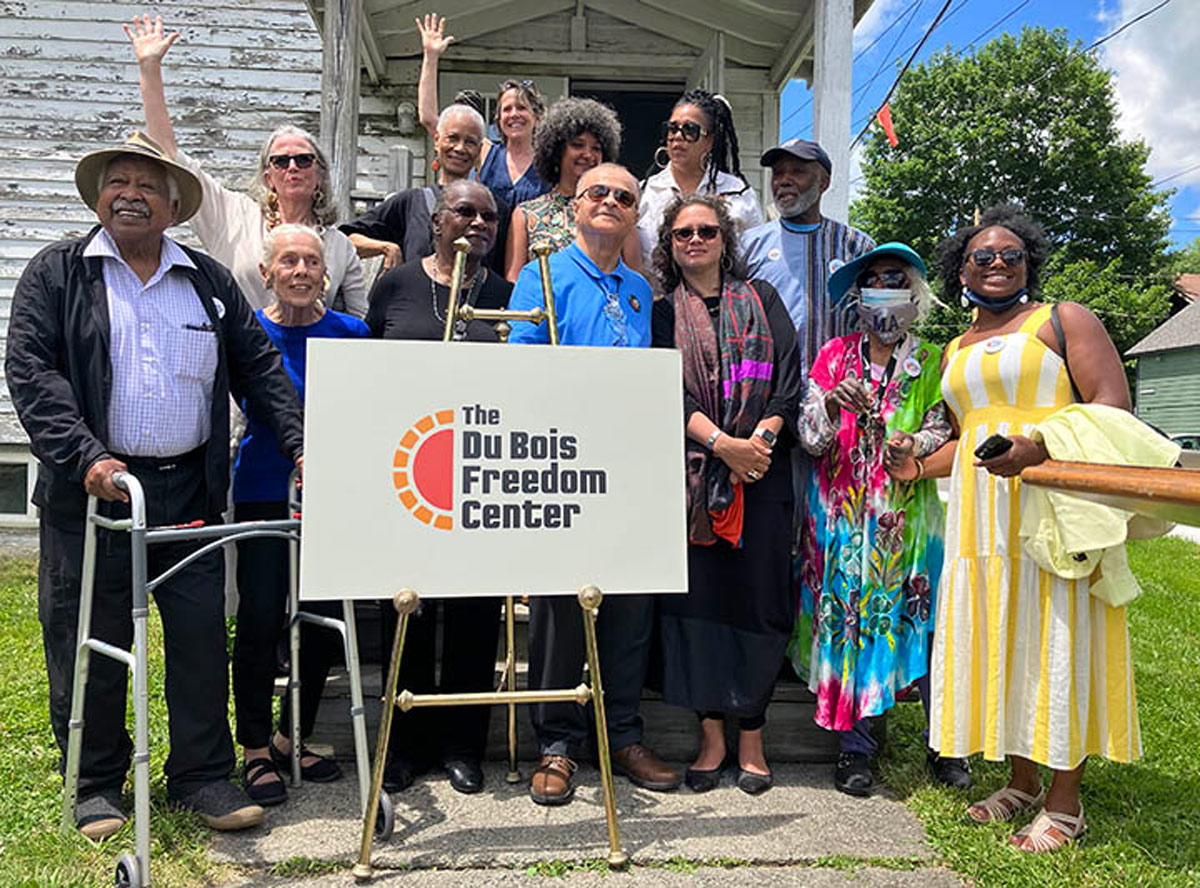 On Friday, June 10, members and friends of the Great Barrington, Mass. community, renowned scholars, authors, and other distinguished guests converged to celebrate the naming of the W. E. B. Du Bois Center for Freedom and Democracy.  Amidst a wave of tributes to the great scholar throughout Berkshire County, this acknowledgment is reportedly the first of its kind in the nation.

The mission of the Du Bois Freedom Center, as it will be known, is to educate the public about the life and legacy of civil rights pioneer W. E. B. Du Bois and the rich African American heritage of the Berkshires. Located in the former Clinton A. M. E. Zion Church in Great Barrington, where Du Bois was born and raised, this vibrant center of Black thought and remembrance constitutes the first museum and living memorial in North America dedicated to his life and legacy.

Formed in the late 1860s as the A. M. E. Zion Society, the Clinton Church was the first Black institution of Du Bois’ life. Although he left Great Barrington at age 17, Du Bois returned for visits throughout his life and spoke at the church on Elm Court in 1894. The Clinton Church Restoration also is restoring the historic site for adaptive reuse as an African American heritage site dedicated to educating the public about the Berkshires’ rich African American history. The former church served as the spiritual, cultural, and political hub of African American life in the southern Berkshire community for nearly 130 years.

“This is an historic announcement for our project and our town,” said Du Bois Freedom Center president Wray Gunn, Sr., whose father, David Gunn, was one of the Memorial Committee’s original incorporators. Gunn, who attended the Clinton A. M. E. Zion Church for more than 70 years and was a longtime trustee, is not only carrying on the work of his father but that of the late Rev. Esther Dozier, who worked tirelessly to promote Du Bois’ legacy. “W. E. B. Du Bois was one of the country’s foremost intellectuals and certainly the most consequential person to be born and raised in Great Barrington, yet his contributions have never been fully recognized. We hope we can count on continued support.”

“We could not have picked a better name that represents history and will automatically speak history just by the naming,” said Dennis Powell, president of the NAACP Berkshire County Chapter, to the Berkshire Eagle newspaper. Du Bois was one of the founders of the NAACP in 1909 and the founding editor of the Crisis Magazine, which heralded the Harlem Renaissance.
Over 75 people celebrated on the lawn of the building. One speaker was historian David Levering Lewis, whose two-volume Du Bois biography earned him two Pulitzer Prizes. Lewis, who serves as honorary chair of the Freedom Center’s National Advisory Council, noted that a Du Bois renaissance  is sweeping the area. “The Freedom Center presents a singular opportunity to reclaim and extend in Du Bois’ hometown, the Black intellectual, artistic traditions, and social movements to which he dedicated his life’s work,” Levering Lewis said in an earlier statement.

“An appropriate appreciation of Du Bois is long overdue, both nationally and locally,” added Dr. Lewis. While the Du Bois Freedom Center is a new entity, the project’s lineage dates to 1967 when Dr. Edmund W. Gordon and Walter White purchased Du Bois’ boyhood homesite on the outskirts of town. The following year, on Du Bois’ 100th birthday, they formed the W. E. B. Du Bois Memorial Committee “to honor his memory and to perpetuate and extend his work.” The site was dedicated as a memorial park in 1969 and is now a National Historic Landmark stewarded by UMass Amherst. Dr. Gordon, now 101, has endorsed the new Du Bois Freedom Center and pledged his support for the project.

Clinton Church Restoration has been awarded a $117,000 capital grant from MassDevelopment and the Mass Cultural Council, part of a round of Cultural Facilities Fund grants that were announced yesterday. The funds will be used to help complete architectural and engineering plans for the African American cultural heritage center the nonprofit is creating in downtown Great Barrington.

Community support and key partnerships — with the W. E. B. Du Bois Center at UMass Amherst, Housatonic Heritage and the Upper Housatonic Valley African American Heritage Trail, and now the African American Trail Project at Tufts University — have contributed to the project’s success to date. The organization has raised more than $2 million, completed an initial phase of stabilization work, and developed an interpretive plan and schematic-level designs for the Center, which is expected to take several more years to complete.

According to Eugenie Sills, the project’s interim executive director, the Cultural Facilities Fund grant is one of six grants the project has received in as many months. In March, the American Historical Association provided a $75,000 grant to support a one-year historian-in-residence position, research assistant, and public history programming.
Kendra Field, the Du Bois Freedom Center’s Historian-in-Residence, is an associate professor of history at Tufts University. She noted the gravity of what the Freedom Center means for understanding past and present in the Berkshires and beyond.

Field pointed out that the Berkshires and Great Barrington had historically been a site for Black refuge, culture and intellectual engagement. “Here we have the extraordinary opportunity to see up close the local roots of a national and indeed global story of Black life, culture and resistance.”

More information about the new Center is available at duboisfreedomcenter.org, which was launched on Friday, June 10th.