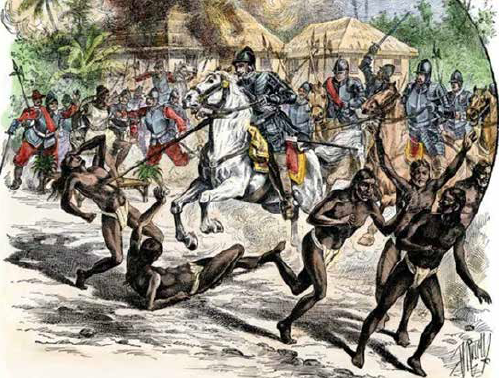 The second Monday in October, Columbus Day, is coming up. Italians all over America are gearing up for parades and festivities in honor of the great Italian explorer Christopher Columbus.

October 12, 1492: We’re looking at over 500 years of celebration and not once (to my knowledge) has anybody said…”Hey, wait a second. According to his diary, this guy was a real pig. It is true that history is written by people with emotional, ethnic and biological baggage. All sorts of baggage which can leave the reader with a somewhat skewed impression. I once had a history book that said that African slaves were happy in America because they had three pots and a cot. But a diary, a diary written just for himself, well, that’s a pretty good window as to a person’s thinking.

And Senor Columbus made no bones about it. He was a product of racism, capitalism and not to mention…me too ism.

His idea of a healthy situation was to subjugate people who were kind to him. The idea of cooperation never crossed his mind.

The Arawaks of the Bahamas and possibly Arawaks all over were known for being kind, gracious, hospitable and totally into sharing. Europe at that time thought sharing was for wusses. Money was king. Capitalism, the love of a profit, was strong; socialism, the love of a society sharing, was weak.

Look at this quote from Columbus’ handwritten diary:

“They … brought us parrots and balls of cotton and spears and many other things which they exchanged for the glass beads and hawks’ bells. They willingly traded everything they owned… They were well-built with good bodies and handsome features…. They do not bear arms, and do not know them, for I showed them a sword, they took it by the edge and cut themselves out of ignorance. They have no iron. Their spears are made of cane… They would make fine servants…. With fifty men we could subjugate them all and make them do whatever we want.”

This is a log in Columbus’ book. Howard Zinn quotes it in his book, “The Peoples History of the United States.”

Usually, the story is about how King Ferdinand and Queen Isabella gave Columbus three boats to go discover the New World, find a Western sea route to Asia and see just how flat the earth was. The fact that this journey was a bone-crushing failure is seldom discussed.

Although Columbus was aiming for Asia, he hit the Bahamas, then Cuba, then Trinidad, South America, Central America, Panama, many places…but not Asia and not what we call the good ole US of A today.

So, it is on the shores of the Bahamas that Columbus meets up with the kindly indigenous people. According to Zinn: “Arawak men and women, naked, tawny and full of wonder, emerged from their villages onto the island’s beaches and swam out to get a closer look at the strange big boat. When Columbus and his sailors came ashore, carrying swords, speaking oddly, the Arawaks ran to greet them, brought them food, water, gifts.”

So, what do you do when people are kind to you? You mistake it for weakness and enslave them. He sent hundreds of slaves back to Isabella. Those who stayed were controlled by violence and torture.

Another excerpt from Columbus’ log says: ” As soon as I arrived in the Indies, on the first island which I found, I took some of the natives by force in order that they might learn and might give me information of whatever there is in these parts. ”

The man was looking for gold “in these parts.” Asia was his destination and there was plenty of gold and spices, not to mention spaghetti, there. He knew that because Marco Polo brought back tons of it. If Polo could do it, so could he. El Wrongo. Polo went to Asia by land, not by sea. Columbus convinced the Spanish royalty that since the Turks made traveling to Asia by land impossible, sailing across the ocean to Asia would be a piece of cake.

Gold was the objective here. Spain needed it. Columbus promised to get it “by any means necessary.” Now here is the sad part, the native people may not have had horses or mules or swords, but they did have “golden earrings.”

Columbus saw those earrings, assumed that there were hidden gold mines that they didn’t tell him about, kidnapped them, made them prisoners until they gave up the source of the gold. Since they did not know, they were never released.

The man sold little native girls (nine to ten years old) to his crew for sexual slavery. Shamelessly, he wrote about it in his log: “A hundred castellanoes are as easily obtained for a woman as for a farm, and it is very general and there are plenty of dealers who go about looking for girls; those from nine to ten are now in demand.”

So far, we have a sailor who gets lost, makes innocent people slaves and pimps out little girls. What kind of man is this to celebrate, honor, revere?

Do the Mohawks in Brooklyn, the Shinnecocks in Long Island really think that Columbus was a hero? Does anybody who knows his history think he was a hero? Why are we going along with this myth?

Many cities have decided to replace Columbus Day with Indigenous Peoples Day. It would be cool to not celebrate it at all, but it is, after all, a paid vacation, none of us want to give that up.

Brooklynites are just as sensitive and intelligent as Los Angeleans. Why can’t we do that here? Mohawks and Shinnecocks have been here for over 5,000 years. Why isn’t their gift of sharing so that Europeans could survive, recognized?

(Abigail McGrath’s column is an homage to her mother, the Harlem Renaissance poet Helene Johnson [1906-1995], who, at 21, published her poem “Bottled” in Vanity Fair. Ms. Johnson wrote a poem a day for the rest of her life after her last published poems appeared in 1935. Ms. McGrath is the founder of The Renaissance House for Writers.)

THE SIGNIFICANCE OF MARCUS MOSIAH GARVEY