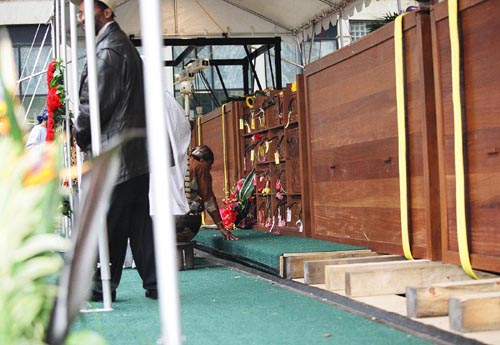 By Graham B. Weatherspoon

Our historians have informed us that tens of millions of our ancestors received their burial honors at sea, creating the infamous bridge of bones at the bottom of the Atlantic. Scientists now speak of cellular memory, passed through DNA, of all animals, including humans. Sharks still travel the waters of their ancestors, who followed the vessels which fed them living and dead captured Africans for a period of 300+ years. A few million Africans survived the journey and became the slaves of the Americas. Some of the strongest found themselves in a place named New Amsterdam. To you, it is Manhattan island.

Over the years I have attended meetings in City Hall and watched New York’s citizens engage in timed games of chess in City Hall Park. I moved in and out of the Surrogates Court and the old bank buildings on Reade and Duane Streets as well as 26 Federal Plaza and Foley Square. The present is literally built on the past, and that past could not have become so vivid for me until 1991, when I learned of New Amsterdam’s African Burial Ground, which predates the vast majority of immigrants venturing here to find new freedoms and riches. It is a cemetery long forgotten by those who have too often written everyone else’s history and erased truth. A history forgotten by a people who once held the oral tradition of great ancestors.

Craftsmen with pen in hand have stealthily over the years managed to deny the accomplishment of those who predated them, only to laud their own accomplishments as world-changing and -enhancing. Tablets had been removed, names erased, streets names changed and any evidence of the past gone forever – or so they thought. But as William Cullen Bryant once said, “A truth crushed to the earth shall rise again.”

A vigil and prayers for the dead were offered up in 1991 or 1992 by clerics of every possible religious order. They came from Asia, Africa, Europe, South America, Canada, within the borders of the U.S., and, of course, from the Native people of this continent. All to offer prayers over the thousands whose sacred rest had once again been disturbed. But unlike the past, the spirits themselves have cried out and been heard by one who would return sanctity to their rest.

As a member of the NYC Transit Police Guardians Association executive board, I, along with others on the council, served as security detail for the prayer vigil. I had already borne the caskets of coworkers on my shoulders, but this was quite different. It rained that afternoon, unlike any day I’d ever witnessed. Hundreds stood for hours in the rain as prayers were offered with the respect so often denied our people to this very day.

Following the prayers, the security detail was allowed into the site first. We carefully descended the muddy slope, maybe 30 feet into the cavity of earth. A huge white canvas tent covered the unearthed graves. A rectangular platform allowed us to stand on three sides as we viewed. What happened next shall forever stay in my heart. I knelt down and extended my hand into the earth, grasping whatever I could. As I looked around, I saw all the brothers who were with me doing the same. There were no words spoken prior to our descent, no plan, nothing. Some of us wept as we stood and realized that our presence had some spiritual emphasis.

In the subsequent hours, the attendees we cautiously lowered to the site were allowed to view the open graves.

To this day I still have the earth I held in my hand.

Twelve years later, on behalf of 100 Blacks in Law Enforcement Who Care, I responded to an e-mail from the Schomburg Library outlining the need for assistance regarding the return of ancestral remains to New York City.

October 3, 2003 greeted the 20 of us with blessed sunshine as we met at the Urban League offices at 120 Wall Street. Our assignment, as per Ms. Yancey, was to secure the VIP area on the river and escort these people to Duane Street during the procession. Ms. Yancey requested that I and six others accompany her to the pier. Unbeknownst to us, we and additional members would serve as pallbearers as the ancestors came ashore, to escort them to the site of the old Wall Street slave market.

I knew that our women were as needed as the men for the task. Women and men, boys and girls, were all buried, excavated and now returning. After all, they came by boat centuries ago and now return the same way. They came in obscurity long ago and return with pomp and ceremony, attended by kings and queens, diplomats and ambassadors, and the common man, awakening the sins of the fathers of this great nation.

I cannot help but notice the New Jersey State Police boats and the troopers bearing our ancestors remains. The same agency which practiced racial profiling had not one Black man present to hand over the remains. They still do not consider the consequences of their actions. As I reflect, it was all too fitting that they were present. Where it not for their forefathers we would not have been here anyway.

The four caskets, which carried only the full remains of a small boy and partial remains of an adult male, adult female and female child, were hand-carved in Africa’s Gold Coast along with the additional 400-plus caskets to be borne on horse-drawn wagons later in the day. Lorie Jones and Juvita Irving bore the first casket; Cliff Hollingsworth and I, the third. As I walked, tears came to my eyes for those who suffered and still suffer at the expense of power and man’s inhumanity.

Over the years I have met and worked for many notable people. Mariah, Don King, Iron Mike, Rev. Sharpton, Alton Maddox, Jessie Jackson, Ethel Waters, David Dinkins, Nelson Mandela, Magic Johnson, Rosa Parks, Sharpe James and so on, but none have touched me as this one whom I do not know by name or sight. It is only by our spirits.

Until we all meet again,