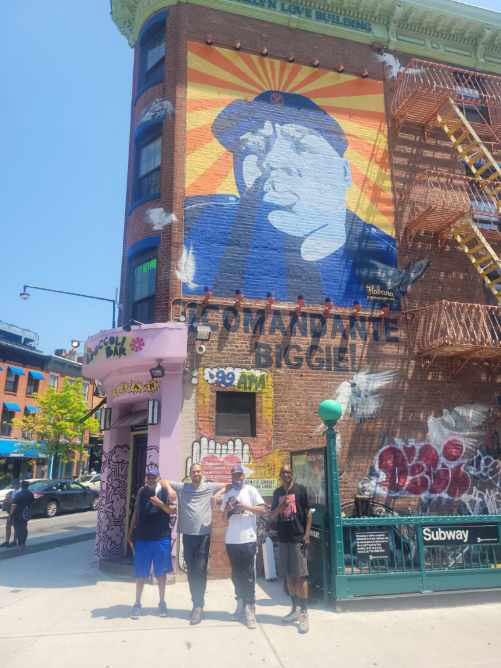 It felt like all of New York attended the late legend Biggie Small’s 50th birthday party on Saturday, May 21. Lines were queuing from the streets into subways for a special MetroCard issued by the MTA in his honor. The Empire State Building lit up like a monumental birthday candle saluting the music icon that Rolling Stone, Billboard and The Source have called “the greatest rapper.”

Family members, industry friends and notables attended the Empire’s two-day celebrations on Friday and Saturday. Hundreds of people — all ages- showed up on St. James Place and Fulton/Christopher ‘Notorious B.I.G.” Wallace Way to salute the late artist on the block where he grew up.  Roller skating, Double Dutch, dancing, hip hop performances and “juicy” Notorious beats–like his signature songs “Juicy” and “Big Poppa” – on a constant soundtrack. The celebration had the energy of a fabulous family reunion dedicated to Brooklyn’s Biggie with love.

Art was a major star at the St. James party, as fine artists from the metro area armed with charcoal, paints, pencils, and brushes converged on the block and took up their spots to create their personal interpretations of Biggie.

For those who were not able to attend the celebrations; get a MetroCard, or share in the experience of being on Biggie’s  block, the party is ongoing all year long … along Fulton Street with Biggie murals forming great backdrops for photos at the supermarket.  Mural locations near his home include, on the exterior of the supermarket at Fulton &t St. James where he bagged groceries as a youngster; across the street on the corner a few doors down from the Respect for Life barbershop where he had his hair cut; and the “Brooklyn Love Building” at Fulton and South Portland.  For other mural images and locations, visit: rockthebells.com/biggie-smalls.
(BG)

Biggie Smalls’ limited edition birthday MetroCard was like a collectible gift to 50,000 buyers. The iconic photo of the legend with the glistening golden jeweled crown titled on his forehead hit the secondary market with sellers. The Biggie commemorative card was being bought on eBay from $35 to $1,000. However, the biggest Biggie photo winner was acclaimed Brooklyn photographer Barron Claiborne, a protégé of Gordon Parks, St. Clair Bourne and Richard Avedon. The veteran Black photographer created the royal Biggie image for Rap Pages Magazine in 1997 when he purchased a $6 plastic crown shoot. Tragically, Biggie died days after the photo shoot. In 2020, Claiborne sold the iconic Biggie crown at Sotheby’s Hip Hop Auction for a phenomenal $594, 750! (FG)

Related Topics:biggie small
Up Next