Are You In?  Have You Been Counted?  Census 2020 Deadline is September 30
Advertisement 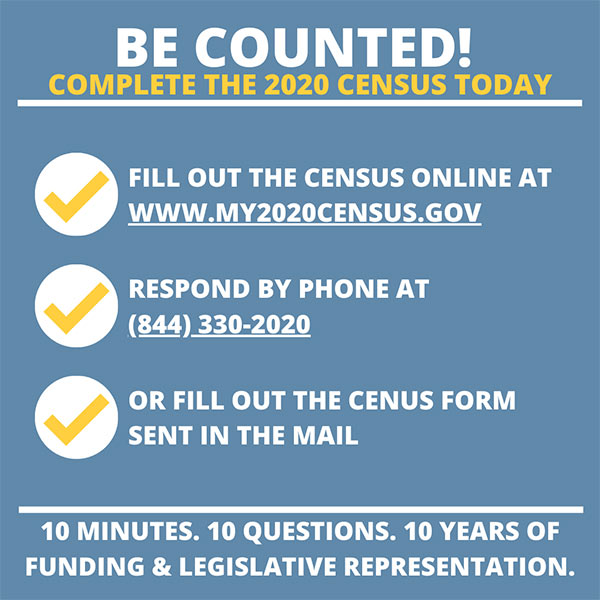 Mayor Bill DeBlasio’s  multi-borough “Countdown to our Future” kicked off a two-week campaign, September 17, to increase self-response rates and encourage New Yorkers to open up to door-to-door enumerators in New York City.  He is supported by City officials, elected officials, and major citywide community advocates and leaders who are mobilizing New Yorkers to obtain a complete census count.
And it wasn’t another press event. On September 17, Mayor de Blasio knocked on doors in BK to encourage New Yorkers to fill out the census.  His ongoing efforts are supported by leaders of diverse organizations all across the city, including here in Brooklyn, BP Adams — who is conducting his own massive 2020 Census campaign, and such other  respected local institutions as the Brooklyn NAACP and Medgar Evers College.
The census is important to all communities of color. The count determines the equitable distribution of $1.5 trillion in federal funds annually for education, healthcare, housing, transportation, infrastructure, and more, in addition to determining the number of seats each state is allotted in the House of Representatives, as well as the shape and size of local and state legislative districts.
DeBlasio’s latest effort comes at the heels of  President Trump’s sudden cutting of the census count drives by one month to depress responses among Black, Brown, and immigrant communities.
At noon on September 16, City officials held the kick-off at Foley Square in Manhattan. Then a group of advocates held a Census Walk for NYC, walking across the Brooklyn Bridge. Local leaders came together at Brooklyn Public Library’s Central Branch to issue a call to action to the Borough of Brooklyn, which currently has the lowest census self-response rates among the five Boroughs. At the Brooklyn-based press conference, Brooklyn Public Library unveiled new “Get Out the Count” banners across the facade of the Central Library Plaza, to give the importance of the 2020 Census visibility in a key area of Brooklyn, which currently has a self-response rate of 56.9%.
New York City continues to close the gap between the city and the nation in terms of census self-response rates. As of September 17, New York City’s self-response rate is 59.9%, and the nation’s is 66%. In 2010, there was approximately a 14-percentage-point gap between New York City’s census self-response rate and the nation’s. Currently, in 2020, there is a gap of just over six percentage points. A recent study found that New York City›s self-response rate increased the most out of any other city in the United States between May 4, 2020, and August 18, 2020.
“We have two weeks left to make Brooklyn and New York City count. The stakes could not be higher. An undercount will mean a loss of political representation and federal resources at a time when we can least afford it. I urge those who have not yet filled out their census forms to do so as soon as possible. It is an act of civic altruism to your neighbors and your community,” said Brooklyn Borough President Eric Adams.
“This is an emergency. Brooklyn not only stands to lose millions of dollars in resources but we also face the loss of political representation at decision making tables on the city, state and federal level. While the current administration is trying to undermine our efforts, we need to fight back and take action. The NAACP has joined other civil right organizations in taking this administration to court to extend the census count but we still have work to do here on the ground. This emergency requires us to show up and count our community so that we receive our fair share,” said L. Joy Williams, President of Brooklyn NAACP.
“This is the most important Census count of our lifetimes. We are up against a hostile administration that has signaled that it doesn’t want people of color and vulnerable communities to be counted–instead, the Census has been weaponized to prop up an image of America that no longer exists. It’s essential that we fight for our fair share of federal money and power by completing the Census. An undercount will jeopardize our neighborhoods, our children, our elders and our political representation for the next decade. It’s our collective responsibility to ensure an accurate count. Urge your friends and families, neighbors and church members to complete the Census. Those 10 simple census questions will help determine the course of our lives for the next 10 years,” said Lurie Daniel Favors, Esq., Center for Law and Social Justice at Medgar Evers College, CUNY.
“New Yorkers have been making extraordinary efforts to stand up for their communities, beat back unconstitutional orders, and do their part to help make sure we get our fair share,” Mayor de Blasio said last week. “Now, with  (a few days) days to go until the Census deadline, we need all hands on deck to make this final push to make every New Yorker count.”

Black Count:
In the last census, many majority Black neighborhoods, from The Bronx to Queens to Brooklyn, had census self-response rates that were 10 or more percentage points behind New York City’s average, meaning that these communities have been missing out on millions of dollars for critical services and the full political representation they are entitled to, from City Hall to the halls of Congress.
This year,  historically Black neighborhoods of Prospect-Lefferts Gardens (64.6%), Flatbush (63.5%), and Bedford-Stuyvesant (52.7%) now have higher self-response rates than they did in 2010. The same is true for Cambria Heights (65.9%) and St. Albans (57.5%) in Queens, and Baychester (54.2%) in The Bronx. In addition, there are certain heavily Black neighborhoods, such as Co-op City in The Bronx (74.8%) and Starrett City in Brooklyn (70.5%), that this year far outpace the citywide average (59.9%).
While these figures do represent a significant amount of successful education, organization, and mobilization, much more work needs to be done to ensure that these, and indeed all, our neighborhoods receive their share of representation and services.

The future is speaking – listen up!