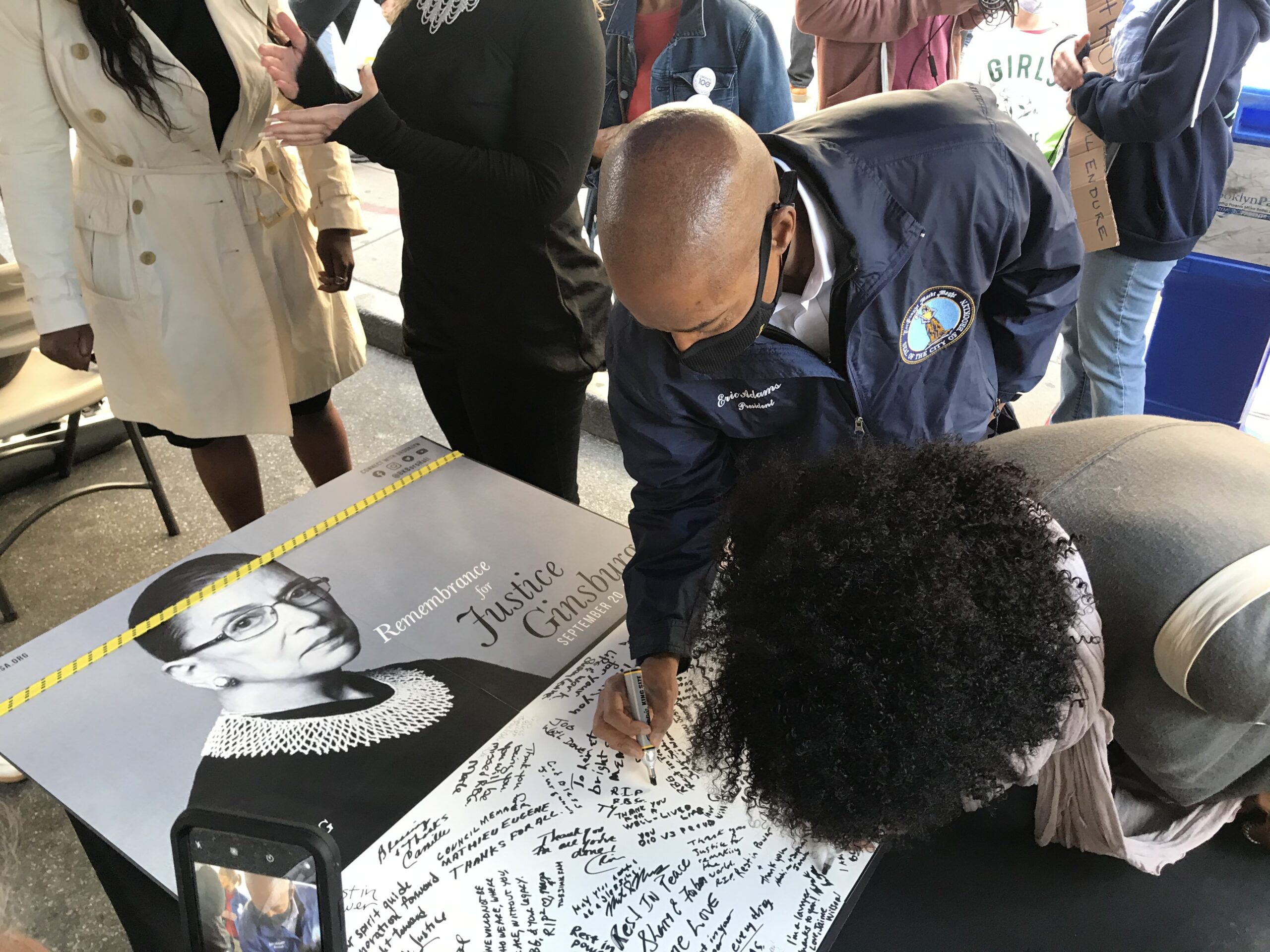 “Humanity is needed in all areas of America’s legal systems.  Ruth Bader Ginsburg, a justice of great intellectual jurisprudence, wisdom and fortitude, brought the qualities of kindness, compassion and empathy to bear in the highest court in the land.
“We have lost a champion of justice whose decisions effected positive change on the laws of our nation. We will miss her presence, but her legacy lives through the force of her good work and example.”
Darma V. Diaz
Democratic Nominee for 37 CD
and 54th AD District Leader

“Ruth Bader Ginsburg was a woman with a made-up mind about justice and equality. You could count on her to call it straight. She did not stutter nor speak with a forked tongue. Thoughtful in her deliberations and always aware of the human cost for a misstep. She was the conscious of the Surrogate Court and represented us with extraordinary dignity, intellect, discipline, caring and respect.
“Ruth Bader Ginsburg, You Endured! May you rest in peace. Your life was a blessing to Brooklyn!”
Annette Robinson
Former NYS Assemblywoman
56th District

“I found that the kind of tenacity and fearless she had was just so inspiring, especially in the last few years. I don’t know how she stood up, one illness and operation after another, never really saying she wanted to take a rest. Even from her hospital bed she would not abdicate her responsibility to make a decision, because she knew her voice was so important. For what she was doing, for how she was out there fearlessly fighting, she came to the attention of people like Jimmy Carter and also Bill Clinton, who appointed her to the Supreme Court. Once there, she never lost her focus.
It was never about politics or anything other than what she thought was right and was just for the people. No matter what the issue was, even if the majority — which was more conservative— saw it another way… No one ever would have thought that she was on the verge of dying, because her voice for justice was as strong at the end as it was when she was young.”
Judge Betty Staton
President, Brooklyn Legal Services

“Justice Ruth Bader Ginsburg was a fearless leader for women’s rights and civil rights. She was very much admired and her passing is terribly sad, especially in this tumultuous climate.
“Every judge stands on her shoulders. She had grit! But, of course — she’s from Brooklyn!
Judge Margarita Lopez-Torres
Brooklyn Surrogate Court

“Justice Ruth Bader Ginsburg has left an indelible mark on the Supreme Court.  Unfortunately, under the current administration the next nominee being rushed to replace Justice Ruth Bader Ginsburg, will not do her legacy justice, nor match the intellectual knowledge and fight for equality that Justice Ginsburg brought to the bench.
“One of Justice Ginsburg’s famous quotes that exemplified her work ethic, inasmuch as she had not missed an oral argument in the 25 years she presided on the Supreme Court, until she was recovering from her surgery is as follows:
“‘The greatest menace to freedom is an inert people.’
“Justice Ginsburg remained actively involved until the very end, and she will be remembered for a job well done!” Hon. Lisa S. Ottley,
Justice of the Supreme Court

“Justice Ruth Bader Ginsburg was a beacon for justice and the rule of law. She was not only a champion for the rights of the unseen and powerless people in our society. She was especially a champion for women. Although she was small in stature, she was an intellectual giant and never forgot her roots. And because she was such an accomplished jurist who took her job seriously, but didn’t take herself seriously, that allowed her to have that kind of spirit to revel in her new-found fame as the Notorious RBG!
“She did for the United States Supreme Court what the late Shirley Chisholm did for women in politics. She was viewed as a role model for so many young female lawyers and she will be missed tremendously by the legal world and legal profession.”
Judge Deborah A. Dowling
NYS Supreme Court Justice, Kings County

“It’s a tremendous loss to the country. She was a scholar and a common person. She had sympathy for people, she had empathy for people. I thought it was very funny that she was called, “The Notorious RBG” and when asked if she resented the connection with Biggie Smalls, she said, ‘Absolutely not, because we’re both born and bred in Brooklyn.’
“Her contribution to jurisprudence is tremendous! She was able to persuade people to think differently. The bench has been for many years, composed of men, and they don’t necessarily have the same interests that women do. She was able to speak to them in a way that they could see that there is inequality, and that they also had an interest in making sure that it was changed. This led to progress for not just women, but for people as a whole.”
Judge Ellen E. Edwards
Civil Court, Kings County

“Our hearts are heavy … with the passing of one of the most impactful justices to ever serve on the Supreme Court. From her time at the ACLU founding its Women’s Rights Project, to her 27 years serving on the highest court in the land, Justice Ruth Bader Ginsburg was a lifelong warrior in the fight to ensure justice and equality for all Americans.
“Justice Ginsburg’s remarkable legacy, her resolute dignity, her profound sense of justice, and her unwavering desire to do what is right will forever serve as inspiration for the very girls and women she spent her life fighting for. We must honor her legacy by standing firm in the beliefs she held on to until the very end.
“Rest in peace, Justice Ginsburg, and thank you for balancing the scales of justice day by day, case by case.”
Letitia James
Attorney General, New York State

“We mourn the loss of Justice Ruth Bader Ginsburg, a native daughter of the borough of Brooklyn and tireless public servant to the nation.
“She served with distinction the U.S. Supreme Court for 27 years and will be remembered as a dauntless champion for gender equality and Civil Rights.
“She will be sorely missed.”
Judge Paul Wooten
Appellate Division
New York Supreme Court

Whenever I meet a Brooklyn native who has struggled against the odds and made an impact on the global community, I think of A Tree Grows in Brooklyn. And that book came to mind
when I first met Judge Ruth Bader Ginsburg shortly after her “Notorious RBG” autobiography came out.
From the outpouring of condolences from around the world, this week, to her acceptance in the world of popular culture, it is apparent that  Brooklyn›s “Notorius” Ruth  is embraced around the world.
If we wish to honor her legacy, we should honor her strong solid-stance for Equal Justice for All.  We must work toward this goal as if our lives depend on it.  Because it does and it did for Judge Bader.

Our nation has lost an iconic jurist who served the judiciary with brilliance and tenacity beyond measure. The Judicial Council Division of the National Bar Association has lost a resilient trailblazer in the law and judiciary. As a lawyer, Justice Ginsburg was known for advocating for women and minorities and ultimately as a United States Supreme Court justice administering equal justice under law for all.
Justice Ginsburg has left a judicial legacy for us all with her poignant decisions and dissents reflective of her strong passion for gender equality and fairness as memorialized in her opinion, United States v. Virginia (1996) and her dissent, Ledbetter v. Goodyear Tire & Rubber Co. (2007).
Justice Ginsburg was unabashedly supportive of women and the National Bar Association’s judges and lawyers. Justice Ginsburg often witnessed the National Bar Association’s attorneys swearing in at the Supreme Court and afterwards graciously spent time speaking intimately with us and posing for pictures. She thought it not robbery but necessary to spend precious time with NBA members and shared graciously her pathway to the judiciary. The world has lost a humane giant in the judiciary.
I am grateful that I had an opportunity to meet Justice Ginsburg in 2014 when I was sworn in at the United States Supreme Court and will dedicate to her memory pictures of Justice Ginsburg with judges of the Judicial Council on our website. https://www.nbajudicialcouncil.org
Justice Ruth Bader Ginsburg rest in power and peace!
Hon. Cenceria P. Edwards
50th Chair, Judicial Council Division, National Bar Association

ILLUSTRATION: Philip Bannister, based on a photo in ‘time’ credited to Steve Petteway – Collection of the Supreme Court of the United States