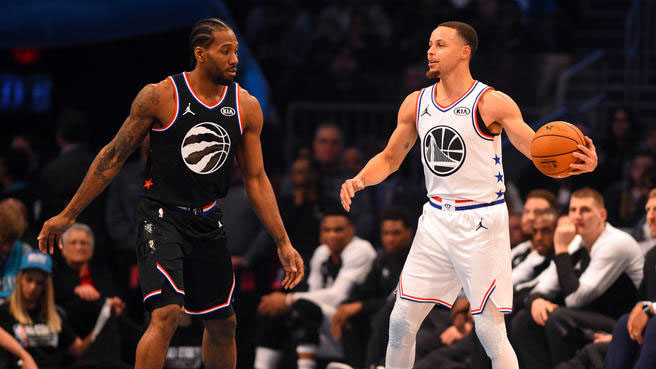 After a grueling 82-game season and three rounds of thrilling playoff action in the books, the NBA Finals are here! It will feature a familiar face who is looking to rewrite history and another squad looking to create franchise history. Tonight, in Toronto, it will be the Golden State Warriors vs. the Toronto Raptors. How did they get there? Well for the Raptors, in the first round of the playoffs, they took care of business by defeating the Orlando Magic, then defeating the Philadelphia 76ers in one of the most exciting Game 7 finishes basketball fans will ever see. Then after dealing with some adversity in the Eastern Conference after losing the first two games to the Milwaukee Bucks, the Raptors, along with their star player Kawhi Leonard, stormed back to win four straight and punching their ticket to their first NBA Finals appearance.

As for the Golden State Warriors, you know the team that just seems to find a way to win, they are on the verge of becoming the first team to win three straight NBA Championships since the Lakers team in the 2000s. The Warriors were the No. 1 seed in the Western Conference. They defeated the Utah Jazz in the first round, a tough Houston Rockets team in the second round and easily swept the Portland Trailblazers in the Western Finals, making it five straight trips to the Finals.

It is definitely an exciting time in Canada and it almost seems as if this season could very well convince Kawhi, who is a free agent after the season, to stay, and I think music recording artist and Canadian native Drake will have his say for sure. The Raptors won 58 games this season, one more game than the Warriors to get the home court in the series. For the Warriors, part of their playoff run they have simply taken out the playbook from 2016 and have executed with perfection after losing DeMarcus Cousins and Kevin Durant late in the series against the Rockets. Last I checked, the Warriors still have Steph Curry and he loves playing against the Raptors. In 17 career games when Curry has played, the Warriors have a win-loss record of 15-2 and Curry averages 28.2 points per game, the most against any other team. These two teams squared off twice this season with both on each other’s opposing home courts with the Warriors winning both games. However, both games were played before the calendar season hit 2019. It will be two different teams once the ball goes up in the air tonight for Game 1.

Sports Notes: (Baseball) Despite the Yankees having a league-high 17 players on the injured list, the team’s depth has shown great grit in filling out spots for the big-name players who are out. The depth of the team has got the Yankees in first place in the American League East Division. Who is the team’s MVP in the first half of the season? E-mail me at Castroeddie714@gmail.com and let’s have the conversation!

The Kunta Kinte Shirt, The Gestapo-Inspired Workout and Why I’m Done with All of It

The State of the Knicks