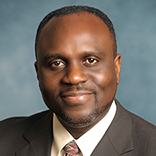 Gregory Calliste, new CEO of Woodhull Medical and Mental Health Center (Woodhull), has been making his rounds within Woodhull’s service area to introduce himself and impress the point that “Woodhull should be your choice”.

Calliste’s appointment became effective April 11, 2016.  He was the acting CEO for North Central Bronx Hospital prior to coming to Woodhull.  He holds a Master of Science in Public Health from Columbia University and a MBA from the New York Institute of Technology.  His predecessor at Woodhull is George Proctor, who retired from NYC Health + Hospitals after 33 years of service.

He said, “Woodhull is one of the best-kept secrets in Brooklyn and one of the best-performing hospitals in the City of New York.”  Though not stating his source, Calliste affirmed “all of the organizations that rate hospitals give Woodhull between A’s and B’s”.  Some sources would counter the assertion.

Woodhull’s Spring 2016 safety score from HospitalSafetyScore.org is “B”.  This website is created and administered by The Leapfrog Group, which is an independent, nonprofit “committed to driving quality, safety and transparency in the U.S. health system”.  This B is comprised of the average score from MRSA infection (0.188 above average), C. diff infection (0.743 above average), Infection in the Blood during ICU stay (1.148 below average), Infection in the Urinary Tract during ICU stay (1.352 below average) and Surgical Site Infection after colon surgery (not available).

US News and World Report’s 2015-16 Analysis of Hospitals uses the “high-performing”, “average” and “below average” rating system.  This annual ranking is done in July and uses statistics from the American Hospital Association’s Annual Survey Database.

Woodhull’s specialty is in the treatment of Nephrology.  The hospital’s performance in this area is 41.8/100.  “Its reputation with other doctors in this specialty as surveyed in 2013, 2014 and 2015 named as best is 0.0%.  However, its rating for Patient Survival 30 Days after admission is 7/10, or better than expected, and 5/5, or high in Patient Safety.”

These middling scores can be attributed to insufficient nursing staff and lack of advance technologies, “0.8 and 1/7”, respectively.

However, Lynn Schulman, Senior Associate Executive Director of Woodhull’s Business Affairs unit, substantiates Calliste’s assertions by pointing to the medical center’s full accreditation by the Joint Commission; its receipt of the 2016 Health Grades Patient Safety Award and Gold Plus status for the American Heart Association’s Get With the Guidelines Heart Failure Program.  Schulman includes receipt of the Health Equality Index for equitable care of LGBT patients and their families as an important milestone.

A statement within Calliste’s short address at CB3’s June 2016 general meeting that pricked some ears is, “As the community changes, we want to make sure Woodhull improves so people don’t have to leave Brooklyn and go all the way to New York”.

“What Mr. Calliste was referring to was that as the community changes, it is the hospital’s responsibility to assess the health care needs of the community on a regular basis and offer the services that address those needs so individuals can lead their healthiest lives,” explained Ms. Schulman.

To its credit, Woodhull serves its wide service area not only from the medical and mental health center at 760 Broadway, it has the Cumberland Diagnostic and Treatment Center, four community health centers, six child health clinics and two school-based health centers.  It is affiliated with Langone Medical Center and these associated facilities provide services six days out of the week.

Soon to open is affordable and supportive housing located at 179 Throop Avenue in Bedford-Stuyvesant.  This construction project is a six-story ADA compliant residential building containing 89 studios, 53 units are designated for recently released psychiatric patients and 36 units for tenants making 60% of the Area Median Income (AMI), or $36,300 for a single person.  The monthly rent for the units is $907. Community-based health and housing provider Comunilife will provide on-site services.

While Woodhull’s rating as one of the best hospitals in Brooklyn is debatable, getting “good” ratings is honorable.  It is the status that gives room for improvement while receiving commendations for service.  Perhaps, Gregory Calliste, COO-turned-acting-CEO at North Central Bronx Hospital, will work to continuously improve the quality of care for all residents in the catchment area regardless of socioeconomic status.

Scenes of a Crime:  On Kingston Avenue, a Justice Rally for Chanel Petro-Nixon