Scenes of a Crime:  On Kingston Avenue, a Justice Rally for Chanel Petro-Nixon
Advertisement 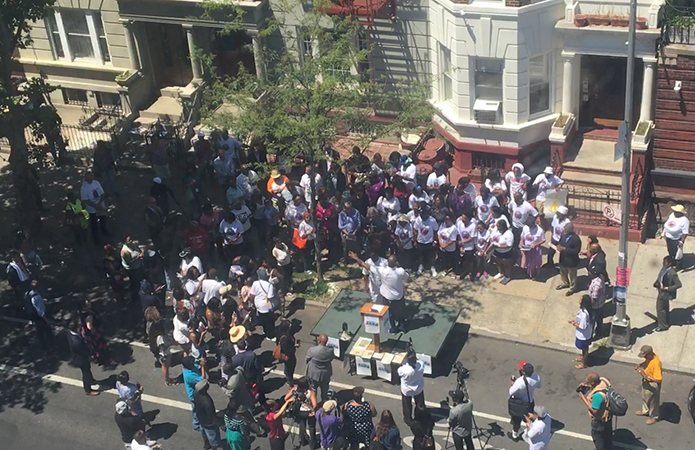 Television detective dramas usually start with a glimpse of a scene of the crime, followed by the sordid criminal action; the perps are usually off-screen. So viewers of such popular shows like “Law and Order” and the “NCI” series are very much aware that scenes and settings share starring roles with the actors who inhabit a script’s protagonists.

But in the case of the 2006 murder of teenager Chanel Petro-Nixon in Bedford-Stuyvesant, for the

NYPD, Kings County District Attorney’s Office and other law and justice enforcers, the “scenes” now extend from a 10-block radius to the Caribbean’s St. Vincent and the Grenadines, thousands of miles away.  A former Brooklyn

resident, currently imprisoned there for an unrelated crime, the suspect has been indicted by Ken Thompson’s office.  His extradition to the U.S. is being sought.

Thompson held the announcement on Wednesday, June 15 in Restoration Plaza, a few feet from Applebee’s Restaurant where on Father’s Day in 2006, the Boys & Girls H.S. honors student informed her family she was headed to drop off a job application at the dining spot.  She went missing until some four days later, her body was discovered in a garbage bag in front of 212 Kingston Avenue, between Sterling and Park Place.

A Justice Rally and Prayer Vigil organized by the Brooklyn Anti-Violence Coalition, under the leadership of The Rev. Taharka Robinson, was held last Saturday at the Crown Heights site where she was found.  The rally, attended by community members, elected officials and activists and family from as far away as Ft. Lauderdale and Orlando, honored the murdered teen.

NY1’s own Errol Louis, who has kept Chanel alive in community and national media, spoke at the event.  The reporter broke the story for community-

based media in his column for Our Time Press 10 years ago.  Last April, he discussed the unsolved murder on NY1 with the teenager’s mother, Lucita Petro-Nixon, and Rev. Robinson of the Brooklyn Anti-Violence Coalition.  At the rally, he said that the community should be united in times of tragedy. “What holds this community together is faith and friendship and family,” he said. “And that’s really all we have.”

Born in 1989 in Bedford-Stuyvesant, Chanel Petro-Nixon was a member of the Mt. of Olives Seventh-day Adventist Church on Bushwick Avenue.  She was an 11th-grader at Boys and Girls High School, where she was known as a straight-A student who spent her after-school hours in the library.  Her friends called her a nerd. It is reported she wanted to become a nurse.  At the rally, Rev. Robinson told Our Time Press, “At this time, she would have been 26, and living her dream”.

For The Rev. Robinson, who organized Saturday’s rally, the story of Chanel Petro-Nixon has to move beyond the 212 Kingston Avenue address where

the bag was dropped, beyond her achievements at Boys & Girls H.S.  It has to move on from the Caribbean islands where her alleged murderer, for the moment, is imprisoned.  It has to move beyond the Rosedale and Rosehill Cemetery in New Jersey where she is buried.  And all of the other places she may have been that fateful day.  It has to move beyond a rally to solve the circumstances surrounding her death to the legacy that can be attributed to her life.

“We try our best to keep (the case) alive.  We … don’t want her death to be in vain,” quoted Lucita Petro-Nixon in the New York Times several years ago.

Over the years, combined rewards leading to the arrest and conviction of her killer(s) have reached close to, and now perhaps, more than $100,000 – with former Mayor Bloomberg and The Rev. Al Sharpton included in the list of donors.

The NYPD has contributed tens of thousands of hours on the case which took “them all over the tristate area and beyond”, according to one police official back in 2006. They asked about the white 6 ½ Nike Air Jordan Retro 14 sneakers with pink trim she wore when she was last seen by family members.  And the Sanyo Spring 8200 phone.  These items were missing when she was found.

Anyone with information pertaining to this case should please call Crime Stoppers at (800) 577-TIPS.