What’s In A Name?
Advertisement 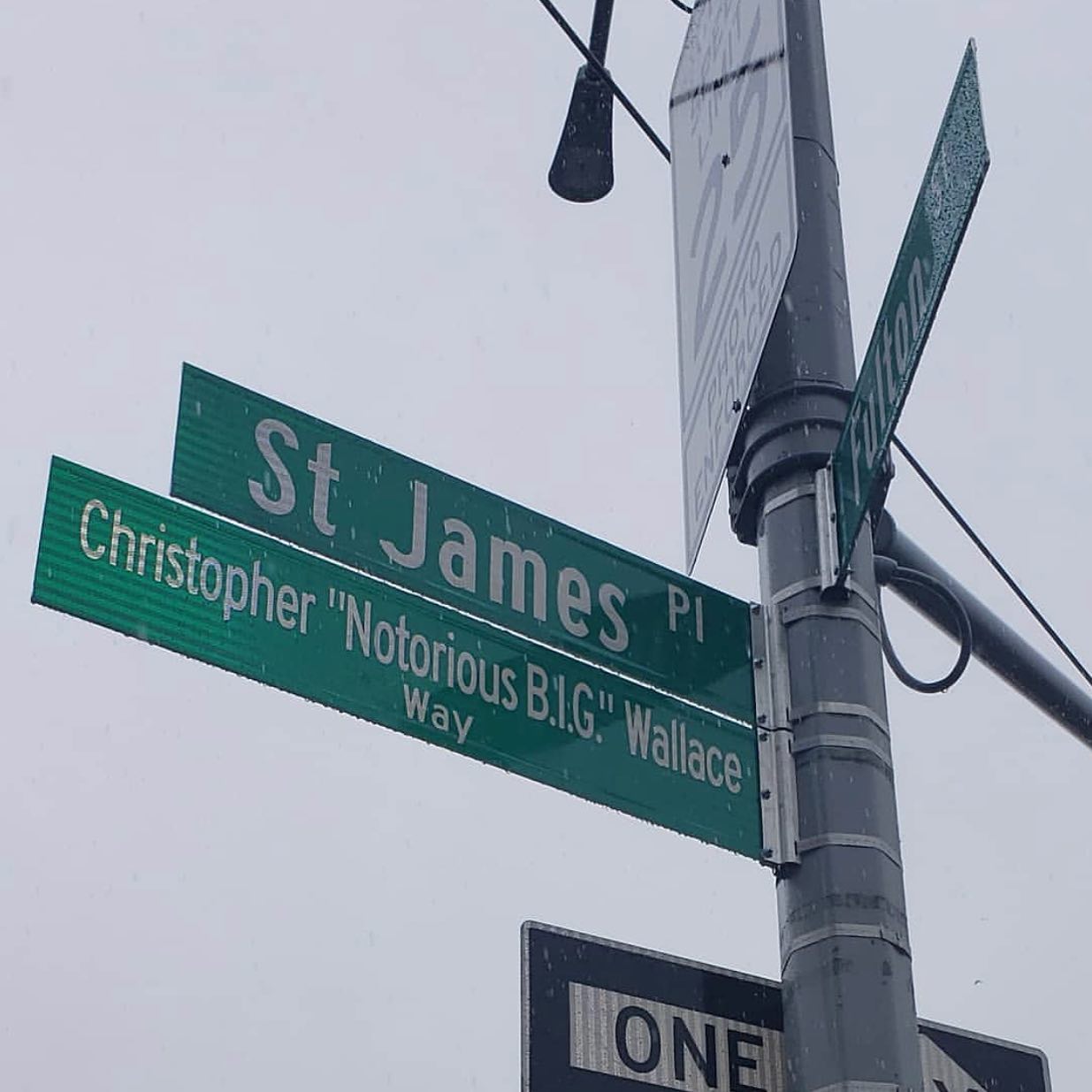 Earlier this week, St. James Place between Fulton and Gates was given a name change. It is now Christopher Wallace Way. Hundreds of family, friends, business associates, politicians and just folks from the neighborhood that Christopher Wallace called home gathered in the pouring rain on Monday to pay tribute to his life, and to celebrate the naming of the block where he was raised.

Christopher Wallace, better known by The Notorious B.I.G., or Biggie Smalls, was a supremely talented lyricist whose life was cut short on March 9, 1997. In life, Big went from a neighborhood kid to an international music star all while living at 226 St. James Place. Using our neighborhood as his milieu, Christopher created songs that inspired an entire genre of music. He wrote feel good songs that spoke to his concerns of survival, so while you danced you were being educated on the fears and aspirations of a young black man. He wrote car bangers that were eloquently structured even while discussing the most violent and savage of acts, so when you drove through the hood his words made the younger generation nod their heads even as the older generation were disgusted by what they heard. His talent with rhythm and wordplay was as obvious as the chaos that he drew inspiration from. He spoke about robberies, and drug dealing, and murder, and kidnapping and even in those words the listener could still recognize the beautiful sun through those clouds of discord.

Indeed, it is confusing being a Black man in America. Our ultimate hope ever since before the rise of the Antebellum South has always been to survive and to transcend oppression, the problem is that a lot of times we’ve reconciled with ourselves the need to use the tools of oppression to create that survival. If you’re in a prison cell and you want to escape it’s only natural that you start the process by utilizing the tools that are with you in that cell. So, we constantly have to fight this juxtaposition of survival and chaos, making attempts to level up while learning through the process the ramifications of our decisions, and having to live with them. This is what you hear when you read Langston Hughes or Donald Goines. Yes, Hughes was more eloquent than stark, and Goines was more stark than eloquent, but they are both discussing the same concepts. What happens to a dream deferred? Hughes implied the results. Goines took you into the back room and let you sit next to the results. In his life’s work, Christopher Wallace also addressed this juxtaposition. For example, when he said, “I made a change from a common thief, to up close and personal with Robin Leach. And, I’m far from cheap. I smoke skunk with my peeps all day, spread love it’s the Brooklyn Way” he was exposing you to his blueprint for transcending oppression. He made a change, that change created a life that transcended the oppressive state he was raised in, but he uses his new life to show love to others who might not have been able to yet make that change. And, he says that doing so is the Brooklyn way, spreading love as a tool for survival. Neither Hughes nor Goines could’ve said it any better.

The importance of Christopher Wallace Way is not unlike the scores of stories surrounding the various paths that Black men have had to take in order to find themselves and their place in a society that has continuously maintained a warped and twisted fetish regarding both our creative and our natural lives. His story is like Malcolm X, and James Baldwin, and Sean Bell, and Travon Martin, and Muhammed Ali, and Spike Lee, and Eric Garner and Jimi Hendrix too. How can I survive and transcend by any means? And, if I don’t make it, how will my life speak for me? I asked a teenager a couple of weeks ago what his biggest fear was. He answered that his biggest fear was dying before he could reach his goals. I hugged him after we talked, because I could relate to his fears. Unless you’ve experienced living as a Black child under the climate of poverty and rage and chaos, you might not understand.

One day there will be a young black child walking down Fulton Street. He or she will be a child trapped in the chaos of poverty and oppression. They will get to the corner of Fulton and Christopher Wallace Way, and they will look up at the name of the block and be instantly reminded that they too can transcend, just as Christopher did. Surely, having his name raised to this honor will spread more love than hate. And, he said it himself that spreading love is the Brooklyn way.