News around the Web What's Going On 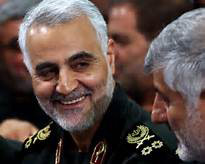 2020 COMMON ERA
A week ago, many observed Christmas, Hanukkah (the Festival of Lights) and Kwanzaa, all celebrations of the human spirit and to men of peace. New Year’s Day 2020 arrives with acts of hostility in the Middle East as Iran ponders its options in response to President Trump’s nod to an American drone strike in Iraq which killed Iranian Major General Qassem Soleimani, arguably his country’s second-most powerful figure. Did the impeachment motivate Trump’s action as a distraction? Why order a Soleimani hit in Iraq where many American troops are deployed and vulnerable? Does the White House understand geopolitics and unintended consequences of its belligerent actions?


The following are some responses to last week’s US assassination. Iraq, itself the subject of a 2003 US-led invasion, has requested an American personnel exit. On January 7, Iran fired ballistic missiles on US bases in Iraq. Iran has terminated its nuclear agreements and has threatened in-kind horrors to the US and its allies for the Soleimani assassination. The US responded to the Iranian threat with comparable aggression, including destruction of its cultural sites. The situation is hot as Hades and discomforting. No one foretold world’s end by 2020, something related to human error and strategic miscalculation. There must be light at the end of the tunnel which opened in a dark space. Neither Iran nor the USA see war as a solution to Soleimani’s death.
Life must go on, the Middle Eastern horror show notwithstanding. The 2020 calendar is rife with less bellicose events, like the US presidential, congressional, city and state elections in the 50 states. The 2020 NYS Legislature and the governor’s office, both Democratic dominated, will not be stress averse. They will have to revisit some of the 2019 NYS progressive laws like Bail Elimination, the omnibus Tenant Protections Act and how to pay for the same without tax increases. Is the Albany Democratic honeymoon threesome – Governor Andrew Cuomo, Assembly Speaker Carl Heastie and Senate Majority Leader Andrea Stewart-Cousins – over? Oh, I forgot. Japan hosts the 2020 Olympics.

WHAT’S GOING ON: PUERTO RICO, the Caribbean-based US island territory experienced a series of earthquake tremors which began last Thursday, January 2, culminating on January 7 when the island was struck by a 6.4-magnitude earthquake in the morning, followed by an 6.0 aftershock a few hours later. Weeklong earthquakes have caused extensive damage to an island where power outages are commonplace.

PENNSYLVANIA: Philadelphia Mayor Jim Kenney named Danielle Outlaw, 43, to serve as the next Commissioner of the Philadelphia Police Department, a first for a Black woman. The Philly Police Department includes 6,500 members and is scandal-ridden. A native of Oakland, California, Outlaw worked with its police department for almost 20 years before relocation to Portland, Oregon as its police chief… NEW YORK: The Queens Borough President Special Election is set for March 24. Election is called to fill vacancy created by former Queens Boro Prexy Melinda Katz, who is Queens District Attorney.
RIP: New Yorker Teddy Williams, Wadleigh JHS Class of 1964, passed away on December 1. Family and friends plan a memorial. Contact ddavis334@aol.com for an update.

A 2019 POSTSCRIPT: The big literary event was the August 2019 NY Times Magazine single-subject issue, “THE 1619 PROJECT,” 80 pages of historical essays and insights about the genesis of American slavery, its legacy, which endures and impacts contemporary race relations, by Black journalists and scholars like Harvard’s Khalil Muhammad, Wesley Morris and Jamell Bouie. Last year was the 400th Anniversary of the arrival of the first ship carrying 20-30 enslaved Africans to the colony of Virginia. The brainchild of NY Times staffers headed by Nikole Hannah-Jones, “THE 1619 PROJECT” exceeded all expectations. The Pulitzer Center has free PDF and lesson plans. NYT should have a book deal signed for the special edition.

2020 ARTS/CULTURE
FINE ARTS: Visit the Laurence Miller Gallery exhibit, “Cotton: Symbol of the Forgotten,” by John Dowell which “blends a unique mixture of spiritual, historical awareness, racial angst and deft technique to create photographic works that inspires the viewer to recognize the injustices imposed upon the Black community in NY for the past 400 years.” Dowell is Professor Emeritus of printmaking at Temple University. Exhibit runs through January 25 at the Miller Gallery, located at 521 West 26th Street, Manhattan.
Fine Artist/Professor Peter Wayne Lewis reports that two tenured track-teaching positions exist at the Massachusetts College of Art and Design in Boston, where he works. Interested artists are advised to visit the website www.massart.edu and apply.

A Harlem-based media and brand consultant, Victoria can be contacted at
Victoria.horsford@gmail.com