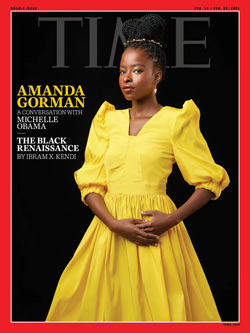 WINTER IN AMERICA
The Biden Presidency gathers momentum as he charts new ambitious course for his first 100 days. The President wants a Covid-19 relief plan with a $1.9 trillion stimulus price tag, and 100 million vaccination shots simultaneous with stemming the climate crisis. Change is in the atmosphere in American domestic and foreign affairs. Moreover, the Cabinet secretaries in State and the Pentagon are seasoned professionals knowledgeable of their jurisdictions. Someone thought of deploying the military in the vaccination distribution. This is not rocket science.

Pentagon chief Lloyd Austin has concerns about the large numbers of former military veterans and active police officers who were January 6 insurrection participants at the Capitol. The Secretary of State Tony Blinken is reviewing weapons order requisitioned by Saudi Arabia and the United Arab Emirates, which will impact war games and peace outcomes in their neck of the woods. Will Blinken name an African American as Under Secretary of African Affairs. There are so many moving parts to the American body politic.

The Trump second impeachment Trump trial began in the Senate this week. The impeachment charge is inciting people to riot at the 1/6/21 insurrection at the nation’s Capitol. President Biden has brought hope and promise back to the West Wing, which will translate to something akin to normalcy, whatever that looks like in our post-Covid19 world.

(My reading adventures all lead to the unabashedly political nature of all matters in our lives. Read between the lines in the items below!)

COVID19
Covid19 vaccination distribution and accessibility did not get off to a good NY start, especially for Black and Latino populations. Mayor De Blasio and Governor Cuomo are the vac-villains. Where was the fastidious planning and execution? Both attribute their failures to Black peoples’ suspicions about new drugs and meds. Liars! In January, more than 500 Black seniors got vac shots and transportation to and from God’s Battalion of Prayer Church in Brooklyn. For a fortnight, Harlem’s Abyssinian Baptist Church has been a vaccine destination. Citi Field in Queens Yankee Stadium in the and the Bronx’s Yankee Stadium are COVID vac-centers. Check cable station NY1 for updates.

NY restaurant owners and diners are excited about a green light for indoor dining — at 25% capacity. Interior dining is a welcome winter guilty pleasure, taking the edge off our year-long cabin fever. Prayerfully, vacs are effective, positivity numbers continue to travel South and “spreaders” infections will recede.

CORPORATE AMERICA
It’s Black History Month and Corporate America woefully lags behind the rest of the nation with regard to African American occupants in its C-Suites. By June 2021, there will be two African American CEOs among the Fortune 500 Corporate elite: Walgreen’s Rosalind Brewer and Lowe’s Marvin Ellison.

Rosalind Brewer, 59, Starbucks COO, was named CEO of Walgreen Boots Alliance (Nasdaq WBA), a global pharmacy-led health enterprise, and a Fortune 500 Company, effective March 15. Brewer’s CV begins at Kimberly-Clark as a scientist, then to Walmart East President, then CEO of Sam’s Club, which was followed by her stint at COO at Starbucks.

The number of Black CEOs at Fortune 500 companies shrinks. Kenneth Frazier, 66, drug maker Merck CEO/ Chairman since 2011, steps down on June 30, after 29 years. He moved up through the ranks at Merck, beginning as general counsel. He acquired another drug maker Schering-Plough, whose inventory included the best-seller cancer drug Keytruda. Frazier remains on the Merck Board as Executive Chairman until transition is completed.

Robert Ferguson, CEO/President of TIAA, Teachers Insurance & Annuity Association of America, another FORTUNE 500 company, steps down on March 30. A former Vice Chair of the Board of Governors of the US Federal Reserve, Ferguson earned a BA, JD and PhD in economics from Harvard, and is a household name in world-wide economic and academic circles. It is speculated that he made Biden’s short list for Secretary of the Treasury.

Black American women are among the coveted 2021 Nobel Peace Prize nominees, which includes The Black Lives Matter movement which promotes a new consciousness about racial justice in the US and beyond, and for Stacey Abrams and her Fair Fight Action group, which promotes nonviolent change at the ballot box, causing an upset in Georgia’s elections last year, delivering a major victory to Democrats in the Presidential and US Senate races. Abrams ran unsuccessfully for Georgia governor in 2018 and lost by less than one percentage point. Most Democrats believe that the GOP stole that election from her. A possible Nobel Prize hovers this year and then there is the 2022 Georgia gubernatorial race!

BOOK TALK: “IN THE EYE OF THE STORM: My Time as Chairman of Bank of America During the Country’s Worst Financial Crisis,” a memoir by African American Walter E. Massey about the 2008 banking fiasco, co-written by Rosalind Kilkenny McLymont with a foreword by Dr. Ruth J. Simmons. Who knew that BOA, the world’s 8th largest bank, had a Black Board Chair Dr. Massey, a former Morehouse alum and President, holder of a PhD in Physics from George Washington University, St. Louis. This memoir should appeal to Black book club members and American Corporate history buffs alike.

The Harlem-based NYUL is an affiliate of the National Urban League, the historic civil rights organization, founded in 1910, which has been at the forefront of the fight for social justice and racial equality. NYUL has been front stage center from the onset of COVID19 pandemic, the recipient of generous grants which it distributes directly to needy families confronting rent and food crises.

HAPPY VALENTINE’S DAY!
A Harlem-based brand and media consultant, Victoria can be reached at victoria.horsford@gmail.com