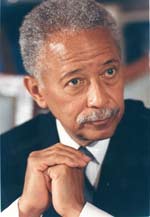 RIP: David N. Dinkins
1927 to 2020
Elder statesman David Dinkins 93, passed away at his home on the Upper East Side, on November 23, David Dinkins was the 106th Mayor of the City of New York, its first and only African American mayor. New York was the last of the nation’s top 10 cities to elect a Black mayor. Sworn in on January 1990, New York City was in decline, quality of life issues, rampant crime, homelessness, a crack epidemic, economic woes and racial divides. He was elected in 1989, the year when a white Central Park jogger was raped presumably by Black teens and when a Black teen male was killed by white thugs in Brooklyn. What NYC needed then was a second coming, not a new mayor. Mayor Dinkins had to deal with a recession with shrinking budgets as the social order was in decline. He slashed programs but kept cultural life afloat,and managed to rehab housing in Harlem, the Bronx and Brooklyn and expand health care access while appealing to the city’s myriad constituencies, Blacks, whites, Latinos, the aged, gays and lesbian community. He brought back dignity, decency to City Hall and a sense of our shared humanity, a major part of his legacy.

Mayor Dinkins embodied so much of the city’s history with enough back stories for a sequel to his engrossing memoir “A MAYOR’S LIFE: Governing New York’s Gorgeous Mosaic.” Trailblazer, Peacemaker are among obit descriptions about History Maker, David Dinkins, the man from Trenton, NJ, who attended Howard University, married Joyce Dinkins, who transitioned 6 weeks ago; and was a member in good standing of Harlem’s Gang Of Four power elitists, Sutton, Paterson, and Rangel.

POST NOV. 3 AMERICA
The Dow is trading above 30,000, on 11/24, a first in US history. Trading is attributable to COVID Vaccine News and the Biden Transition of Power!!!!!!!!!
On 11/23, the General Services Administration acknowledged the US presidential election outcome. Team Biden officially has access to government resources. That day media was inundated with news of some of President-elect Biden’s cabinet nominees. They are Antony Blinken, State: African American Linda Thomas-Greenfield, Ambassador to the UN, as a cabinet post; Alexandro Mayrokas, Homeland Security, a first for a Latino, and immigrant; Janet Yellen Treasury. Some still in the speculative stage include Federal Appeals Judge Merrick Garland, Obama US Supreme Court nominee eschewed by US Senate, Attorney General; Michele Flournoy and African American Jeh Johnson, Obama’s Secretary of Homeland Security, for Defense Secretary. Thought that Susan Rice would have gotten Secretary of State nod. Cannot find Stacey Abrams’ name in any of the predictions.

Read that a Native American should be considered for Interior Secretary. It looks like DNC Chair Tom Perez will join the Biden cabinet. It is rumored that Jaime Harrison, SC contender for US Senate could succeed Perez at DNC.

NYC Mayor de Blasio could lose a revenue source, the sale of real estate tax and water liens, a practice approved by the NYC Council, which ends 12/31/2020. Will Council members extend a measure which disproportionately impacts small home owners, a few months before 35 of them, will be term-limited in 2021 and must start job searches? NYC First Lady Chirlane McCray told NY1 TV host Cheryl Wills that she will not run for Brooklyn Boro Presidency next year. Wonder why? NYC Councilmen Robert Cornegy and Antonio Reynoso and NYS Assemblymember JoAnn Simon will compete for the Brooklyn Boro Presidency.

ARTS CULTURE
BOOK TALK: The Dead Are Rising: The Life of Malcolm X by Les Payne and Tamara Payne wins the 2020 National Book Award for nonfiction. Tamara Payne says the award is bittersweet moment. A labor of love, the biography was written by her dad with research assist by Tamara, who completed the manuscript after Les died in 2018.

FILM: The 27th Annual NY African Film Festival goes virtual, under the banner of “STREAMING RIVERS – The Past Into The Present,” it puts the spotlight on films from Nigeria and the Sudan, including six features and eight shorts, runs from December 2-6. Visit filmlinc.org/AFF2020.