City Politics News around the Web

What Was Project Mercury?
Advertisement 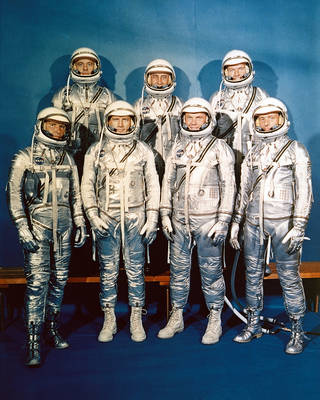 This article is part of the NASA Knows! (Grades 5-8) series.


Project Mercury was the NASA program that put the first American astronauts in space. Astronauts made a total of six spaceflights during Project Mercury. Two of those flights reached space and came right back down. These are called suborbital flights. The other four went into orbit and circled Earth. The first of those six flights were made in 1961. The last flight was made in 1963.

What Spacecraft Was Used for Project Mercury?
The Mercury spacecraft was designed for this project. It was a small capsule with room for one astronaut. The astronaut stayed in his seat during the flight.

Two types of rockets were used for Project Mercury. The first two of the six flights with an astronaut on board used a Redstone rocket. The four manned flights that orbited Earth used an Atlas rocket. Both of these rockets were originally designed as missiles for the United States military.

Credits: NASA
Ham the chimpanzee made his Mercury flight in a special
seat.

The project was named Mercury after a Roman god who was very fast. Each astronaut named his spacecraft. Alan Shepard included a 7 in the name of his Mercury capsule. This was because it was the seventh one made. The other astronauts included a 7 also. This was in honor of the seven astronauts chosen for the project.

Who Were the Mercury Astronauts?
NASA selected seven astronauts for Project Mercury in 1959. Choosing the astronauts was one of the first things NASA did. The agency was only six months old when it chose them.

Alan Shepard made the first Mercury flight. That flight made him the first American in space. The 15-minute flight went into space and came back down. His Mercury capsule was named Freedom 7. Years later, Shepard walked on the moon as commander of the Apollo 14 mission.

The second American astronaut to orbit Earth was Scott Carpenter. His spacecraft was named Aurora 7. Astronaut Wally Schirra (Shuh-RAH) made the fifth Mercury flight on Sigma 7. Gordon Cooper flew on the last Mercury mission. He spent 34 hours circling Earth in the Faith 7 capsule. Astronaut Deke Slayton was also selected as one of the “Mercury Seven” astronauts. A health problem stopped him from flying a Mercury mission. He flew into space in 1975 in the Apollo-Soyuz Test Project.

How Did NASA Make Sure Mercury Was Safe?
Before astronauts flew in Project Mercury, NASA conducted several test flights. These launches did not have people aboard. The test flights helped NASA find and fix problems.

The first Atlas rocket launched with a Mercury capsule exploded. The first Mercury-Redstone launch only went about four inches off the ground. From these flights, NASA learned how to fix the rockets and make them safer.

Three other “astronauts” also helped make sure Mercury was safer. A rhesus monkey, Sam, and two chimpanzees, Ham and Enos, flew in Mercury capsules. Sam and Ham made suborbital flights. Sam flew on a “Little Joe” rocket. Ham flew on a Redstone rocket. Enos launched on an Atlas rocket. He made two orbits around Earth. Since all three primates made it home safely, NASA knew it was safe for astronauts.

After Mercury, came the Gemini program. The Gemini spacecraft had room for two astronauts. NASA learned even more with Gemini. Together, Mercury and Gemini prepared NASA for the Apollo program. During Apollo, NASA landed human beings on the moon for the first time.